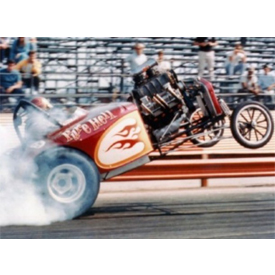 The Quarter Mile Foundation will be celebrating some of the most iconic drag racers during the Oct. 30-Nov. 2 SEMA Show.

Attendees of the SEMA Show will be able to meet drag racing legends at The Quarter Mile Foundation Booth (No. 10010) stationed in the Las Vegas Convention Center Grand Lobby across from the SEMA store in the North Hal.

Headlining the drag racing personalities visiting the booth will be Steve and Cindy Gibbs, founders of the Nitro Revival.

Steve Gibbs’ impact on the sport of drag racing is without peer, according to Quarter Mile Foundation. His lengthy resume includes 48 years with NHRA, first as National Dragster advertising director, then rising up the ranks to vice president of competition. From there Gibbs was the driving force behind the creation of the Wally Parks Motorsports Museum and the creation and operation of the NHRA California Hot Rod Reunion. He was presented with the 2018 Global Achievement Award by the British Drag Racing Hall of Fame.

At a time when most people would be slowing down to enjoy retirement, Gibbs and a group of like-minded enthusiasts have embarked on a new adventure. Established in 2017, Nitro Revival recreates the sights and sounds of the early days of drag racing and hot rodding, and features fully-restored, nitro-burning relics from the sport’s golden age. The Revival also serves as a reunion for racers from that golden era, giving fans the experience of a drag racing museum come to life.

In 1968, Pure Hell reset the Fuel Altered top speed record by reaching 207 MPH after a new Hemi was install for the NHRA Winternationals.

In addition, SEMA attendees will have the opportunity to meet with Pro Stock Driver Ralph Woodall. Woodall began racing in 1976 with a big block Camaro in Super Stock. By 1978, he added a second Super Stock Car and raced under the Budweiser banner.

In 1986 Woodall retired from drag racing to focus on building new business, which led to significant developments and patented inventions for motorsports and for the automotive industry.

Hand Grenade Hibler
The Quarter Mile Foundation will close out the SEMA Show “with the experience of a lifetime,” according to the group. During Nov. 2 SEMA Ignited event, attendees will be able to experience Harry “Hand Grenade” Hibler firing up the Tony Nancy Sizzler Dragster.