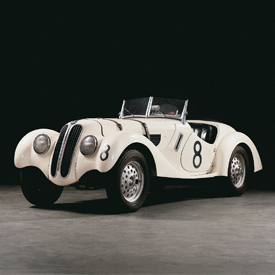 LeMay-America’s Car Museum (ACM) has launched a crowdfunding campaign to help bring the BMW Car Club of America Foundation’s Heroes of Bavaria – 75 Years of BMW Motorsports collection to ACM on May 12. The 17 iconic race cars in the display will celebrate and detail BMW’s storied motorsports legacy.

ACM has stated that crowdfunding backers will enjoy benefits including passes to the exhibit’s opening celebration, limited edition posters and books, private tours of the ACM collection and the ability to adopt-a-winner. Additionally, one individual will also be able to purchase an exclusive one-day experience at a BMW performance driving school to learn about the theory, physics and mechanics of performance driving.

“As proven by the extraordinary collection of race cars within the Heroes of Bavaria exhibit, BMW rightfully earns the title of the ‘Ultimate Driving Machine.’ Their vehicles have been tried-and-tested on race tracks for the last 75 years,” said Adam Langsbard, CEO of America’s Automotive Trust. “We’re thrilled to be the first to display this unrivalled collection on the West Coast and share BMW’s many motorsports accomplishments with the hundreds of thousands of guests who visit ACM each year.”

The Bavarian-themed grand opening celebration at ACM is set for May 12.

As part of the festivities, ACM Master Collector Peter Gleason will moderate a live discussion with notable BMW figures including:

For those who cannot make the evening opening, ACM Curator of Exhibitry Scot Keller will be leading an exclusive early entry Curator Talk & Tour on the morning of May 13, in which he will delve into BMW’s history and provide expert insight to the remarkable vehicles on display.

“The Heroes of Bavaria exhibit celebrates the history of BMW racing by featuring noteworthy race cars beginning with the infamous 328,” Keller said. “The two-liter 328-arguably one of the most successful sports cars of the 1930s-is just one of example of BMW’s motoring legacy, having achieved a class win in the celebrated Mille Miglia in 1938 and an overall victory in 1940.”

Other notable vehicles will include the very first 1961 700 RS, a 1972 3.0 CSL Groupe 2 Rally Car-the only one of its kind-and a 2000 Williams Formula F1 driven by Ralf Schumacher in eight total races, achieving three podium finishes.

The full collection, which rounds out the 17 total vehicles, will also include: