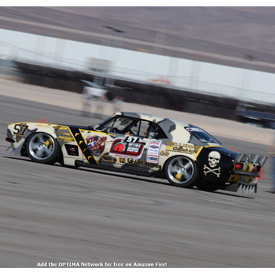 Mike DuSold and his 1967 Chevrolet Camaro was awarded as the 2018 Ultimate Street Car at the 11th annual OPTIMA Invitational at Las Vegas Motor Speedway this past weekend.

“It feels pretty surreal to be the 2018 OUSCI winner,” DuSold said. “Five years ago, when I first started competing it was my goal to someday win. It has been a challenge and has pushed me to the brink more than once, so getting here feels very good.”

The event class winners were:

Each competitor received points as they competed in the challenges-their scores were totaled to determine the winner in each category. Austin Barnes took second place overall this year, competing in a 2010 Dodge Viper; and Ken Thwaits came in third place in a 2006 Mitsubishi Evo. The top three winners for the individual competitions include:

The 2018 OPTIMA Ultimate Street Car Invitational will broadcast on MAVTV at 8 p.m. EST on Nov. 30.