Performance lubricants company Champion Oil will display a rare 1962 Shelby AC Cobra in its booth #24217 at the 2018 SEMA Show in Las Vegas.

The Cobra is one of a handful produced by Shelby American to honor the golden anniversary of the iconic CSX 2000, the first Shelby Cobra ever built and one of the most valuable sports cars in the world today, according to the company.

The car sold at auction a few years ago for $14 million.

One of only two aluminum-bodied models with an original new old stock 289-ci, 350-hp HiPo engine with two four-barrel carburetors and an original Shelby intake manifold mated to an original NOS T-10 manual transmission and shifter, the car is a genuine Shelby American Inc. Cobra that is registered and authenticated with the proper CSX numbers and a statement of manufacturer’s origin signed by Carroll Shelby himself.

The cars were offered only in black with Rosso red leather-covered seating surfaces, dash covering and map pockets. The carpets are wool Mercedes Wine in material and color.

The design is derived from the original 1962 styling, with only a few factory options and improvements over and above the original product. Among the improvements are a stronger steel tube frame, better alloys for the components, improved cooling, additional heatshield, superior brakes, plus rack-and-pinion steering, the company noted. 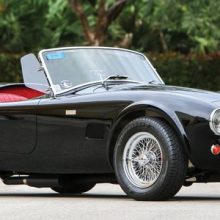