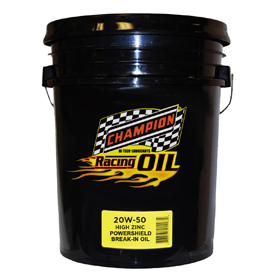 Champion Oil with the help of top-tier engine builders has developed two new PowerShield motor oils specially designed to reduce the potential of engine failure during hard break-in, according to the company. These purpose-built, mineral-based lubricants are offered in SAE 10w-40 and 20w-50 viscosities.

These multi-viscosity break-in oils also are formulated with polymer thickeners. This allows the use of a thinner viscosity base oil for easier cold starting and reduced friction. During break-in and heat cycles, as the oil heats up, the polymer thickener untangles and interacts with the base oil to allow the lubricant to behave like a more viscous oil at operating temperature, according to Champion.

Dispersants and other additives are put in the break-in motor oils to help keep the engine clean. Any wear particles generated by the piston rings, cylinder walls and other moving/sliding parts as the engine breaks in will be suspended and carried away by the oil to the oil filter, according to the company.

Professional engine-builders that use Champion PowerShield Break-In Motor Oil will experience the difference provided by numerous barriers of protection. These new products are field tested and suitable for use in all high performance and racing type engines that typically run an SAE 10w-40 or 20w-50 racing oil, according to Champion.