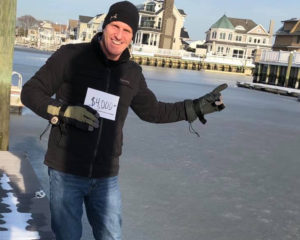 “What would it take for me to jump into the frozen waters of the bay and who can benefit from my craziness?”

Miller also serves as event manager for Corvettes at Carlisle, and foundation president at the Chip Miller Amyloidosis Foundation.

Miller took to Facebook to solicit donations for his beloved Chip Miller Amyloidosis Foundation and found that his faithful followers were eager to see him strip down to little more than board shorts to take the plunge.

At first, Miller asked for $1,000.  That total was reached with ease, then as the dollar amounts climbed, there were additional enticements, like friends of the foundation jumping in and if by chance $7,500 was reached, a Speedo was discussed. As the donation window played out, the Speedo never happened, but the plunge sure did.

The time was right for a jump into the deep freeze during the afternoon of Feb. 1. It was snowing, temperatures were in the 20s and some of the people who said they’d do it bailed, as Miller forged on. With his wife, daughter and friends egging him on, Miller jumped feet first (and topless) into the bay. He stayed in for about 7 seconds before running as fast as he could on the snow-covered deck to a dry towel.

When the dust settled, Miller walked away with redness on his chest, abrasions from the ice on the sides of his torso and more than $4,000 raised for the Chip Miller Amyloidosis Foundation.

“My father was my best friend and I watched him sacrifice and give so much of himself personally and professionally,” Miller said. “It didn’t matter if he was healthy and happy at a Corvette event or weakened by Amyloidosis, dad was always giving and I wanted to do what I could to give back and honor my father’s legacy.

“So, I woke up one morning and thought, it’s cold, I should jump in this water, but if I’m going to do it, I want to be sure my crazy actions benefit the foundation. The power of social media is amazing, because when I reached out and asked for donations, I had no idea that my simple goal of $1,000 would be blown away to the tune of over $4,000