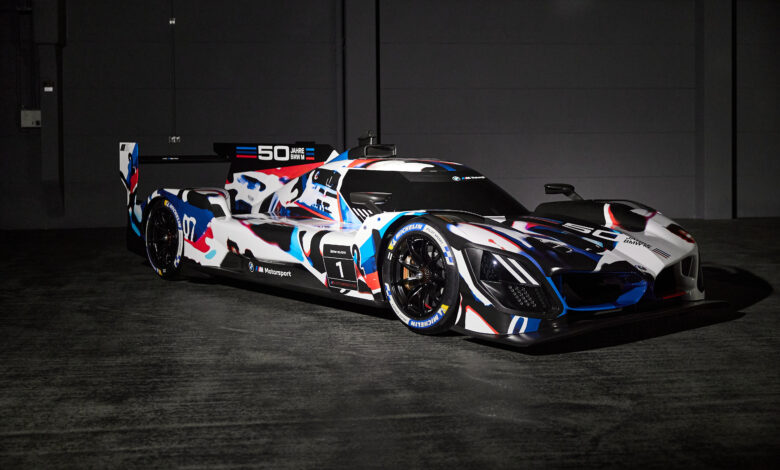 Ahead of the testing phase for the LMDh prototype for the 2023 season in the IMSA WeatherTech SportsCar Championship, BMW M Motorsport has revealed the name and design for the car, the company announced.

The BMW M Hybrid V8 will sport a look designed by BMW Group Designworks, and celebrates the history of BMW M Motorsport in North America while remaining recognizable as a BMW M car, designers said.

“The most critical task and the greatest challenge for the design team in the LMDh program design team was that the prototype must be clearly recognizable as a BMW M Motorsport car. And I can say this to all the fans, just one look is enough to confirm that the BMW M Hybrid V8 is a BMW,” said Franciscus van Meel, CEO of BMW M GmbH. “It clearly carries the genes of BMW M. I also love the camouflage livery with its references to the great history of the brand in North America. Congratulations to the design and aerodynamics departments at BMW M Motorsport and Dallara on their great work. I can hardly wait to see the BMW M Hybrid V8 on the track soon.”

The hallmark of the design for the BMW M Hybrid V8 is the wide kidney grille. In addition, it boasts typical BMW M design elements such as the nested 50th anniversary logo on the hood, twin BMW icon lights, dynamic body side, Hofmeister kink window graphic, M ‘hook’ mirrors and the taillights.

The camouflage livery in which the BMW M Hybrid V8 will complete its testing also contains elements from BMW’s racing history in North America, the company said. The images of BMW racecars – the 1976 BMW 3.0 CSL, the 1981 BMW M1/C, the 1978 BMW 320i Turbo, the 1986 BMW GTP, the BMW M3 E36 GTS-2, the BMW Z4 GTLM and the BMW M8 GTE – create a graphic mosaic which is also meant to obscure the shape of the BMW M Hybrid V8 during development testing.

“My team’s job was to make the BMW M Hybrid V8 look like a BMW, and embrace every opportunity to make it also perform like one on the race track,” said BMW Group Designworks Global Automotive Director Michael Scully. “The design is rooted in BMW’s DNA of purposeful, efficient performance, and the exterior’s bold, determined character invokes BMW’s frontiersmanship of turbo power; now united with an optimized hybrid electric powertrain. The camouflage livery celebrates the 50 Years of M by commemorating the great cars of BMW’s storied history in IMSA racing while uniquely cloaking the BMW M Hybrid V8’s future-facing exterior geometry and technologies during the critical on-track development phase of the project. If you look closely you’ll discover multiple winners of the Daytona 24 Hours, as well as the very first purpose-built IMSA GTP car from 1981: the BMW M1/C. We’ll follow-up this camouflage with a Works livery that exemplifies the dynamism and excitement of hybrid electric-powered competition.”