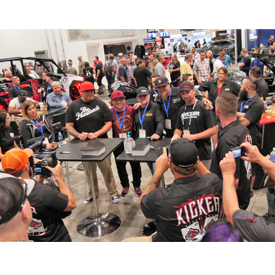 More than 40 elite builders throughout the show have KICKER gear as their audio partner of choice, according to the company. Weaver Customs, Kindig-It Designs, Classic Car Studio and RMD Garage are among the world-class vehicles that feature KICKER audio products in their builds this year.

Kindig-It Design is returning to the KICKER booth to reveal its one-off Hummer H2 at 9 a.m. on Oct. 30. Stars of Velocity’s Bitchin’ Rides, Dave Kindig and Kevin “Kev Dogg” Schiele will be onsite, as well as the full Velocity film crew covering the event.

The 2019 GMC Sierra also will highlight the new MultiPro Tailgate System, which now features KICKER Audio as an exclusive option available at dealerships. The system automatically deactivates when the tailgate is lifted, according to the company.

Also featured in the booth will be  GoodGuys Gold Award-winning shop SicChops, which is bringing a 1961 VW Bus, complete with four KICKER Hideaway compact subwoofers, a KX-Series amplifier and Q-Series component speakers.

KICKER’s both will be busy with celebrity signings. On Wednesday from 11:30 a.m. to 12:30 p.m., the Mod Kids USA elite kart-racing team stops by to meet dirt-track fans. Then from 1 p.m.-3 p.m., the stars of Discovery Channel’s Street Outlaws will be at the KICKER booth. Chuck “Death Trap” Seitsinger, Ryan “Fireball” Martin and Jeff Lutz will meet fans and sign autographs.

On Thursday, more Street Outlaws starts are set to visit the booth, starting with Farmtruck and AZN from 10 a.m.-11 a.m. Then from 1 p.m.-3 p.m., Justin “Big Chief” Shearer, Shawn “Murder Nova” Ellington and “Daddy Dave” Comstock will be shaking hands and signing autographs.