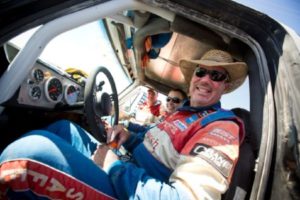 BILSTEIN has announced a three year partnership as the official shock of the NORRA Mexican 1000 rally. The Mexican 1000 is a multi-stage race that honors the roots of Baja racing.

This year’s Mexican 1000 was preceded by two days of technical inspection presented by BILSTEIN on April 20 in Ensenada. Stage one headed east to San Felipe, then south on the Baja Peninsula. Overnight stops followed in Guerrero Negro (bikes only), Bahia de Los Angeles, Loreto, and La Paz. The final destination of the event is San Jose del Cabo.

“Winning a Madonna award gives worldwide exposure to the recipient,” said Emil Foldager of BILSTEIN. “The winner will be announced in press releases and race coverage from BILSTEIN, and the international media. We are so excited to be a part of the NORRA Mexican 1000. NORRA created the sport of off-road racing in 1966, and BILSTEIN has been a part of the sport the entire time. Our involvement will continue to expand next year and into the future.”