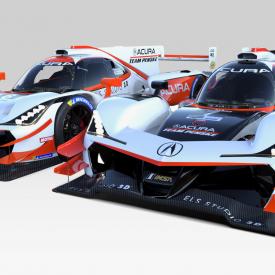 According to Acura, this year’s IMSA Acura Team Penske ARX-05 prototypes are an updated take on the iconic design first seen on the 1991-’93 Camel Lights champion Comptech Racing Spice Acura NSXs. The prototypes are the work of Acura executive creative director Dave Marek, who has been responsible for the liveries on numerous Acura racing machines.

The driver lineup is set to include Dane Cameron, Juan Pablo Montoya and Simon Pagenaud in the No. 6 Acura Team Penske ARX-05; and Helio Castroneves, Ricky Taylor and Alexander Rossi in the No. 7 Acura ARX-05.

“This is a natural look for Acura prototypes and a salute to our heritage as a performance brand,” said Marek. “The Acura brand was founded in 1986 and its debut in motorsports soon followed. Today, we’re proud to unveil a livery that accurately reflects our long, successful history in North American racing-and look forward to adding new chapters to the story of Acura Precision Crafted Performance.”

According to the company, Acura will have a strong presence in the WeatherTech SportsCar Championship with Acura Team Penske’s pair of ARX-05 prototypes and a brace of Acura NSX GT3 EVOs run by Meyer Shank Racing in the GT Daytona (GTD) class.