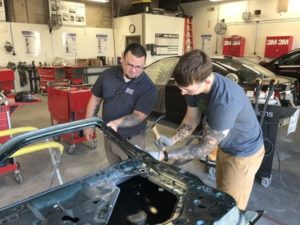 Caliber Collision has opened its Changing Lanes Falcon Academy for Ft. Carson soldiers in Colorado nearing the completion of their military service. The training program was created to teach soldiers skills for a successful new career in the fast-growing collision repair industry.

Applications are now being accepted for Changing Lanes Falcon Academy classes. The first cohort started Aug. 28, with additional classes every seven weeks with 14 positions available in each. Participants in Changing Lanes receive free training, certification and employment opportunities prior to transitioning out of the U.S. Armed Forces.

Upon successful completion of the 18-week program-featuring a combination of class instruction and hands-on training-participants receive employment offers at Caliber locations throughout Colorado and nationwide. Each graduate also will receive a $12,000 toolbox to jump start their careers.

“We appreciate all of our community partners who work to help our transitioning soldiers,” said Mike Webb, Fort Carson director of human resources. “Industry knowledge and skills that can help bridge the gap greatly assists them in their transition to the civilian life.”

“Changing Lanes is an absolute win-win for our military heroes and Caliber,” said Steve Grimshaw, Caliber Collision CEO. “Transitioning soldiers gain valuable skills to jump start a rewarding collision repair career. Caliber Collision benefits from bringing on board teammates whose military training and background mirrors our core values and our commitment to provide complete satisfaction as we restore the rhythm of lives.”

More than 100 service members to date have graduated from Caliber Collision’s Changing Lanes programs at Ft. Bragg and Ft. Hood. Caliber Collision anticipates enrollment of 50 additional soldiers by the end of this year at Ft. Hood, Ft. Bragg, Ft. Carson and other military installations throughout the country. The company’s overall goal is to train 300 soldiers per year.

Those interested can apply to the military service training program by emailing ChangingLanes@CaliberCollision.com.