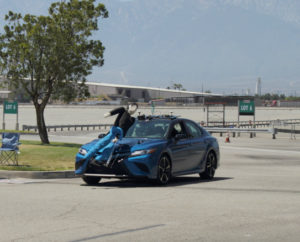 New research from AAA reveals that automatic emergency braking systems with pedestrian detection perform inconsistently, and proved to be completely ineffective at night. An alarming result, considering 75% of pedestrian fatalities occur after dark. The systems were also challenged by real-world situations, like a vehicle turning right into the path of an adult. AAA’s testing found that in this simulated scenario, the systems did not react at all, colliding with the adult pedestrian target every time. For the safety of everyone on the road, AAA supports the continued development of pedestrian detection systems, specifically when it comes to improving functionality at night and in circumstances where drivers are most likely to encounter pedestrians.

On average, nearly 6,000 pedestrians lose their lives each year, accounting for 16% of all traffic deaths, a percentage that has steadily grown since 2010.

“Pedestrian fatalities are on the rise, proving how important the safety impact of these systems could be when further developed,” said Greg Brannon, AAA’s director of Automotive Engineering and Industry Relations. “But, our research found that current systems are far from perfect and still require an engaged driver behind the wheel.”

While time of day and location are contributing factors to pedestrian fatalities, vehicle speed also plays a major role. Previous research from the AAA Foundation for Traffic Safety found that pedestrians are at greater risk for severe injury or death the faster a car is traveling at the time of impact.

In partnership with the Automobile Club of Southern California’s Automotive Research Center, AAA evaluated the performance of four midsize sedans equipped with automatic emergency braking with pedestrian detection to determine the effectiveness of these systems. Testing was conducted on a closed course using simulated pedestrian targets for the following scenarios:

An adult crossing in front of a vehicle traveling at 20 mph and 30 mph during the day and at 25 mph at night.

A child darting out from between two parked cars in front of a vehicle traveling at 20 mph and 30 mph.

A vehicle turning right onto an adjacent road with an adult crossing at the same time.

Two adults standing along the side of the road with their backs to traffic, with a vehicle approaching at 20 mph and 30 mph.

Overall, the systems performed best in the instance of the adult crossing in front of a vehicle traveling at 20 mph during the day. In this case, the systems avoided a collision 40% of the time. But, at the higher speed of 30 mph, most systems failed to avoid a collision with the simulated pedestrian target.

In general, the systems were ineffective in all scenarios where the vehicle was traveling at 30 mph.

At night, none of the systems detected or reacted to the adult pedestrian.

“The rise in pedestrian deaths is a major concern and automakers are on the right path with the intent of these systems,” continued Brannon. “Our goal with this testing is to identify where the gaps exist to help educate consumers and share these findings with manufacturers to work to improve their functionality.”