Lithium is the new ‘kryptonite’ of battery technology. Light and powerful, with higher ignition start voltage and higher cranking amps—even down to 10% charge—makes this technology a must have for racers of all stripes. You lose more weight with a lithium battery and for less money than anything else! 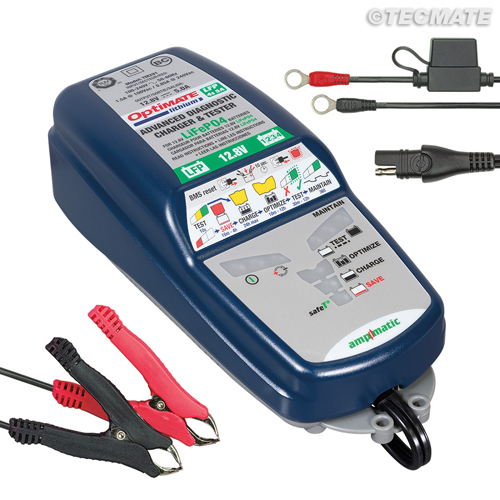 This is also a dealer’s dream battery. There’s no in-store maintenance required as its self-discharge rate is so low it will take years to drain, but even that does not really matter as it has no memory effect – even if drained down to 20-30%, it has no effect on battery health.

Lithium can also accept very high charge current, up to 1C (or 1 x it’s Amp-hour rating e.g. a 10Ah battery can accept 10 Amps), which means it can be recharged within 1 to 2 hours. 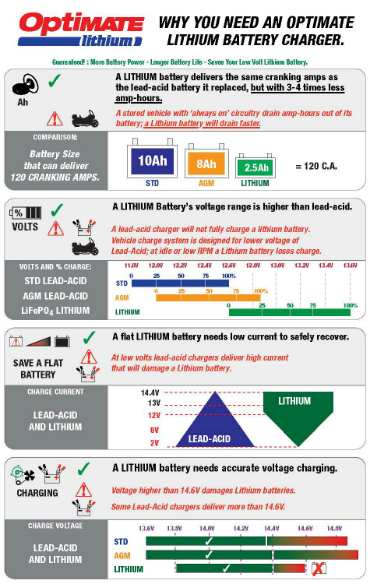 Some battery manufacturers build in protection, known as a battery management system (BMS), that will help prevent damage, but the Achilles’ heel of LFP battery is overcharge and secondly, deep discharge below 10V. Both can drastically shorten life if not taken care of correctly.

VIDEO: 4 Facts — Why You Need an OptiMate Lithium Battery Charger

The right kind of charging matters most, both in the vehicle and during storage. First off, make sure the vehicle’s charging system delivers no more than 14.5V. LFP batteries without BMS can take 14.5 to 15V for short periods, but any kind of sustained charging above 15V will be fatal. A battery with BMS can accept a little higher for short periods, but the excess energy is burnt off by the BMS and that still causes heat inside the battery.

Secondly, LFP batteries need a maintenance charger more than lead-acids, mainly because it has less Amp-hours to give, on average down to a 1/3 of the equivalent lead-acid. In the vehicle it will drain much faster and once it is drained below 10V, it needs special care.

Storage charging itself is also different. Best practice is to charge it up and leave it to drain a little, then charge it up, but never letting it discharge below 30% (13V) so you can start that vehicle and keep the battery healthy. Or, get the right charger that can do that automatically.

For 25 years, TecMate has developed and manufactured professional and consumer battery chargers, battery testers and engine troubleshooting and tuning tools as well as CABLE, USB and LED accessories for the powersport and automotive industries.

TecMate offers these high-margin products to dealers and wholesale distributors and is backed by a MAP policy and OptiMate’s stable multistep reselling strategy that continues to gain partners and put money into their pockets. Visit tecmate.com for more information.

Deep discharge (10V and lower) presents a problem as lithium is sensitive to high current at low volts, so tip of the day, do not jump start that battery. Rather, charge it. Lithium need a special controlled slow charge to get up to 12.8V (around 10% state of charge) before it can once again accept normal charge current. To get it back to 100%, the 4 cells need balancing, so they end up equal, but without any of the cells being overcharged. That’s rather tricky.

That’s where Optimate Lithium battery chargers come into their own. They do all of that automatically, from as low as 0.5 Volts to save that battery and then bring it to full charge, all the while testing it for good health. The first OptiMate Lithium 4s 5 Amp battery charger (model TM-291) was developed in 2010 and has become the most recommended charger by motorcycle vehicle OEMS (Honda, Yamaha, Kawasaki, KTM, Husqvarna and Ducati), as it is in powersport where lithium starter batteries first made their mark. Then, drag racers discovered 16V lithium batteries work better than lead-acids and that has made the OptiMate Lithium Select (model TM-271) for 12.8V or 16V batteries the go to charger of choice.

The latest OptiMate Lithium 4s 10A (model TM-275) is for the motorsport enthusiast that wants to play around with different ignition maps but needs support power to keep that battery charged while they do it. The 13.6V Tune mode power supply supports the battery and keeps it ready to start that engine when the new map is ready for testing.

Best of all, no matter the size of the battery, all you need to do is hook up your OptiMate Lithium and its AmpMatic micro controller will regulate current according to battery size and health. OptiMate Lithium, the right kind of race fuel for your Lithium battery.