Those who have experienced coolant loss due to high pressure and boil-over, corroded cooling system components, scaling, and pitting from electrolysis, can blame a common culprit: water. Here’s how water can turn into a race team’s worst enemy.

At the risk of stating the obvious, the simplest way to get past the performance limitations and challenges of water (low boiling point and corrosion) is to eliminate the water. Simple enough, right? But water has been used for more than 100 years for a reason: Nothing transfers heat better than water.

Water is a superior heat transfer fluid until it reaches its boiling point and loses 96 percent of its thermal conductivity. When water stops being water, problems occur when the coolant approaches its boiling point and steam bubbles form at hot metal surfaces, creating a vapor barrier between the liquid and metal.  Less heat is removed from the engine, the metal gets hotter, more bubbles form, and the cycle continues.

Pressure builds until steam and hot coolant find an escape through the radiator or a burst hose. 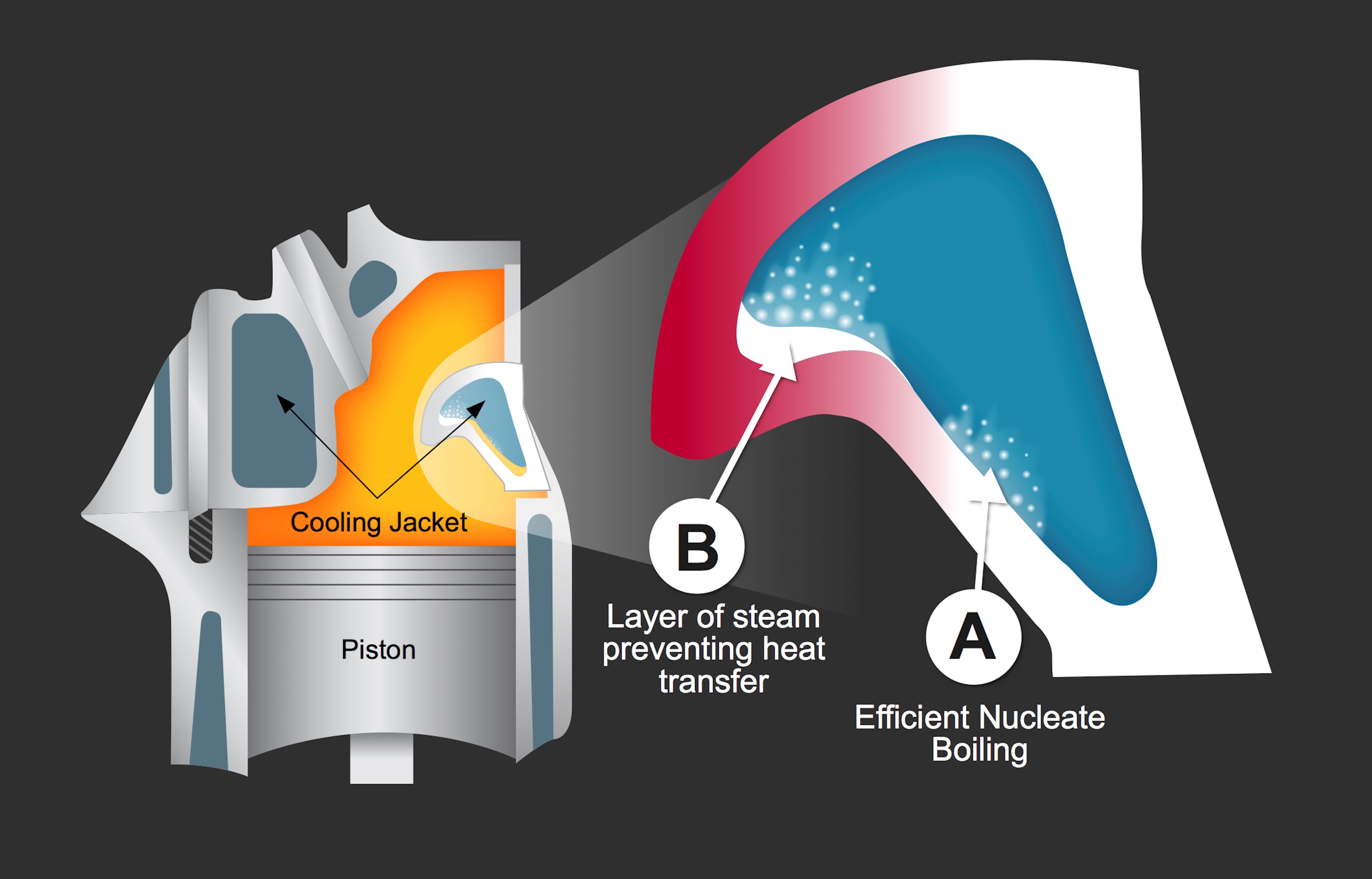 When water turns to vapor it retains only 4 percent of water’s ability to transfer heat.

When water continues to be water, it can actually eat away at cooling system metals. That’s because when heated water releases a significant amount of dissolved oxygen, but as it cools it reabsorbs fresh oxygen. This cycle leads to the corrosion of metal and can be accentuated over time as corrosion inhibitors drop out of solution.

Electrolysis damage in an engine cooling system is caused by unintended electrical currents that flow from voltage differences that exist in the engine coolant jacket, the radiator, and the heater core. The damage can include rapid corrosion, pitting, flaking, and pinholes. The voltage differences may result from poorly grounded electrical equipment that has a stray voltage problem.

Another source of electrolysis is from dissimilar metals where the coolant is in contact. When two of them come into contact in an electrolyte, one acts as a cathode and the other as an anode, and water acts as an electrolyte. The engine coolant is the conductive path that promotes galvanic corrosion, causing pitting erosion and pitting of metal, or electrolysis damage.

The coolant has a boiling point of 375 degrees, more than 150 degrees above normal operating temperatures. It remains in its liquid state and ensures constant liquid-to-metal contact, prevents hot spots, and assures consistent heat transfer. With lower pressure, coolant leaks less are likely to occur, but in the event of a leak, Evans HPC will be a slow drip, rather than a high pressure, high volume expulsion of hot coolant.

And unlike water-based coolants, Evans does not promote corrosion and electrolysis, and will protect an engine’s metal components during the offseason.  Sportsman racers save a lot of time not having to drain the cooling system for winter storage.

Evans waterless coolants are silicate- and nitrite-free, and avoid water-caused corrosion. The coolants also measure less than 20 percent of the conductivity of typical water-based coolant to sharply reduce incidents of electrolysis.

The conversion from a traditional water-based coolant to Evans coolant requires the near-complete removal of a car’s old coolant, as long as the final water content is 3 percent or less. Evans also provides a waterless Prep Fluid and complete instructions on the website.