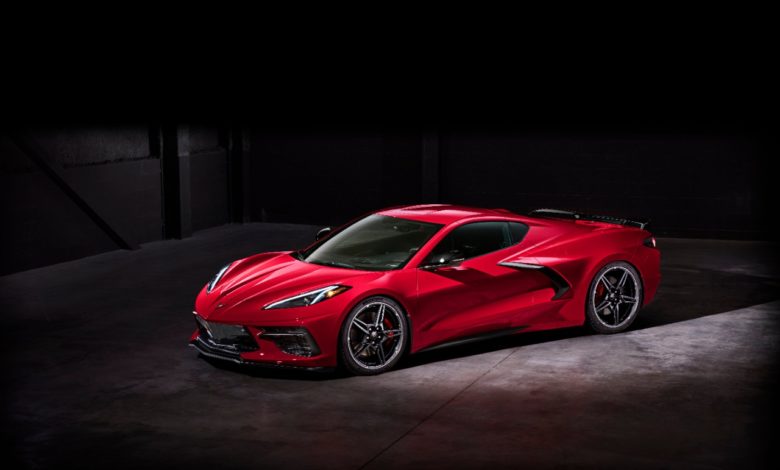 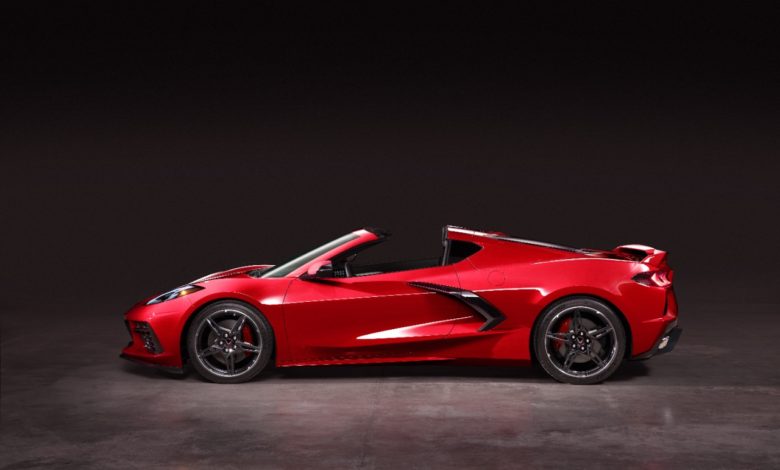 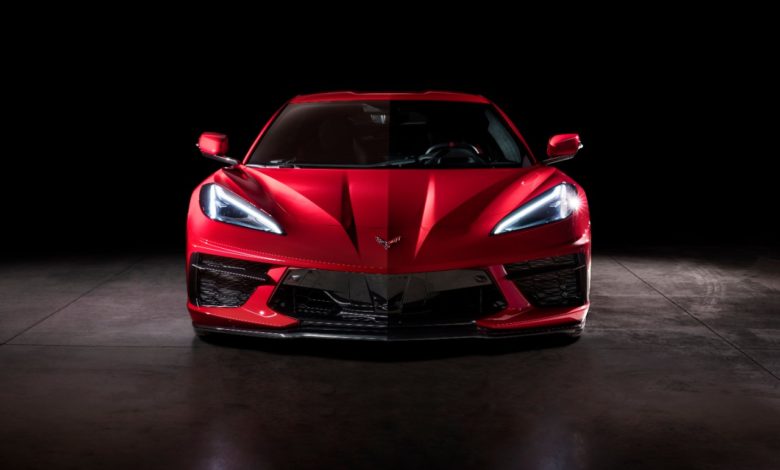 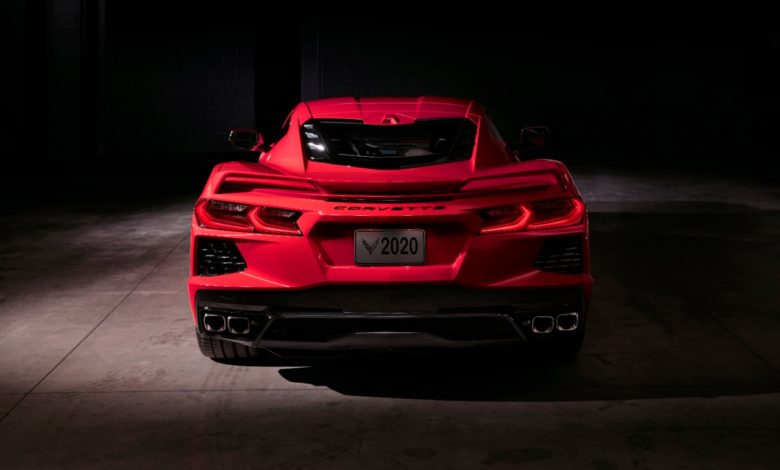 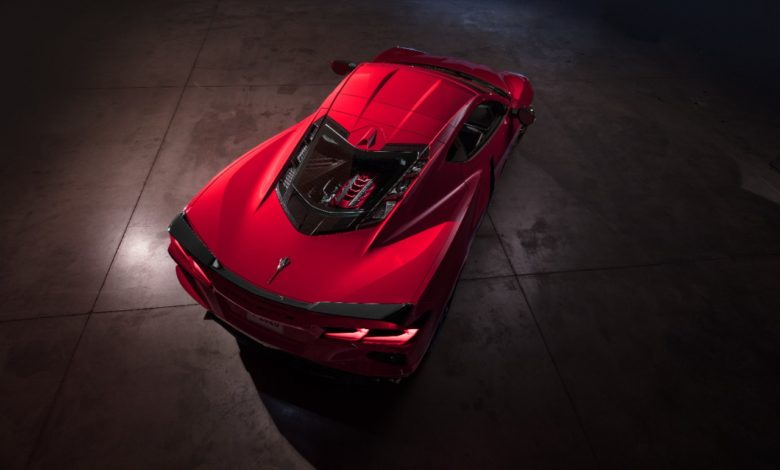 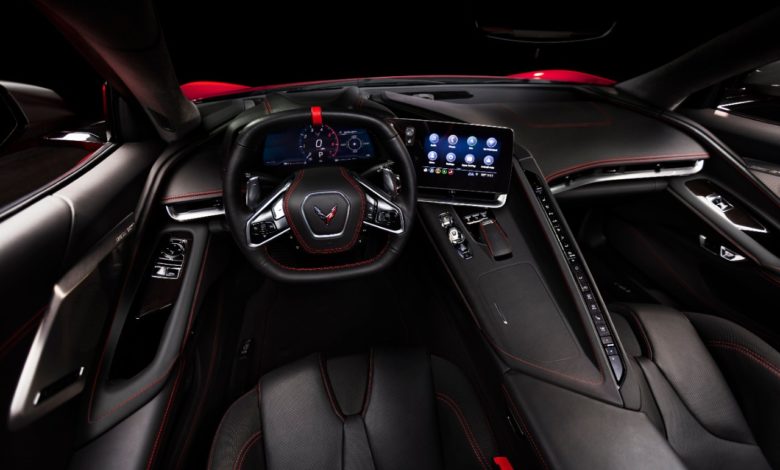 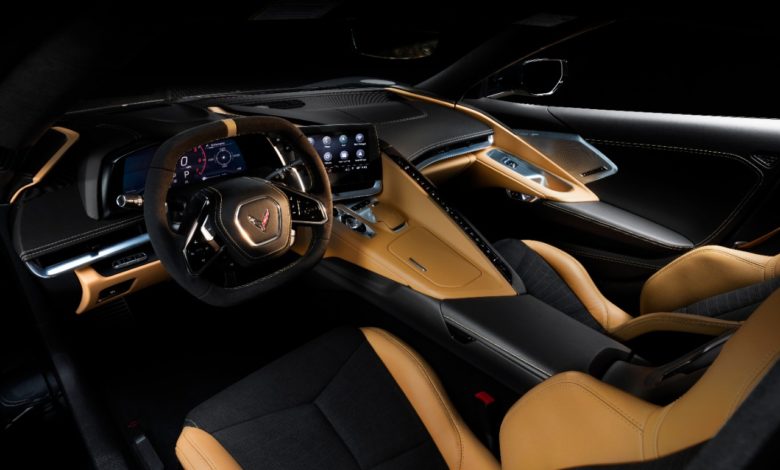 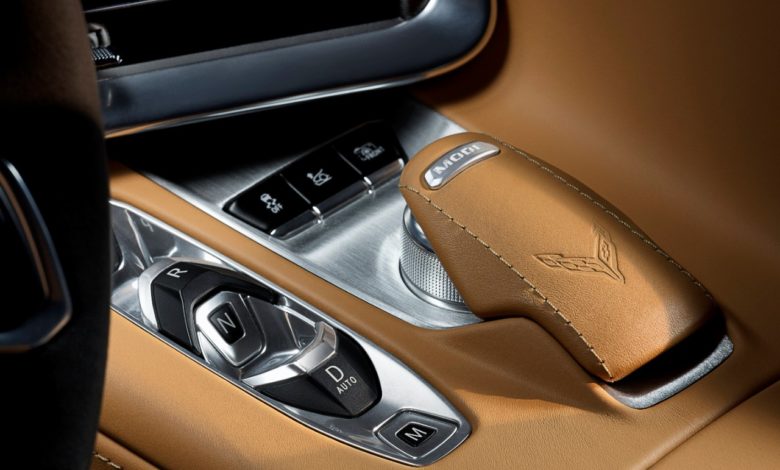 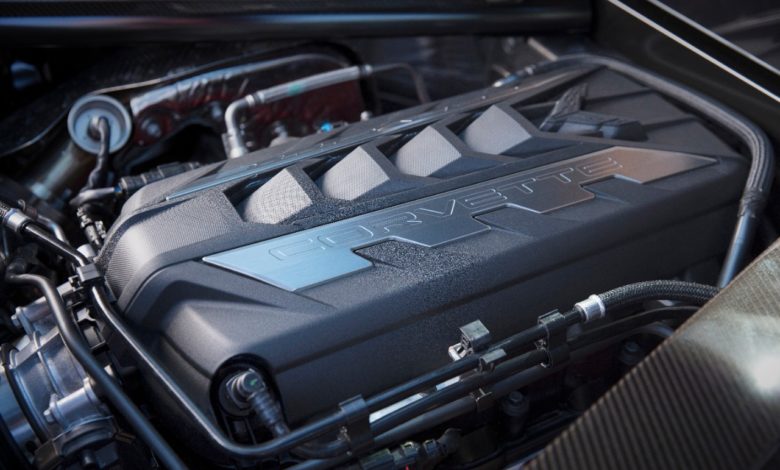 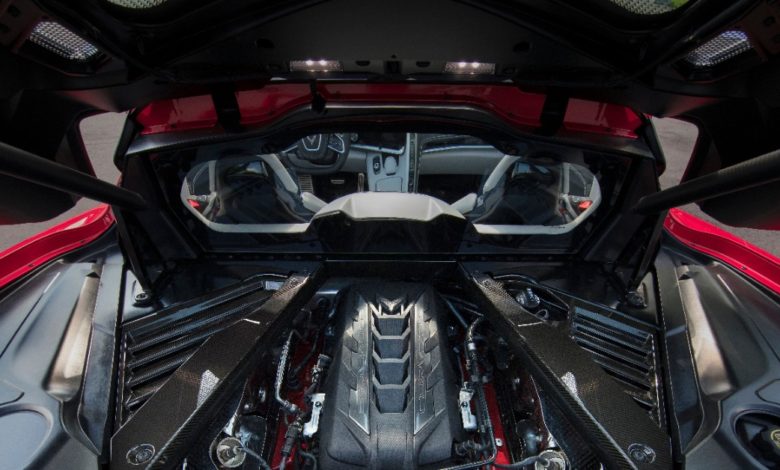 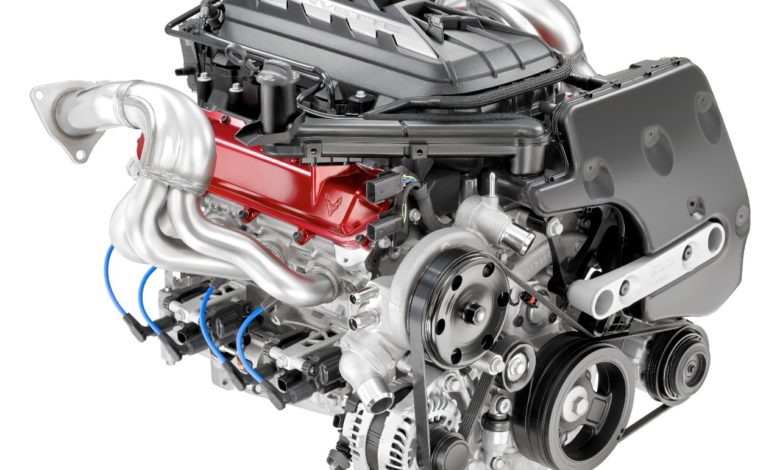 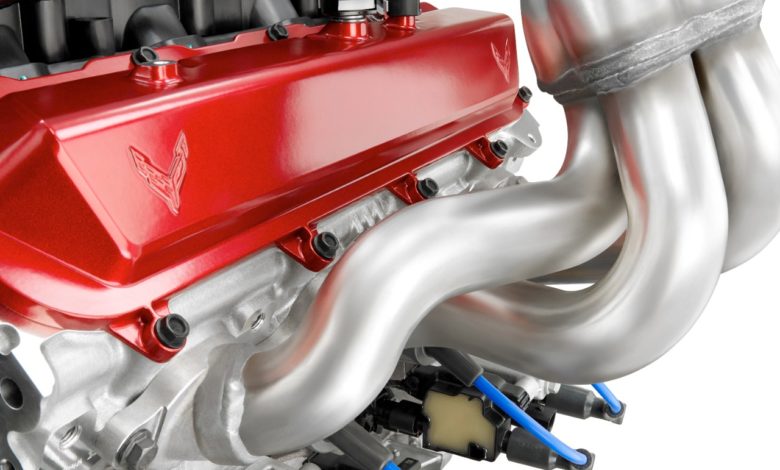 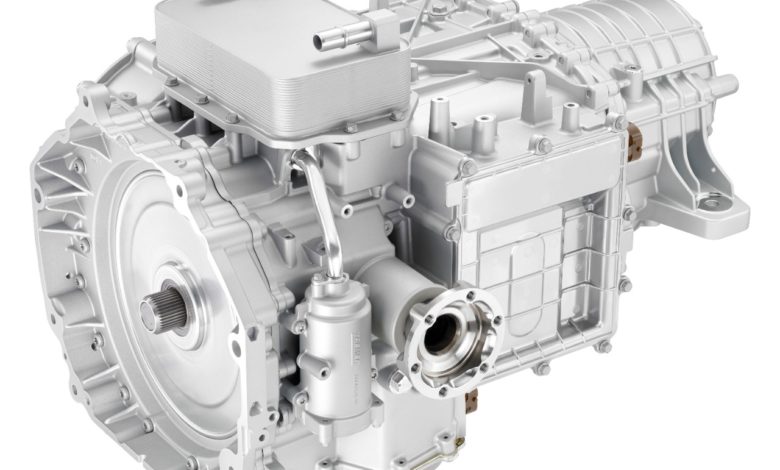 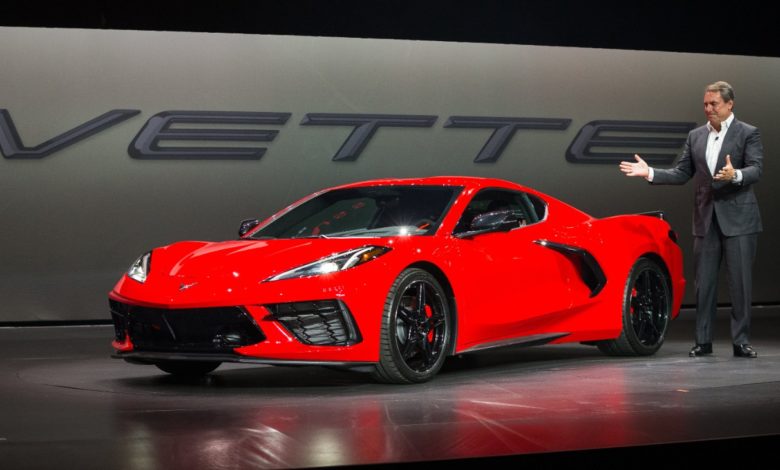 “The traditional front-engine vehicle reached its limits of performance, necessitating the new layout,” said GM President Mark Reuss. “In terms of comfort and fun, it still looks and feels like a Corvette, but drives better than any vehicle in Corvette history.”

The new mid-engine layout, according to Chevy, gives the 2020 Stingray:

The powertrain’s low position enables a low center of gravity for optimal handling, according to Chevy.

Perhaps the biggest update is found in the lubrication and ventilation system. For the first time ever, the base Stingray will use an engine-mounted dry sump oil system and three scavenge pumps for improved track performance.

During serious track driving, oil volume remains high to avoid diminished performance. The new Stingray’s lateral capability is greatly improved, so the LT2’s dry sump lubrication system had to be redesigned to provide exceptional engine performance even at lateral acceleration levels exceeding 1G in all directions.

A lightweight, 3.2mm-thick glass panel on the rear hatch allows owners to show off the engine. This panel features a cantilevered trailing edge to evacuate heat from the LT2 engine compartment.

Other notable engine characteristics include:

The next-generation LT2 is paired with Chevrolet’s first eight speed dual-clutch transmission, which provides lightning-fast shifts and excellent power transfer. This transmission is uniquely designed with TREMEC to provide the best of both worlds: the spirited, direct connected feeling of a manual and the premium driving comfort of an automatic, according to Chevy. The double-paddle de-clutch feature even allows the driver to disconnect the clutch by holding both paddles for more manual control.

The new small block V-8 has a torque curve optimized to take advantage of the bespoke DCT’s lightning-fast shifts. Engineers set the DCT up with a very low first gear to leverage the additional traction to get the car off the line quickly, and its close-ratio gears two through six keep the engine near the power peak on track. Tall seventh and eighth gears make for easy long-distance cruising with low mechanical stress and excellent fuel economy.

The DCT is mated to a new Electronic Transmission Range Selector. With this electric shifter there’s no mechanical interface between the shift lever and the transmission, according to Chevy. The Corvette’s electric shifter incorporates two pull toggles for Reverse and Drive and push buttons for Park, Neutral and Low/Manual. The shifter has been designed to be more attractive and compact than a standard shifter.

Corvette’s structure is built around its backbone: the center tunnel. This enables a light, stiff structure to serve as the foundation for the suspension system to perform in an optimized manner, according to Chevy. The car has a solid, connected-to-the-road feel with minimal vibrations at high speeds or on long road trips.

The tunnel-dominant approach offers many advantages, according to Chevy, including:

The all-new Corvette Stingray is built with a mixed-materials strategy, enabling key features such as:

The Stingray is designed for superior ride comfort on the highway and well-balanced handling on the track. It features coil over dampers that create entirely new ride and handling characteristics. The mid-engine architecture allows for a short, straight and stiff steering system, coupled with an updated electronic steering system, making the driver’s chassis input instantaneous, according to Chevy.

The new seating position places the car’s center of gravity close to the driver’s inside hip, so the car literally turns around the driver. It completely changes the perception of vehicle handling and responsiveness.

Other ride and handling upgrades, according to Chevy, include:

The 2020 Stingray’s exterior has a bold, futuristic expression with mid-engine exotic proportions, but it is still unmistakably Corvette; it’s lean and muscular, with an athletic sculptural shape conveying a sense of motion and power from every angle, according to Chevy.

The new location of the engine is truly the focal point for the car’s design. It’s the heart of this next generation Corvette and it sits like a jewel in a showcase, visible through the large rear hatch window. The added attention to detail optimized the appearance of every wire, tube, bolt and fastener, similar to those found in modern track and all-road motorcycle design, according to Chevy.

Some additional design touchpoints, according to Chevy, include:

True to its aeronautical and racing roots, the 2020 Stingray’s canopy-forward stance was inspired by F22s, F35s and other modern fighter jets and Formula 1 racing, according to Chevy. Other classic Corvette signatures adapted to the Stingray include a distinctive face that communicates the purpose of the vehicle’s mission, a classic horizontal crease, aggressive front fenders and familiar positioning of the dual-element headlamps.

The interior is further enhanced, according to Chevy, by:

Customers can create their own design statement, with the most personalization options ever for Corvette:

The Three seat options include:

Meanwhile, the Z51 Performance Package introduces a host of new technologies to the 2020 Stingray, including:

Driver mode choices have been expanded from four to six, allowing drivers to tweak the feel of their Corvettes to their personal preference. The familiar Weather, Tour, Sport and Track modes remain, and there are two new modes:

The 2020 Stingray benefits from GM’s new digital vehicle platform, an all-new electronic architecture that enables the adoption of the company’s next generation of technologies, according to Chevrolet. The architecture minimizes wiring while allowing for faster signal transmission between different vehicle systems and the higher resolution screens. The platform enables continuous vehicle improvements through over-the-air updates and enhanced cybersecurity measures.

Other new technology features, according to Chevrolet, include:

The entry 2020 Chevrolet Corvette Stingray will start under $60,000, according to Chevy. The car goes into production at GM’s Bowling Green Assembly in late 2019. Additional pricing and packaging information will be shared closer to launch.