“It’s hard to explain the craze today, but Hot Wheels was huge. All of my friends were saving up to buy all the Hot Wheels they could,” he said. Hot Wheels soon became the number one toy for boys, and Pascal spent his childhood racing and collecting the die-cast cars.

When he grew up, Pascal put his Hot Wheels in a cigar box at his mother’s house, where they collected dust for almost 30 years. His passion for classic cars continued into adulthood, but his Hot Wheels collection remained out-of-sight until he rediscovered it in 1999.

“That excited feeling I had as a boy was rekindled instantly,” said Pascal. “My friend offered to pay me $200 for the cigar box. I declined and held onto them, but it was his offer that made me start researching the value of Hot Wheels and pursuing collecting as an adult.”

Pascal began searching for Hot Wheels everywhere. He called other collectors, took out newspaper ads and even used a 1969 telephone book of Mattel employees to see if any former workers had rare toys they would be willing to part with for a price. He collected everything he could, including Hot Wheels memorabilia like blueprints, original drawings, sales brochures and wood models.

His collection of Hot Wheels models was growing by the thousands, but Pascal was still not satisfied. Why? He had his eye on the most valuable Volkswagen ever produced — the pink Volkswagen Beach Bomb prototype.

When Volkswagen and Hot Wheels first collaborated to make the model, it had a narrow body and surf boards hanging out of the back window. It was unable to stay upright when it rolled, so Hot Wheels redesigned the model, making the sides more weighted and moving the surfboards to the sides of the vehicle. 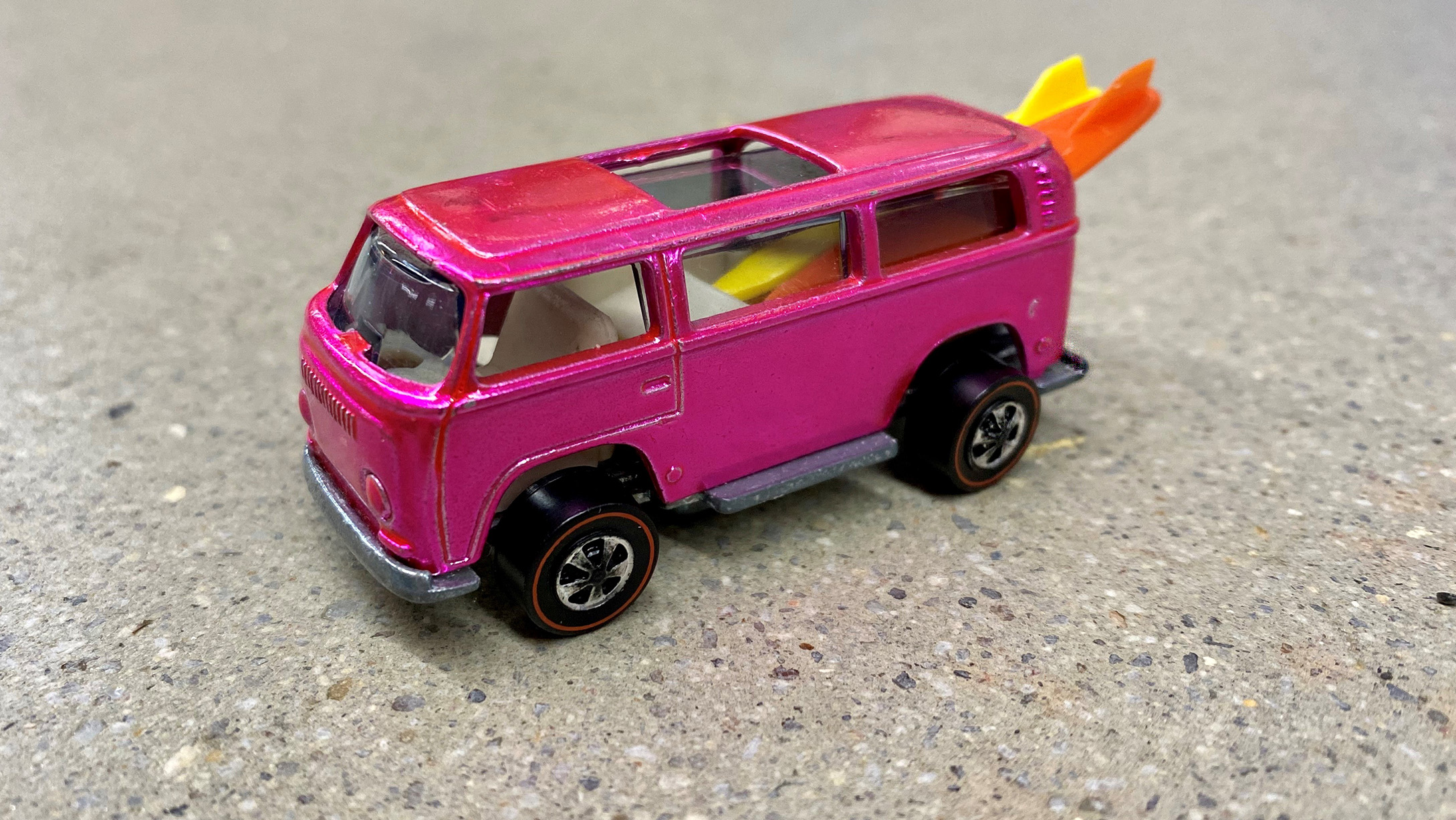 These redesigned models made it to production and were sold with a sticker sheet of flowers to decorate the vehicle, epitomizing the 1970s “flower power” era. However, it’s the original prototypes with the surfboards out the back window that are extremely rare, as only Hot Wheels employees had access to them.

The pink Beach Bomb prototypes are the rarest of all these models.

“I already had heard about [the Beach Bomb] in purple, green, red, light blue and gold. I even had heard about an unpainted model,” said Pascal. “But pink was extremely hard to find. Most Hot Wheels models were marketed to young boys, who the brand assumed didn’t want to play with pink. They created just a few pink [Beach Bomb] models to market to their female audience.”

There are only two known pink Volkswagen Beach Bomb prototypes in existence. When Pascal learned that these were the most sought-after Hot Wheels in the world, he began his research. He tracked down the owners, made his offers and eventually acquired both pink Beach Bomb models. He has since sold one of them to another friend and collector, but the one that is in the best condition has stayed with him.

Today, Pascal owns over 4,000 Hot Wheels models and about 3,000 pieces of memorabilia, but the pink Volkswagen Beach Bomb remains his most prized possession.

“I won’t say how much I purchased it for,” said Pascal, “but it is worth an estimated $150,000 today.” This is well over the cost of most new luxury vehicles — and more than 50 times the cost of the model that made it to stores — but for Pascal, the 1:64 scale Hot Wheels car was well worth it. “This model was a huge win for my collection,” he said.

To help prevent sun damage, the Beach Bomb remains in a dark, Plexiglass case. Pascal displays the model in his personal museum in Maryland, where he gives private tours to other Hot Wheels enthusiasts. He has also loaned the model out to other automotive museums and events for display.

“I want other people to experience the Beach Bomb. I’ve found so much joy in learning about classic cars and Hot Wheels, and I hope I can spark some of that in other people. It’s a treasure to find these rare models,” Pascal said.