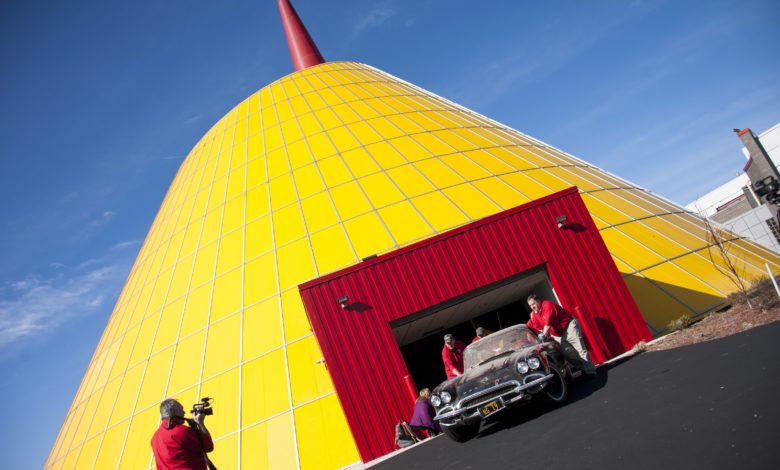 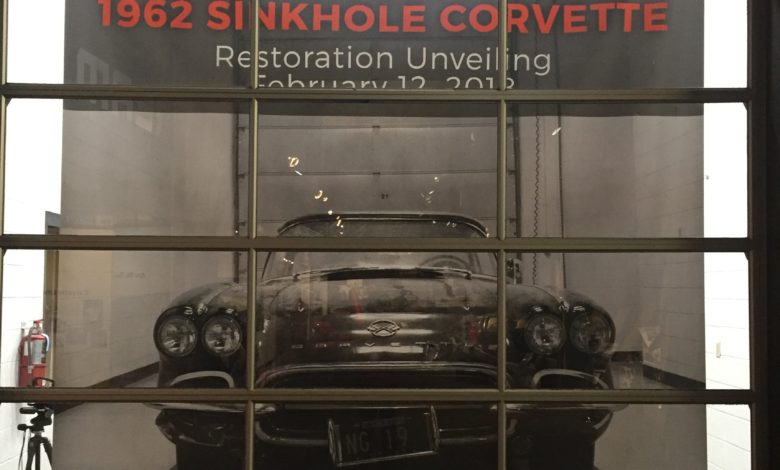 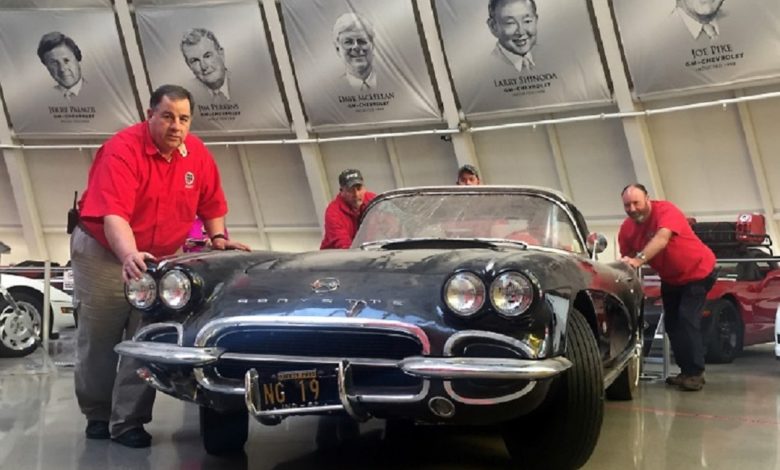 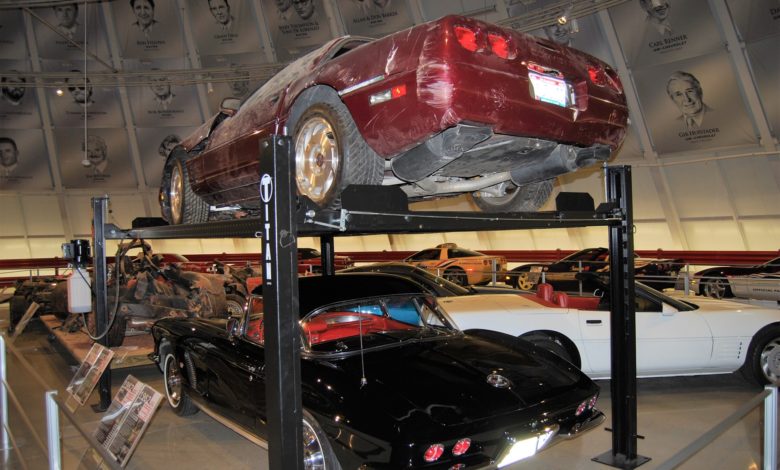 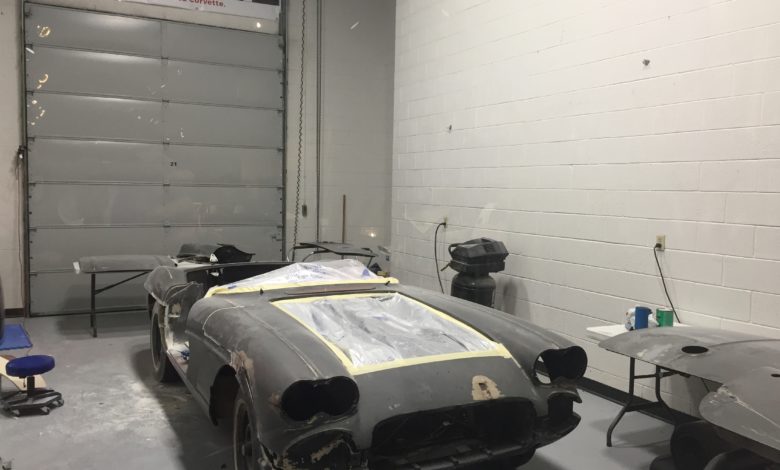 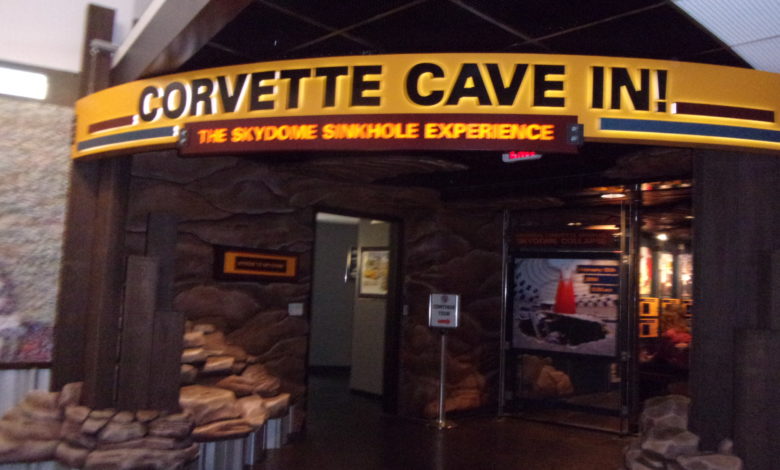 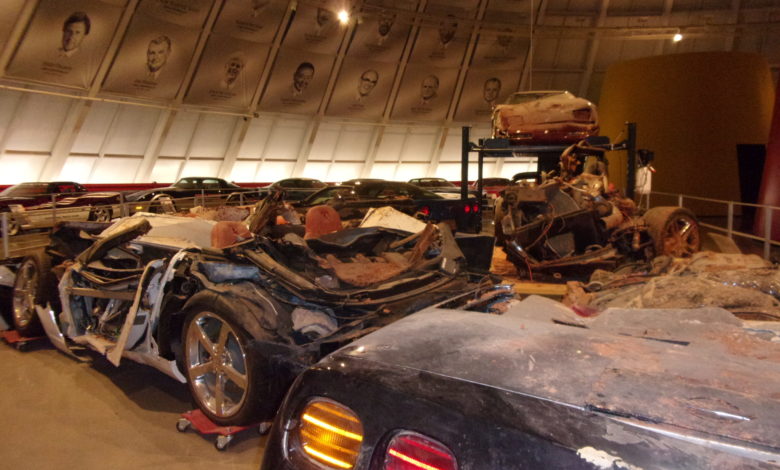 The National Corvette Museum completed the restoration of a high-flying 1962 Corvette in a garage bay near the museum’s AutoZone Maintenance Shop. Most of the work was done in public view.

The Auto Zone Maintenance Shop is where cars are prepped for Corvette buyers who purchase Chevrolet’s Corvette Museum delivery option. The Corvette factory is located close to museum in Bowling Green, Kentucky.

The black 1962 Corvette went high-flying through the air when the floor under the museum’s Skydome-where the car had been on display-collapsed due to a sinkhole that opened beneath it. The ’62 ‘Vette and seven other Corvettes fell about 30 feet, landing on top of each other.

And the whole thing was filmed by security cameras.

The damage suffered by each of the cars varied. After they were removed from the sinkhole, it was clear that some could be repaired and some probably could not. The ’62 Corvette was the last one to be restored. Strangely enough, with the sinkhole disaster making the national news, more people learned about NCM and attendance went up.

After being removed from the sinkhole, the ’62 was displayed in ‘as-is’ condition for nearly three years. Then, the museum decided to commemorate the third anniversary of the sinkhole by starting its restoration. Almost all the work on the car was performed in-house by NCM Vehicle Maintenance and Preservation Coordinator Daniel Decker, NCM Curator Derek Moore, staff member Dan Garrett and other helpers.

The car needed about $15,000 worth of new parts, including a complete front-end assembly, hood panel and windshield, but its damage was minor compared to the other cars. General Motors wound up covering all $25,000 of restoration expenses.

The car, still covered in dirt and debris from the sinkhole, was taken off display on Feb. 9, 2017, in the Skydome and transferred to the restoration shop. NCM used Facebook and YouTube to post video updates and progress reports about the restoration. People could look through a glass garage door to see the work being done or they could follow the work on the museum’s Facebook and YouTube pages. or the NCM Website.

By November 2017, all of the paint had been stripped and Decker started trimming the broken front fender for rebonding and fiberglassing. Scratches on the driver’s side door, the hood and the trunk lid had all been repaired. The restoration team received a new rear quarter panel section, removed the old one and got the new portion fitted.

The new and old sections came together before visitors’ eyes on Nov.  3, 2017. From that stage, work continued on the car pretty much every weekday until the work was complete. Museum visitors could observe the worker in action each day until 3 p.m. The more extensive type of work, such as primer coating the body, was done on Fridays.

By February 2018, the restored 1962 was placed back in its original pre-sinkhole display space in the Skydome and revealed to the public. While the car was worked on for almost a year, the total time to perform the restoration took about four months of solid work. In 2019, working with a company called LifeLike Imageworks, NCM launched a free 360-degree interactive tour of the south side of the cave created by the sinkhole on its Website. The tour allows virtual visitors to explore nearly every inch of the cave.

The 360-degree tour is free and can be found on the museum’s website by clicking on the Explore-Exhibits menu, then selecting the Corvette Cave-In link.

“The sinkhole story is one that continues to captivate our visitors, and anyone who stumbles upon our security footage of the collapse online,” added Katie Ellison, NCM communications and marketing director. “It’s a part of not only museum history, but Corvette history. We encourage visitors to check our immersive displays out and learn the story firsthand.”