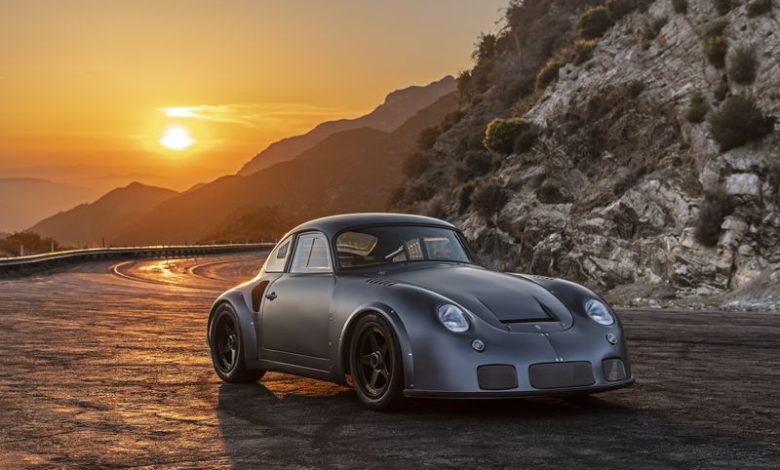 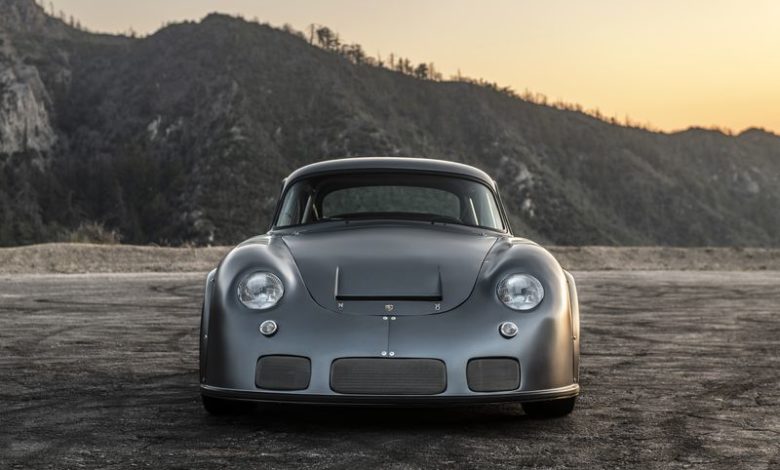 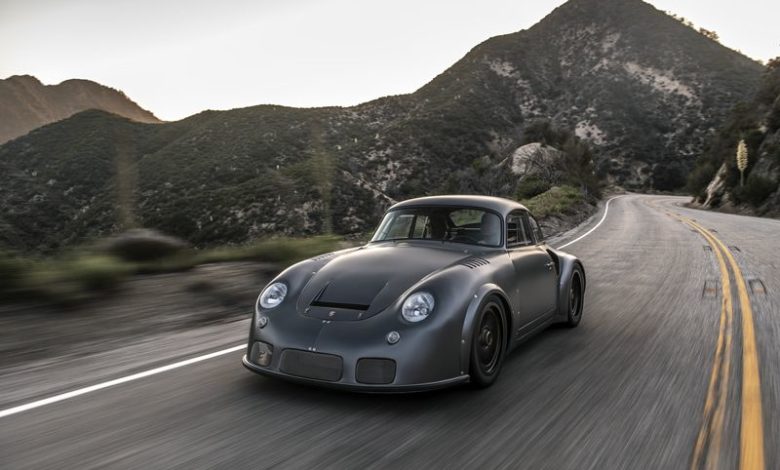 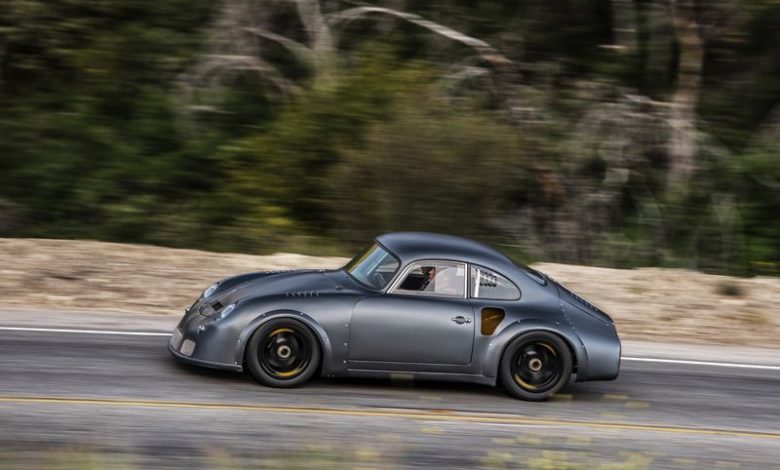 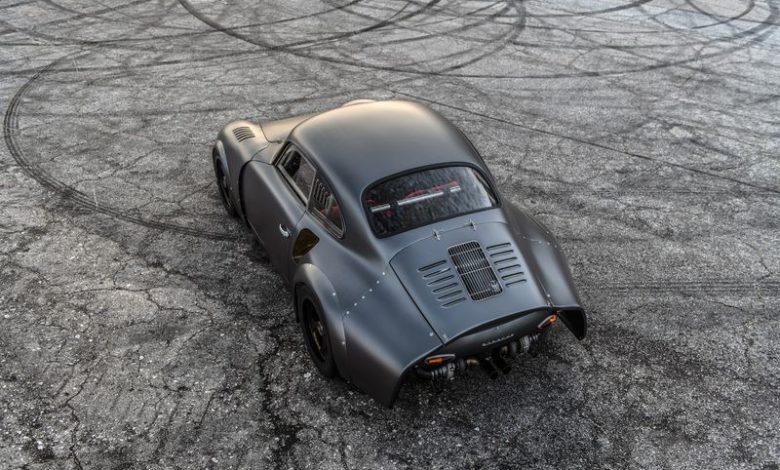 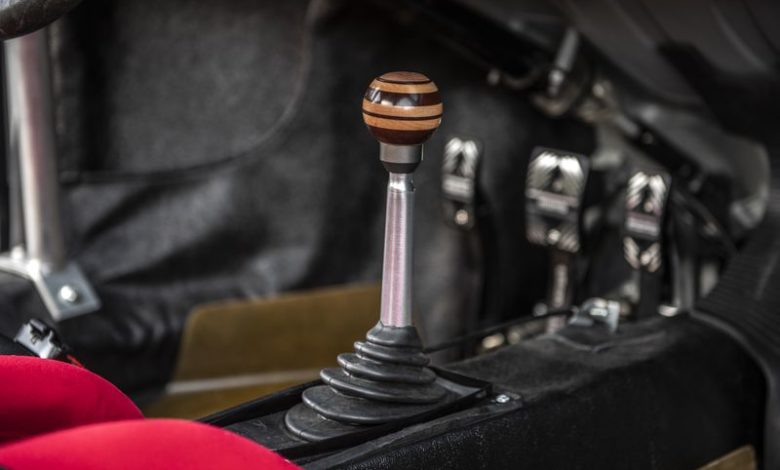 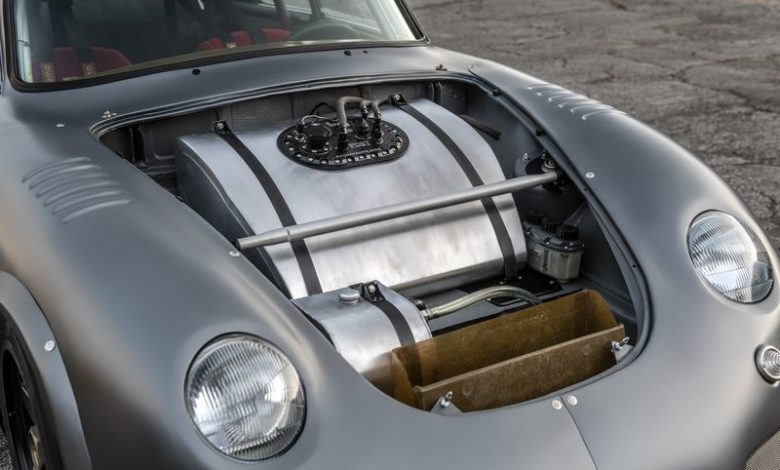 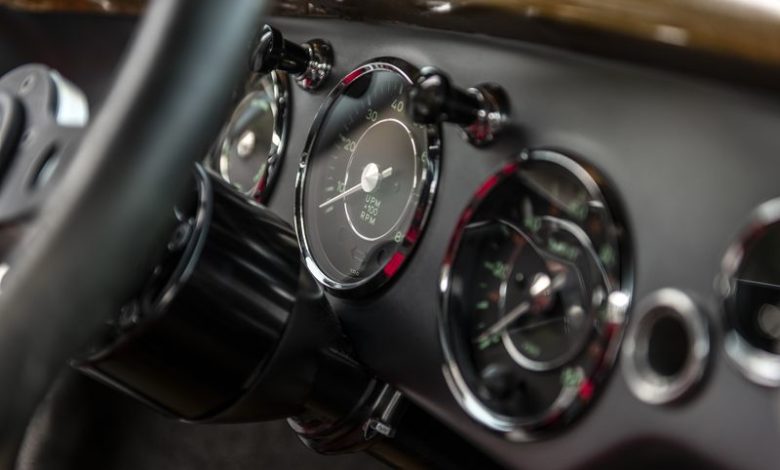 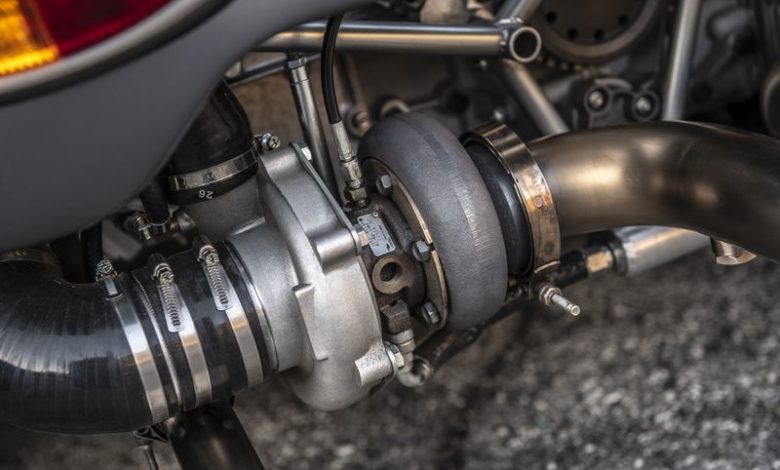 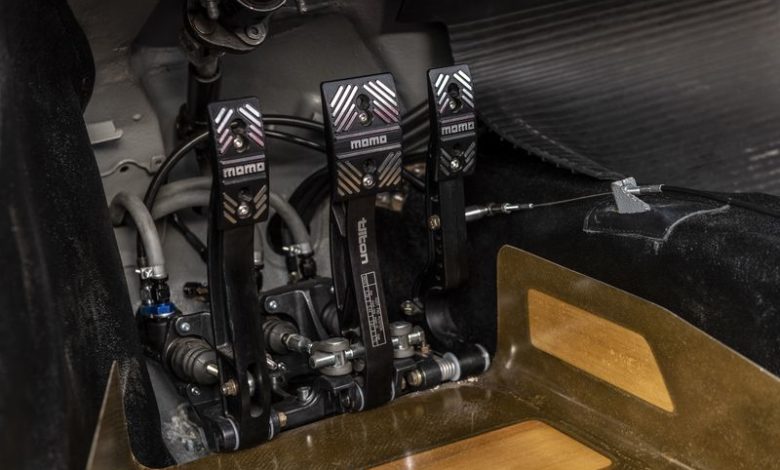 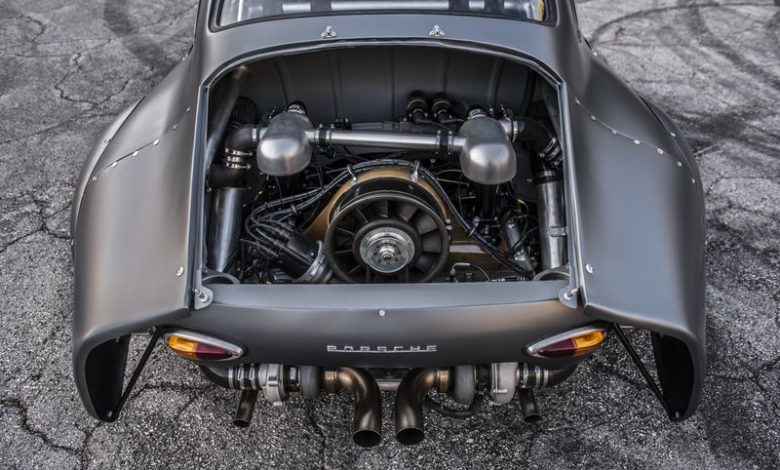 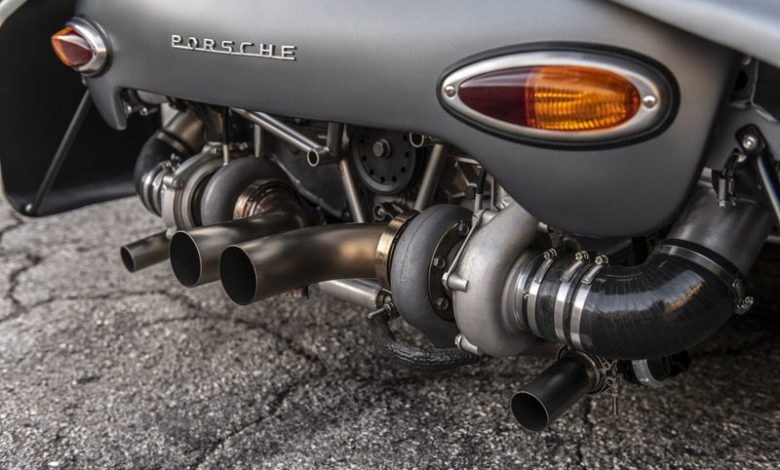 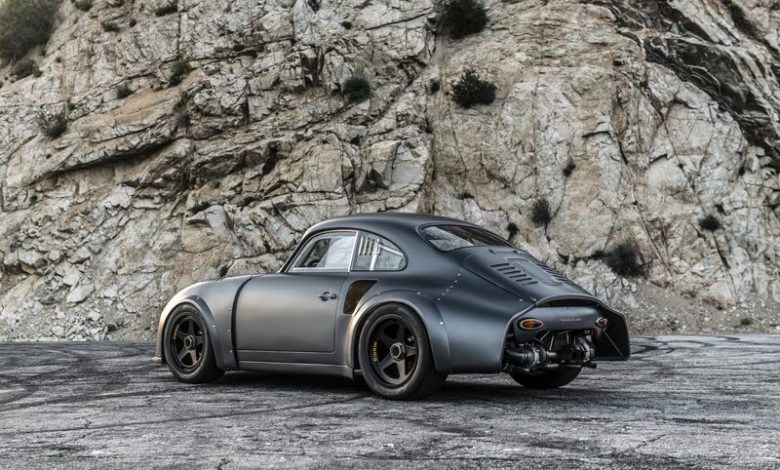 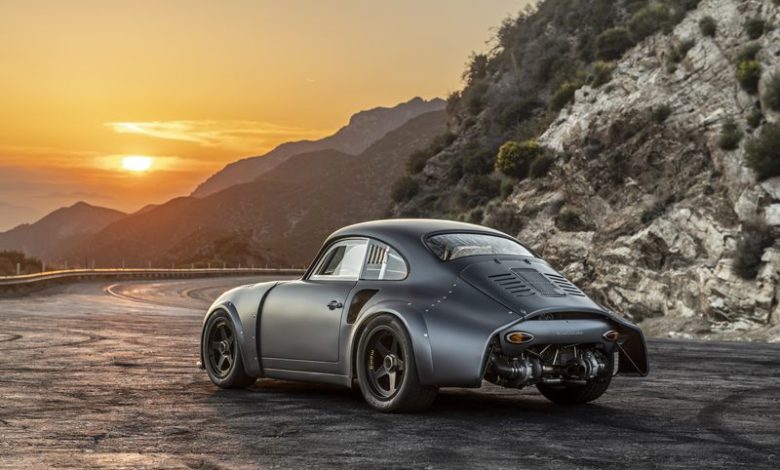 Car enthusiasts who hear Batmobile and German car in the same sentence typically think of the BMW 3.0 CSL. Emory Motorsports’ latest creation hopes to update that association to Darth Vader and Porsche 356.

“It started back in 2012 when I had my friend Greg Macey sketch a concept I had had in mind for quite some time,” Emory said. “The idea was to create an homage to the Porsche works 935 cars of the 1970s while retaining our Emory 356 Outlaw styling. Greg did phenomenal sketches, which we posted on Instagram. MOMO CEO Henrique Cisneros reached out and asked what it would take to turn the concept into reality. Once we zeroed in on the details, we had a second rendering done by Avedis Djinguelian to serve as a more representative style guide to the finished product. The actual build time was about four full years.”

As with other Emory Outlaw and Emory Special builds, the project began with the perfect donor car: a 1960 356B T5 coupe with an undamaged roof, but body panels destined for scrap.

With fresh experience combining a 356 body and 911 chassis in the world’s first AWD 356—the Emory/Independent Fabrication 356C4S project—Rod’s crew knew where to nip/tuck to combine the best of the two Porsche sportscar iterations, some 35 years apart in age. The result is a seamless super-performance concoction with a 356 silhouette artfully preserved, thanks to its factory greenhouse and doors.

All of the car’s now-removable nose and tail bodywork is hand-formed aluminum, as is the aluminum deck lid with custom stainless hinges and the one-piece aluminum bonnet with oil-cooler air outlet. To relieve wheel-well air pressure, Emory Motorsports added louvers and front fender stand-offs.

Other custom air-management modifications include stainless mesh grilles for the cooling ducts and intercooler air inlets in the steel section of the rear fenders. Final exterior touches are modified Porsche 911 rocker panels and Plexiglas side and quarter windows. The body color is a custom blend of PPG hues that Rod Emory calls Meteorite Matte Metallic.

To merge the Porsche unibodies, the difference in wheelbase was essentially split (3.35 inches) with a clever redistribution of the length. However, all of the stock 964 suspension pick-up points were retained. Also, the engine frame section was tailored to a length appropriate for a 356-correct air-cooled four.

The exotic Emory-Rothsport twin-turbo Outlaw-4 engine produced a whopping 393 horsepower on Rothsport Racing’s engine dyno—incredible force for a car that weighs 1,950 pounds. The proprietary engine block, developed by and only available in Emory Motorsports builds, is a collaboration between Emory and Jeff Gamroth of Rothsport Racing.

The Outlaw-4 engine’s architecture is based on the dry-sump Porsche 3.6L powerplant from the 1990s. To get the crazy power, Rothsport Racing created a purpose-built fuel-injection system with a one-off intake plenum and twin-plug distributor, managed by a Motec computer. The RSR race-inspired twin-turbo system uses two Garrett GT28R ball-bearing turbos with Turbosmart wastegates, backed by custom intercoolers. A dash-mounted 935-style boost control knob allows dialing up as much as 1.2 bar boost from the turbos.

The 356 RSR’s suspension was designed around the extreme power-to-weight ratio. Ride is controlled by KW coilovers with 1.5 inches of on-demand lift to negotiate driveway aprons. Eisenlohr Racing Products front camber plates and mono-ball mounts make for additional adjustability. Flatter cornering is made possible by Tarett Engineering swaybars. Also, the 964 non-power rack-and-pinion steering and brakes were retained, albeit with custom Coleman Racing rotors and hats.

Competition components were one of the project’s springboards, but street-legality was the goal. Emory has an affinity for the MOMO 5-spoke wheels with centerlock hubs from the Porsche works 935. One set of MOMO Heritage center-lock wheels were created just for this car; fronts are 17×7 and the rears are 17×8, wrapped in Pirelli P Zero Trofeo R tires.

The MOMO influence continues into the interior. Emory is a huge fan of the 911 RSR MOMO Prototipo steering wheel, and MOMO recently unveiled a distressed version for a historic effect, complete with a quick-release hub. The adjustable Tilton pedals feature custom MOMO billet pads. The shifter knob is also a Porsche 917-inspired MOMO unit atop a Rothsport Racing shifter. Seats are custom and are modeled after the 911 RSR. They are covered in fire-retardant Spanish Red Veltex fabric with custom-embroidered MOMO logos.

The 356 RSR has a few other cues that celebrate Porsche’s competition history. The amber fiberglass footboards and dash caps were inspired by the 917 and 935. The car’s marine-grade rubberized Hardura flooring is the same material used in Porsche GT cars. The floormat’s backing has sound-absorbing insulation.

“People had strong reactions when we debuted the 356 RSR at Luftgekühlt this past May,” Emory said. “It was too over-the-top even for some of the forgiving purists—something we’re used to after being branded Outlaws by the period-correct owners decades ago—but the car definitely attracted a lot of attention and now serves as a benchmark for what we can do with Porsche’s extremely flexible platforms.”