Following the Coupe and Cabriolet, the third body style of the new Porsche 911 generation is now making its debut with the all-wheel drive 911 Targa 4 and 911 Targa 4S models.

The fully automatic roof system remains its distinguishing feature, and just like the legendary original Targa model from 1965, features a characteristic Targa bar, a retractable roof section above the front seats and a wraparound rear window. The roof can be automatically opened and closed in just 19 seconds at the touch of a button.

Both models are fitted with an eight-speed dual-clutch transmission (PDK) and intelligent all-wheel drive Porsche Traction Management (PTM) as standard to deliver compelling performance, traction and driving pleasure. Alternatively, the 911 Targa 4S can be ordered with a seven-speed manual transmission at no charge, which includes the Sport Chrono package as standard.

Both 911 Targa models are powered by a six-cylinder, three-liter twin-turbo boxer engine. The 911 Targa 4 now delivers 379 hp and accelerates from zero to 60 mph in just 4.0 seconds when equipped with PDK and the optional Sport Chrono Package – one tenth quicker than the previous model. The engine in the 911 Targa 4S puts out 443 hp and reaches the 60-mph mark in just 3.4 seconds with PDK and the optional Sport Chrono Package – four tenths quicker than its predecessor. The top track speed of the new 911 Targa 4 is 179 mph, while the 4S peaks at 188 mph. 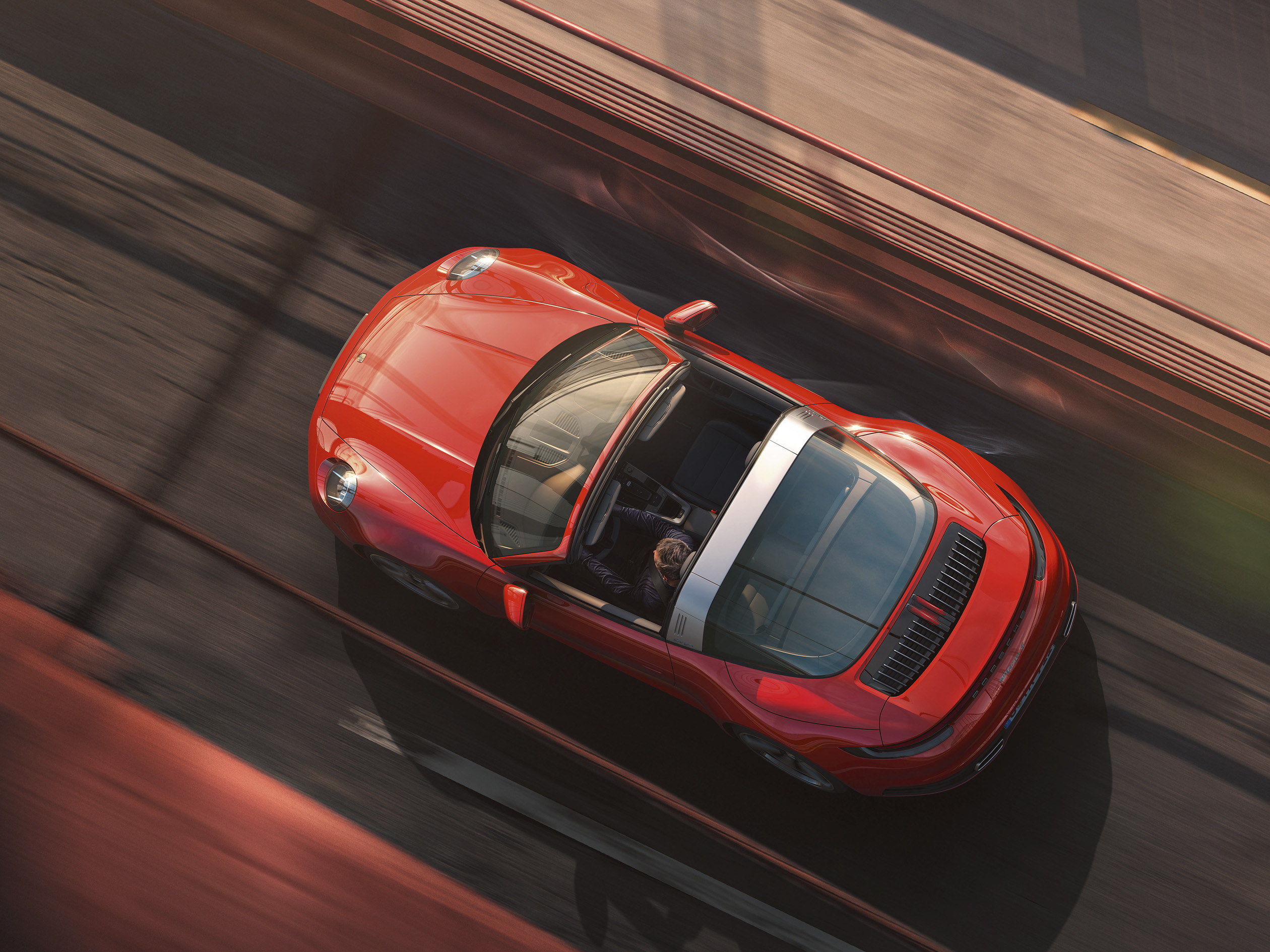 The enhanced performance of the new all-wheel drive models goes hand-in-hand with further development of the front-axle drive system that was already introduced in the 2020 911 Carrera 4 and 4S Coupe and Cabriolet models. The clutch and differential unit is water-cooled and has reinforced clutch discs for greater strength and a higher load capacity. The increased actuating torque at the clutch improves its adjustment accuracy and the function of the front-axle drive.

Like on all Porsche 911 Carrera models, the electronically-controlled variable damping Porsche Active Suspension Management (PASM) system is standard equipment on the new 911 Targa models. This system automatically adjusts the damping characteristics focused on maximizing driving comfort and handling to each driving situation and has two modes that can be activated by the touch of a button: Normal and Sport. Porsche Torque Vectoring Plus (PTV Plus), which includes an electronic rear limited slip differential with fully variable torque distribution, is standard for the Targa 4S with PDK and is available as an option on the Targa 4. When ordered with the manual transmission, the 911 Targa 4S comes fitted with a mechanical rear limited slip differential. Like the other eighth generation Porsche 911 variants, the Targa models are also equipped with Porsche Wet Mode as standard. 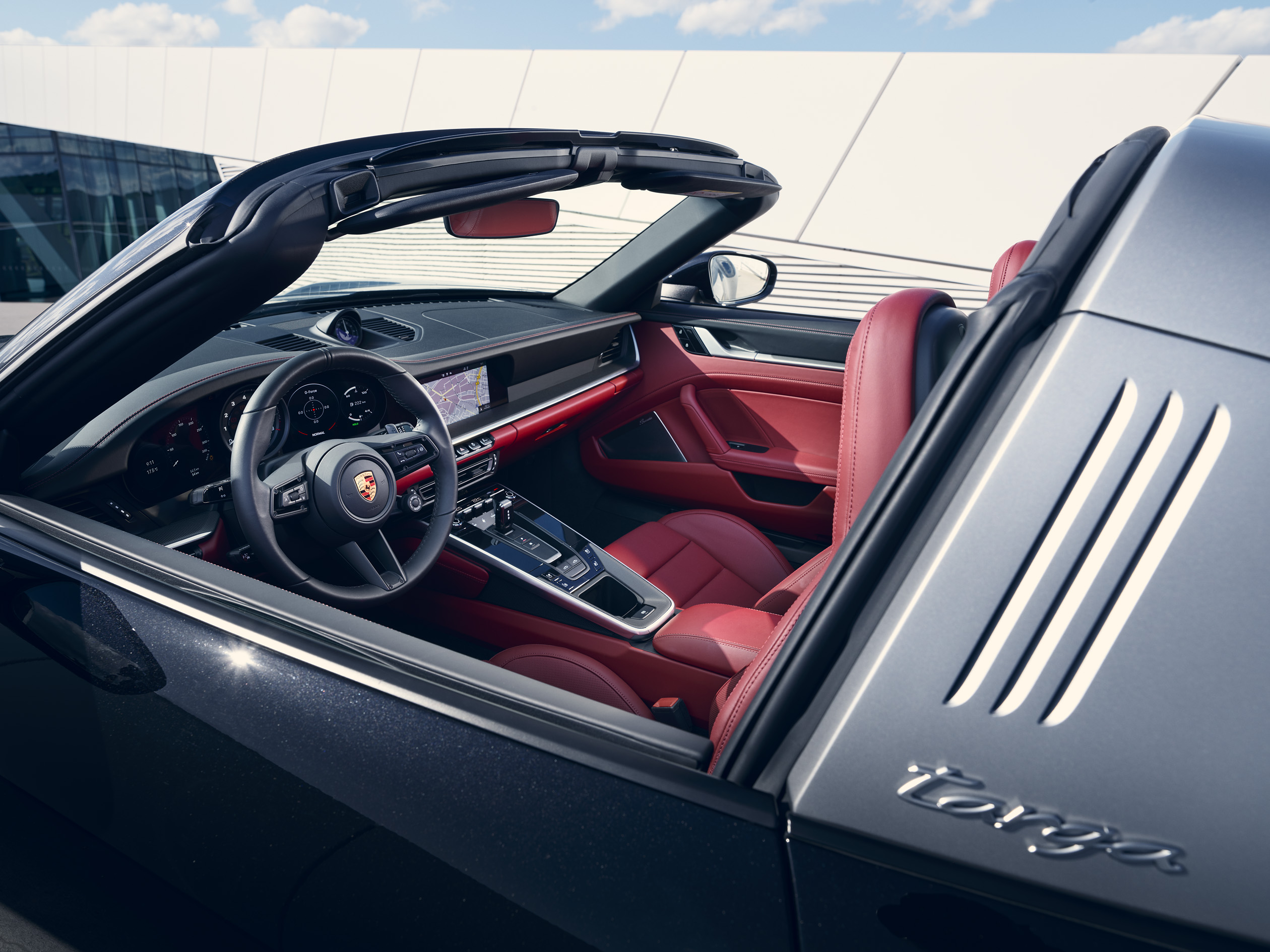 The most striking feature of the 911 Targa is, of course, its Targa bar and roof, which was adopted from the previous 991 generation model and optimized further. Harking back to classic Targa models of the 1960s and 1970s, the Targa bar comes standard in silver but can also be optionally ordered in black, and features the characteristic “Targa” model designation on each side. The roof construction consists of two flat magnesium elements, which hold the fabric roof in place securely and contribute to the elegant silhouette of the car. A heated glass rear window, sound-deadening material inside the fabric, as well as an extendable wind deflector integrated into the upper cowl frame of the windshield make the new 911 Targa comfortable and suitable for daily use.

The exterior of the 911 Targa is characterized by the design elements of its 992-model generation. Compared to its predecessors, its body features significantly more pronounced wheel housings at the front and, between its LED headlights, its front luggage compartment lid has a distinctive recess evoking the design of earlier 911 generations. The rear is characterized by a wider, variably extending rear spoiler and a seamlessly integrated and elegant light bar. With the exception of the front and rear fasciae, the entire outer skin is made from aluminum.

The interior echoes the 911 Carrera models and is characterized by the clear and straight lines of its dashboard and its recessed instruments. The 911 models from the 1970s provided the inspiration here. Alongside the central tachometer – very much a defining feature for Porsche – two thin, frameless freeform displays offer key vehicle information for the driver. Five toggle switches providing direct access to important vehicle functions are located below the 10.9-inch center screen of the Porsche Communication Management (PCM). The standard PCM features include online navigation as well as Connect Plus (a subscription is required after an initial 12-month trial period). 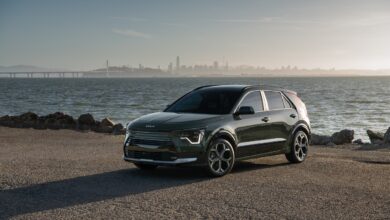