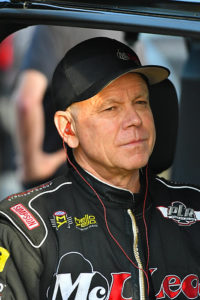 Paul Lee, a veteran racer and the owner of McLeod Racing Clutches, returned to NHRA competition in May in the Nitro Funny Car category two years after suffering a widow-maker heart attack. Primarily backed by McLeod Racing and in partnership with StraightLine Strategy Group (SSG), the McLeod Funny Car debuted at the NHRA Southern Nationals in Atlanta, where it qualified ninth and advanced to the second round of eliminations.

In late May, Lee raced in the Route 66 NHRA Nationals in Elwood, Illinois, where he qualified seventh but went out in the first round because of tire smoke down track. While McLeod Racing is still working to claim a win this summer, Lee’s return to the track is already considered a victory.

“It feels awesome to return to my passion of driving a Nitro Funny Car,” Lee said. “It’s all I’ve ever wanted to do, besides owning my business, McLeod Racing. My happy place is at the racetrack. It’s my home away from home.”

After six months of training to ensure he was back to both the physical and mental condition it takes to compete, Lee was thrilled to return to racing-”but being in the driver’s seat isn’t the only thing he is stoked about.

“I look forward to every race we attend not only for the competition, which I love, but also to see all my friends in racing,” he said. “NHRA drag racing is a family and a traveling circus but most of my real longtime friends I met at the track somewhere in the last 35 years of doing this.”

McLeod Racing’s partnership with SSG, a marketing alliance with Clay Millican, Steve Cole, Scott Gardner, Doug Stringer and JJ Koehler, is another development Lee is excited about. The team plans to race eight to 10 NHRA events with SSG in 2019 and also hopes to secure funding to participate in the entire 2020 NHRA schedule.

“That’s our goal,” Lee said. “So far it’s worked out great. We are all like-minded and are like one big racing family. I love being a part of SSG.”

In addition to acquiring funding and finding the right partners for the team’s business model, Lee said maintaining a healthy routine is also a challenge.

“Keeping up with the physical fitness is important to me, especially since my heart attack two years ago, so I try to exercise four to five days a week,” he said.

Something else the industry can look forward to from Lee: new developments from McLeod Racing Clutches within the next 30 to 45 days. The company is expanding into new aftermarket and racing segments of the driveline industry, he said.

Lee calls his comeback the Friends and Family Tour.

“Drag racing and driving a Nitro Funny Car is what I’ve always dreamed of doing since the first time I saw Jungle Jim Liberman at Atco Dragway near my hometown in New Jersey,” he said. “I was 13 at the time but remember it like it was yesterday, so I just stuck with it and here I am many years later living my dream.”