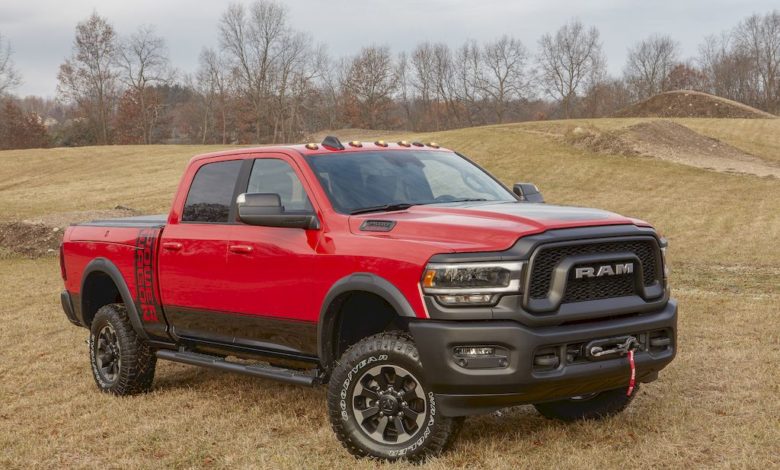 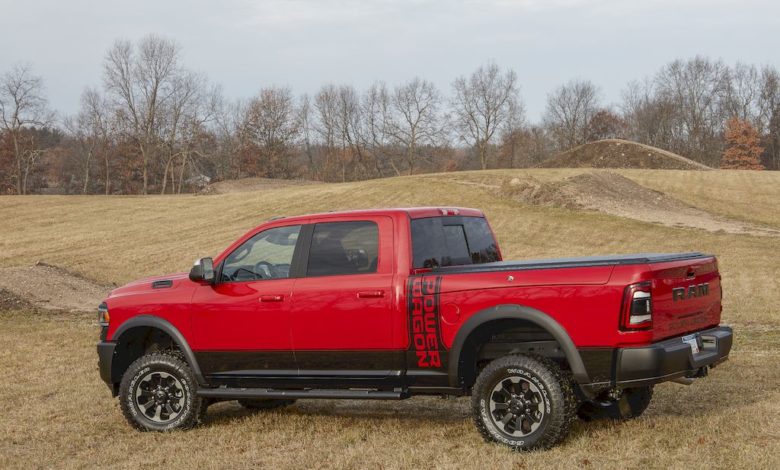 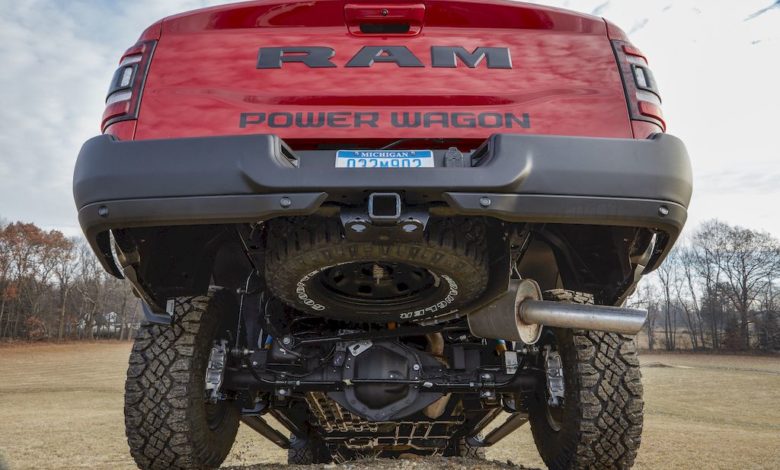 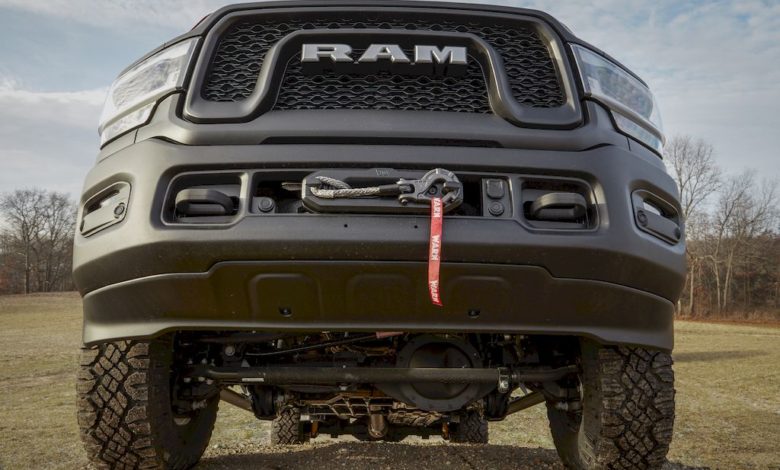 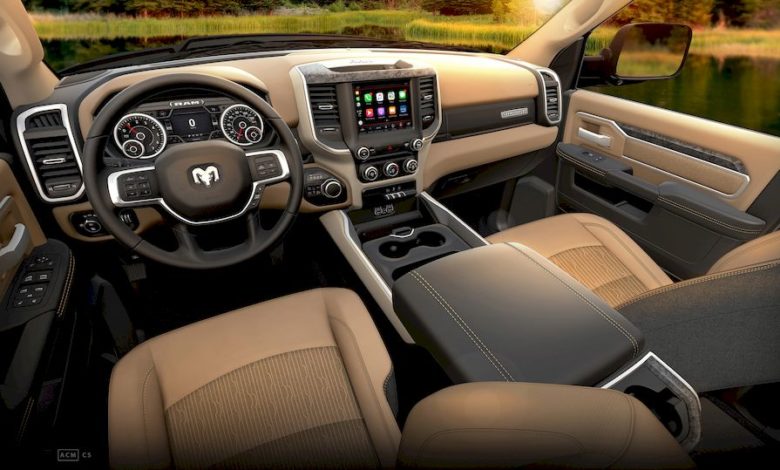 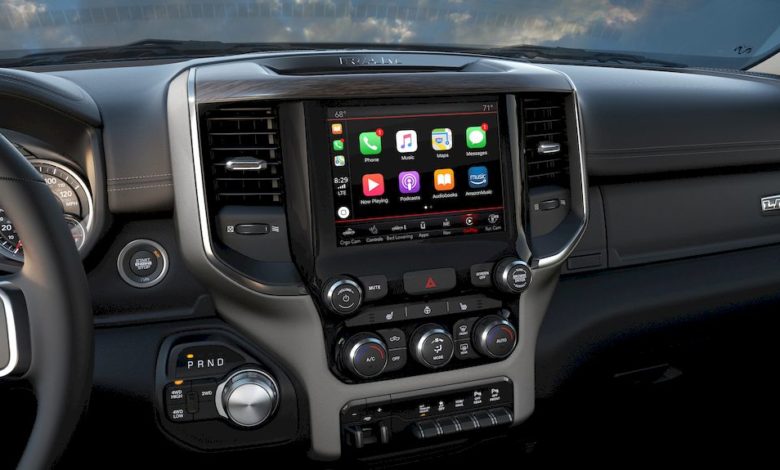 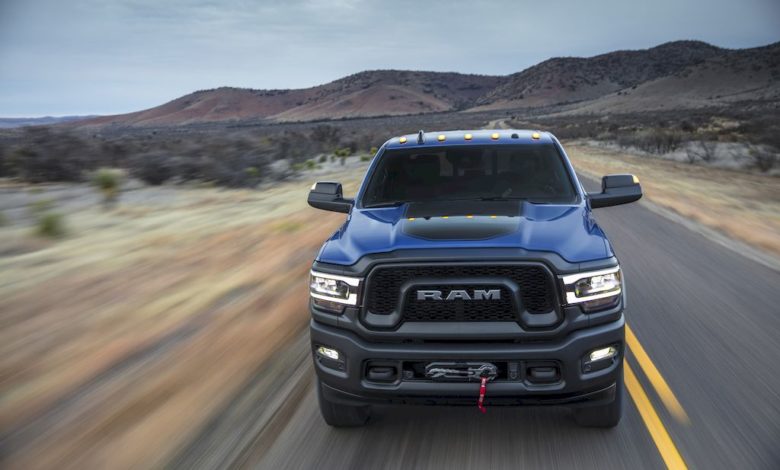 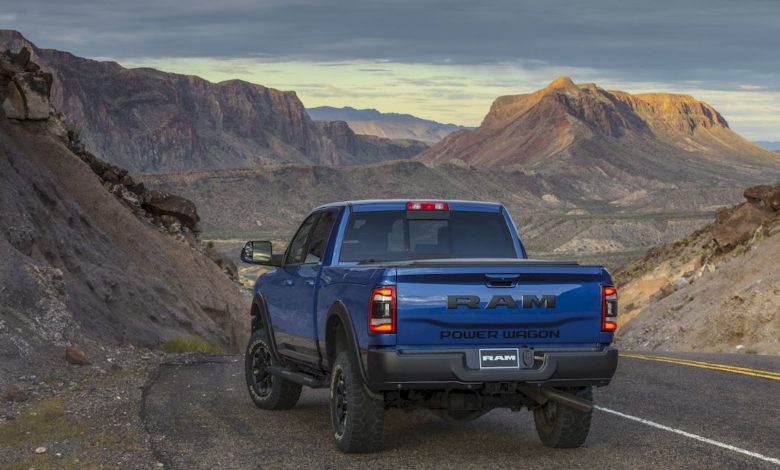 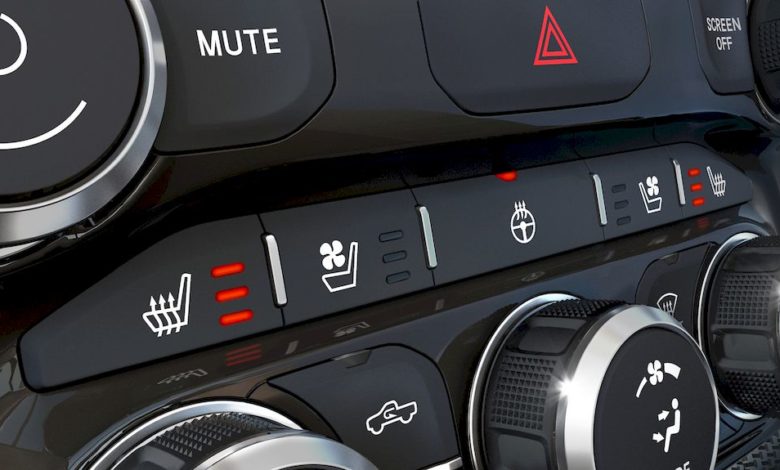 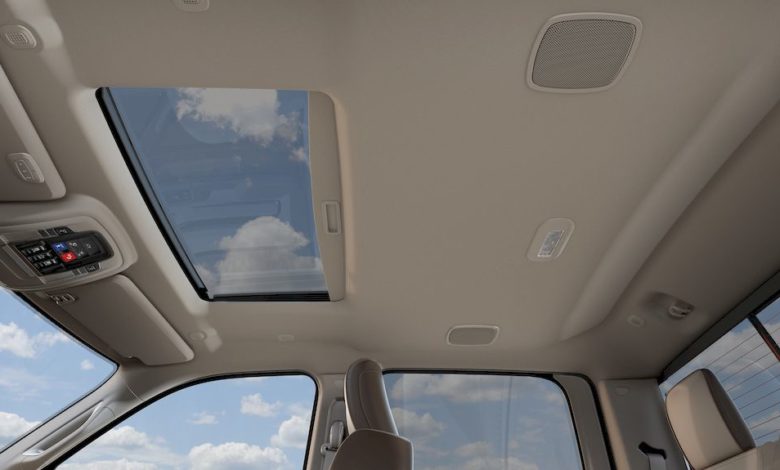 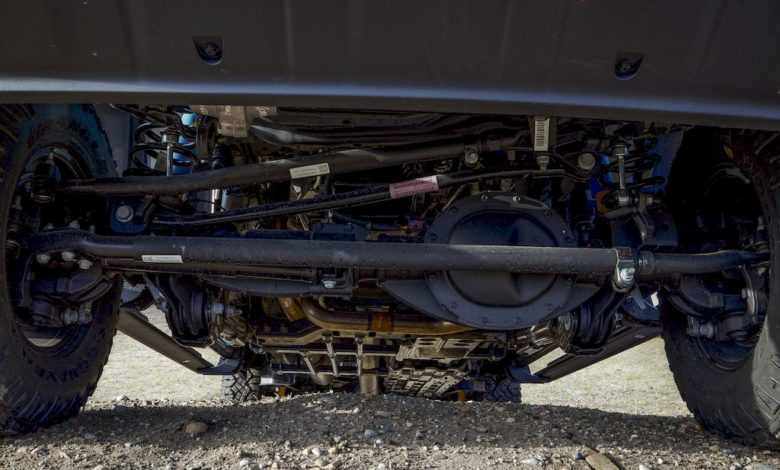 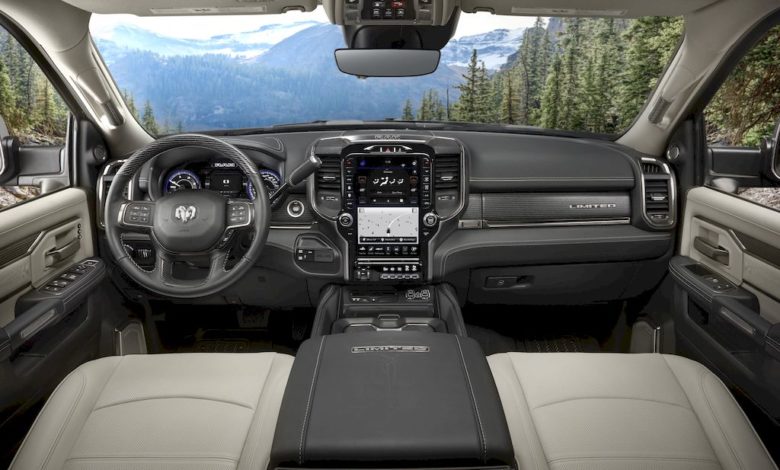 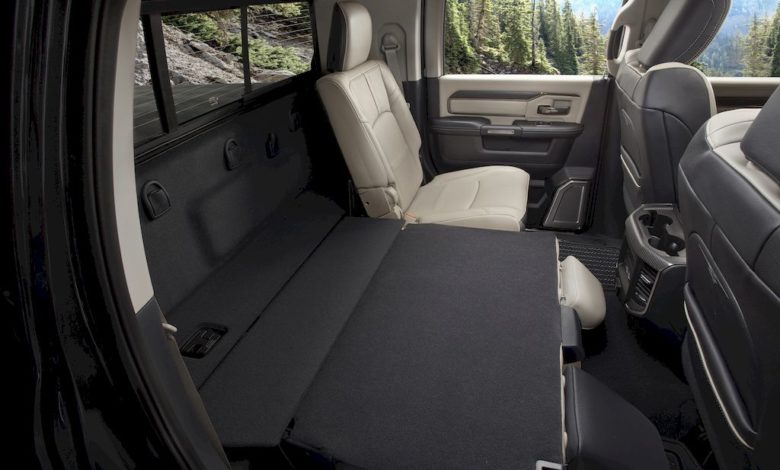 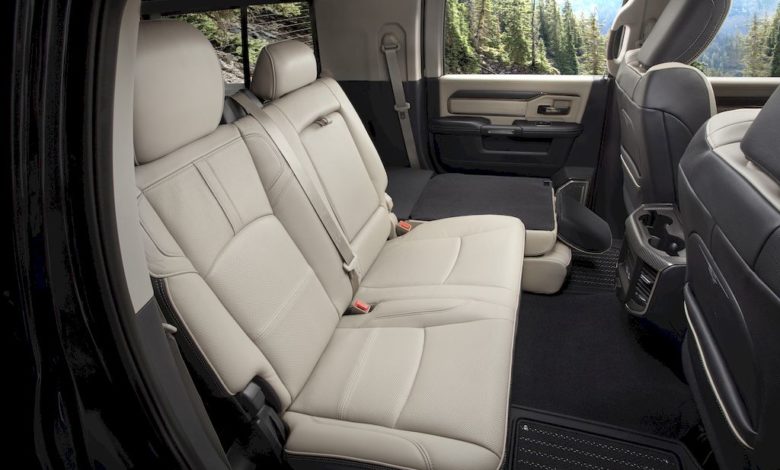 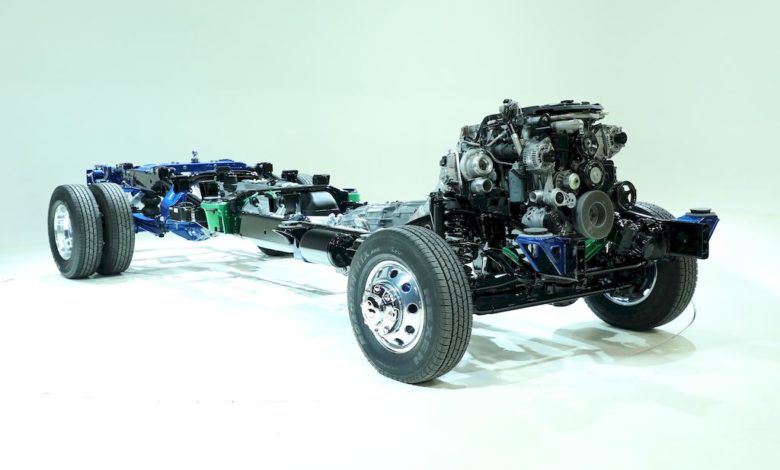 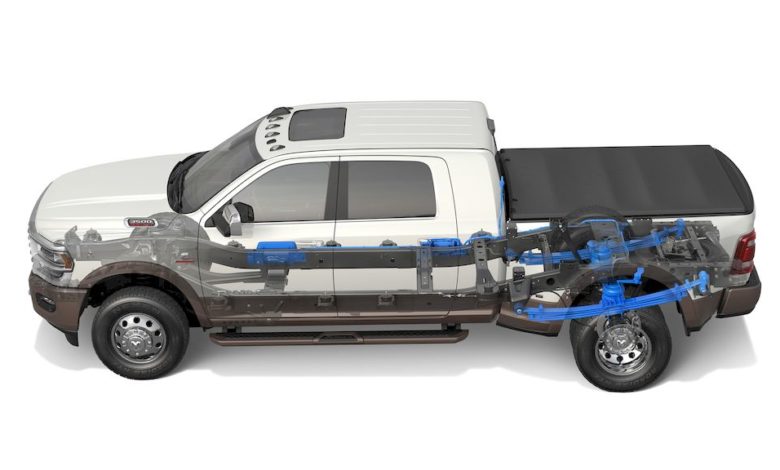 The new Ram Heavy Duty also sets benchmarks in ride and handling, luxury, materials, innovation and technology, according to Ram.

Changes begin at the core, with a cylinder block made from compacted graphite iron. Overall, the new Cummins Turbo Diesel weighs more than 60 pounds less than the previous-generation engine, yet delivers more power and torque.

A new cast-iron cylinder head builds on the new block with changes that include new exhaust valves and springs, and new rocker arms. Lighter and stronger pistons include new low-friction rings and connect to the crankshaft via newly design forged connecting rods and new bearings. An all-new exhaust manifold is the mounting point for an improved variable-geometry turbocharger with laminated heat shields, delivering boost pressure up to 33 psi, according to Ram.

Ram 3500 Heavy Duty models equipped with the 1,000 lb.-ft. high output Cummins 6.7-liter Turbo Diesel employ the Aisin AS69RC electronically controlled six-speed automatic. This transmission is engineered to handle the colossal torque of the Turbo Diesel engine and increased vehicle weight ratings while delivering improved shift quality, according to Ram. Along with hardware upgrades, the Aisin AS69RC uses a new transmission controller with double the memory of the previous controller and a dual-core processor. This delivers faster, more precise shifts under all driving and loading conditions.

In a first for the Ram Heavy Duty, the 6.4-liter HEMI V-8 comes mated to the smooth-shifting TorqueFlite 8HP75 eight-speed automatic. There are more than 40 individual shift maps to optimize shift points for fuel economy, performance and drivability. The transmissions use shift-by-wire technology, eliminating a mechanical linkage between the transmission and the gear selector.

The 2019 Ram Heavy Duty uses an innovative rotary e-shift dial mounted on the left side of the instrument panel’s center stack, freeing up space traditionally occupied by a console- or column-mounted shift lever.

Wide front frame rails enable front suspension springs to be positioned slightly outboard, an enabler for generating positive roll stiffness. In the rear portion of the new frame, the structure includes fully boxed rear rails. The rear-axle structural crossmember with provisions for fifth-wheel and gooseneck hitches, has been upgraded for 2019 to accommodate the increased towing capacity.

On vehicles equipped with the optional auxiliary camera prep package, the standard 4/7-pin bumper connector is replaced with a 12/7-pin connector to support the remote camera option. A tailgate handle-mounted, rear high-definition camera backup system is standard with dynamic imaging on the 12-inch, 8.4-inch or 5-inch displays with turning guidelines.

Also, the cargo-view camera located in the Center High-Mounted Stop Light (CHMSL) provides a view of the bed for easier connection to fifth-wheel or gooseneck trailers, as well as monitoring bed loads.

The 2019 Ram Heavy Duty includes Frequency Response Damping (FRD) shocks on all four corners. The valves of an FRD shock automatically adjust for the type of vertical wheel input, allowing the Ram Heavy Duty to have sports-car-like suspension for handling and a supple suspension on rough terrain.

Engineers added progressive springs and upgraded bushings to the suspension system, including the exclusive five-link coil design on Ram 2500, providing better load-carrying characteristics and improved articulation over obstacles when compared to a leaf-spring system.

A class-exclusive Active-Level rear air suspension is available on both the Ram 2500 and Ram 3500 and includes a new bed-lowering mode to make the heaviest trailer hook-ups a breeze, according to the truck maker.

The 2019 Ram 2500 uses two air bags to replace the coil springs. Load capacity is not sacrificed and the Ram 2500’s best-in-class ride and handling gets even better, according to the company. The Ram 3500 features a Hotchkiss rear leaf-spring system with optional air suspension. By adding supplemental air bags, Ram engineers were able to soften the heavy-load leaf springs, allowing for more unladed suspension movement.

Several body elements are upgraded from mild steel to high-strength steel on the 2019 Heavy Duty pickups. Additional light-weighting efforts consist of an aluminum hood, which contributes to an overall weight reduction of 143 pounds on the volume model, according to Ram.

Safety & Security
The new 2019 Ram 2500 and 3500 Heavy Duty pickups include more than 100 available safety and security elements, including an array of active and passive systems to assist the driver and passengers, offered in all models.

The Ram Heavy Duty also offers a second rear-view camera (cargo-view camera) to monitor payload in the bed. It also can be used to align fifth-wheel and gooseneck trailers. Back-up sensors on the Ram 3500 include specifically designed sensors to cover the added width of dual rear wheels, giving a wider span of coverage when backing up with limited view.

The new instrument panel combines a strong, structurally interlocking appearance, pushing the central controls up and toward the driver, improving overall reachability of system controls, according to Ram.

The 2019 Ram Heavy Duty features the Uconnect 4C NAV on a 12-inch fully configurable touchscreen, which can display one application, such as the navigation map, across the whole 12-inch screen, or can be divided in half, operating two different applications at once. Redundant HVAC controls and a new enhanced-ergonomic switch bank deliver improved feedback and appearance, according to Ram.

All-new in-duct electric heating elements on diesel models help speed cabin warmup on cold days, and larger system controls and new larger panel ducts work better with gloved hands, according to Ram.
With up to 258 liters of interior storage volume on the exclusive Mega Cab including two bins behind the rear seats, the 2019 Ram Heavy Duty offers more than 120-percent additional storage capacity versus the closest competitor, according to the company.

To keep devices charged, five USB ports assist in the center console type-C ports for faster communication and charging. Up to three 115-volt household plugs are available (three-prong). One in the first row and one in the second row. All outlets now handle up to 400 watts to charge or power tools quickly.

The 2019 Ram Heavy Duty is available in six different grille styles with a complete departure from the historic crosshairs. The new front bumper is cut with larger openings, providing greater airflow to the largest turbo intercooler Ram has ever adapted to its halo pickups, according to the company. More than 20 sensors surrounding the new Ram Heavy Duty are seamlessly integrated to make them less visible. A removable air dam helps mold the most aerodynamic Heavy Duty Ram has offered.

Three headlamp variations are available delivering the best lighting in the segment: Halogen, full LED/reflector and full LED/projector with Adaptive Front-lighting System (AFS) for up to 15 degrees of movement in the expected direction of travel.
The RamBox Cargo Management System includes weatherproof, lockable, illuminated and drainable storage bins built into the bed rails. New for 2019, RamBox features a 115-volt outlet with up to 400-watts of power.