A recreation of the Pontiac Tempest that shocked the racing world in 1963 by beating Ferrari GTOs and factory Corvette ZO6s at Daytona, and later served as the launchpad for the Pontiac GTO, will arrive later this summer at the Motorsports Hall of Fame of America (MSHFA).

The original car, built by Ray Nichels (MSHFA Class of 2021) under the direction of then-Pontiac Chief Engineer and GTO mastermind John Z. DeLorean, and driven to victory by Paul Goldsmith (MSHFA Class of 2008) in the 250-mile February 16, 1963, American Challenge Cup.

The recreation, built by Roger Rosebush and Jim Luikens, used as many period-correct parts as possible. The original car was one of a dozen lightweight, dual-quad 421 CID Super Duty V8-powered Tempests that Pontiac built for drag racing in the A/FX (Factory Experimental) class.

The engine featured a forged steel crank and rods, high compression (11.0:1) forged aluminum pistons and dual-quad Carter carburetors. It was rated by Pontiac at 405 HP, but actual horsepower was closer to 500, according to the museum.

The MSHFA provided the following history of the Super Duty Tempest:

“We are so grateful to Deb and Roger Rosebush for donating the legendary No. 50 Pontiac Tempest to the Motorsports Hall of Fame of America,” said MSHFA President George Levy. “John DeLorean had an idea for putting a big engine in a Tempest and wanted to show the world what it could do, so he authorized construction of the original No. 50 — in essence the first Pontiac GTO. The production version got its name, in part, from the No. 50 beating the Ferrari GTOs here at Daytona.”

Mickey Thompson is thought to be the first person to put a Super Duty 421 into a Tempest, according to the museum. The 12 factory cars followed. One of the 12 was campaigned by DeLorean’s late brother George DeLorean. 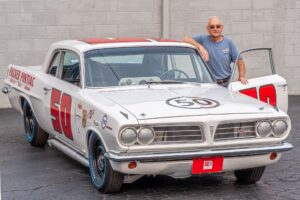 Unlike the other 11 Super Duty Tempests, the No. 50 car was sent to Nichels Engineering in Merrillville, Indiana to be turned into a road racer. Nichels was under contract to Pontiac primarily to develop and campaign cars for USAC and NASCAR Cup Series stock car racing. Racing was critical to Pontiac’s emerging performance image. Together, Goldsmith and Nichels had won the 1961 and ’62 USAC stock car titles. Pontiac won its first and only NASCAR manufacturer’s championship in 1962 as well. Joe Weatherly (MSHFA Class of 2009) won consecutive NASCAR driver’s titles mainly in Bud Moore (MSHFA Class of 2013) Pontiacs in 1962 and ’63. The idea for the GTO originated with a suggestion by celebrated Pontiac engineer Bill Collins to continue that success.

Like the other 11 cars, the Nichels Tempest had lightweight aluminum front-end sheetmetal, acid-dipped bumpers, a rear-mounted battery and no radio, heater or sound-deadening. The Super Duty Tempests also had another advantage more favorable to road-course work than the dragstrip, near perfect 50/50 weight distribution: 1,737 lbs on the front axle, 1,757 on the rear. Part of the reason the weight was more balanced than in most front-engine cars was because power was delivered to the rear wheels by Collins’ rear-mounted 4-speed PowerShift transaxle with torsion bar driveshaft.

Nichels maximized the No. 50 for track use by modifying the springs, shocks and steering, and by adding a roll cage, NASCAR brakes and Goodyear Blue Streak racing tires to replace the drag slicks. To keep the motor healthy in contests longer than a quarter mile, he installed oil coolers and a special alloy radiator with Corvette expansion tank.

Creating a road racing version of one of the Super Duty Tempests was the brainchild of DeLorean, who wanted to set the stage for the introduction of the Pontiac GTO. The GTO was the first of the American big-engine-small-chassis muscle cars that came to define the ‘60s.

“After finishing the recreation of the No. 50 Pontiac Tempest race car and the recent loss of my project partner, Jim Luikens, I was thinking about what I should do with the completed project car that would allow the public to enjoy it and learn from it as much as I did while working on it,” says Rosebush, who serves on the Motorsports Hall of Fame of America Board of Directors. The car is expected to arrive at the Hall of Fame on or about July 20.