*See images in the photo gallery above

Most of Mopar’s 200-plus new Jeep Performance Parts and accessories for the JL will be available when the vehicle arrives in dealerships.

An array of new Jeep Performance Parts and accessories pulled from the Mopar brand’s menu enhances the new Rubicon on display at the LA Auto Show.

A set of 2-inch-round steel tube doors adds to the open-air freedom of the all-new Wrangler. The four-door’s eye-catching Mojito Green exterior, a production option, is protected by new Jeep Performance Parts rock rails that are thicker and wider than previous offerings and augmented with a new, grippier coating similar to that used on Ram Truck bedliners.

New LED off-road lights, available in 5- and 7-inch applications, pump out a maximum of 8,000 lumens, putting commercial and military grade illumination into the hands of hard-core off-roaders. The off-road lights mount to the frame rails or windshield via new Jeep Performance Parts off-road light brackets. A new auxiliary switch bank, standard on the Rubicon and an available option for other trim levels, features its own power distribution center and offers an organized central area for operating accessories such as the off-road lights, winch and other electrical-powered items, according to Mopar.

A Jeep Performance Parts snorkel attaches using a hood cutout kit and works in concert with a Mopar cold-air intake to feed cool air to the 3.6-liter engine and keep water out during deep-water crossings.

The new spare tire tailgate hinge to handle up to 37-inch tires. The new Mopar Center High-Mount Stop Light (CHMSL) light relocation kit keeps the brake light visible when using the spare tire carrier, without interfering in use of the rearview camera.

All-weather floor mats fit like a glove and feature a new topographic design inspired by the rugged Moab trails. An integrated plug allows accumulated water and debris captured in the high-walled mats to be drained without removal.

Katzkin leather seats are embroidered with the distinctive Jeep grille logo in Tungsten stitching. A screen protector, another first-ever Mopar product, protects and even enhances visibility of the 8.4-inch Uconnect system display, according to the company.

The Mopar roof rack is mounted to the hardtop of the 2018 Jeep Wrangler Sport on display in Los Angeles.  The Jeep is also equipped with a cargo carrier added for transport of gear and equipment. Bicycle, ski and snowboard carriers are also available options from Mopar.

The newly redesigned Mopar hardtop headliner enhances and insulates the interior while providing a quieter ride, according to the company. The exterior of the white Wrangler stands out with new American-flag-themed hood graphics and silhouette bodyside graphics that mirror the famed Moab trails.

The Jeep includes a Mopar tailgate table, which can be mounted with or without the new production Trailrail system. The table flips out to create a utility space and beverage holder and folds up for storage. Katzkin leather seats are embroidered on the inside with the Jeep grille logo.

The black fuel door, new from Mopar, has been redesigned to incorporate styling cues of the all-new Wrangler. Mopar doorsill guards, grab handles and all-weather floormats round out the Mopar accessories. 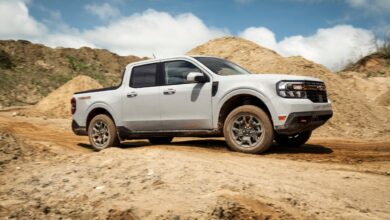 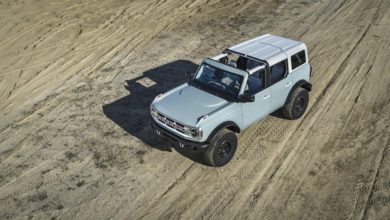