The Conference Board Consumer Confidence Index® reported a slight uptick during February, following an increase in January. “Despite the decline in the Present Situation Index, consumers continue to view current conditions quite favorably. Consumers’ short-term expectations improved, and when coupled with solid employment growth, should be enough to continue to support spending and economic growth in the near term,” said Lynn Franco, senior director of economic indicators.

Low unemployment, healthy job gains, an increase in hourly earnings and stability in the housing market are up against a simmering vehicle market, unresolved trade tensions, a growing COVID-19 pandemic and a tumultuous U.S election year. Other consumer-level expert feedback includes:

• According to University of Michigan, the consumer sentiment index was revised slightly higher to 101 from a preliminary of 100.9 during February 2020—the highest reading since March of 2018. “The gauge for current conditions was higher than expected (114.8 from a preliminary of 113.8), while expectations rose less (92.1 from 92.6). Inflation for the year ahead was seen at 2.4%, down from a preliminary of 2.5% while those for the five-year outlook fell were unchanged at 2.3%. The coronavirus was mentioned by 8% of all consumers in February although on the last days of the February survey, 20% mentioned the coronavirus due to the steep drop in equity prices as well as the CDC warnings about the potential domestic threat of the virus.” 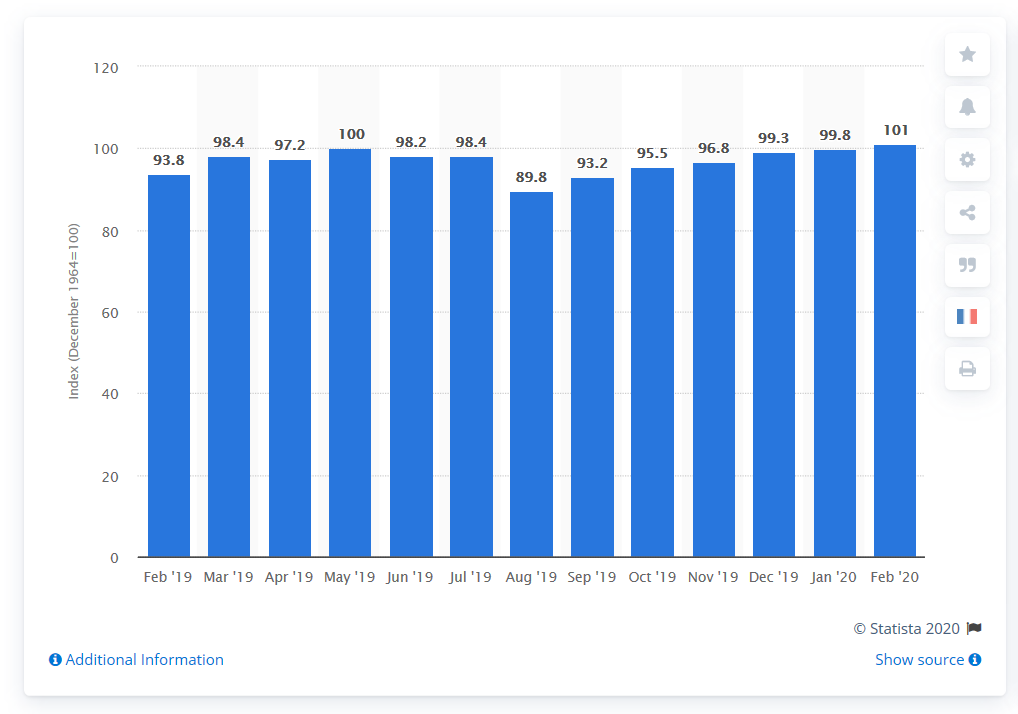 • During March, University of Michigan’s consumer sentiment for the U.S. fell to 95.9 from 101 the previous month, but it landed above the market consensus of 95—the lowest reading since October due to COVID-19 and the sharp declines in stock prices.

• U.S. total retail sales of $528.1 billion were down 0.5% compared to January’s $530.9 billion, which increased 4.3% compared to February 2019. Reports state total retail sales, from December 2019 through February 2020, rose 4.9% compared to the same period a year ago. Looking at specific sectors, data points to February retail trade sales as up 0.5% over January and up 4.2% annually. Non-store retailers, including e-commerce, food services and drinking places, increased 7.5% and 5.2%, respectively. Due to ongoing COVID-19 concerns, March retail sales are expected to be much lower than originally anticipated:

• It should come as a surprise to no one that the U.S. government has reached out to the retail industry for assistance in this time of crisis. Our retail leaders stand at the ready to react and respond to help ensure the security and safety of employees and consumers alike in the communities they serve. We know the effects of this virus are impacting millions of people, directly and indirectly, in the U.S. and around the world. Retail brands are always on the frontline with citizens in communities large and small, and they are partnering with the health care industry and government officials to ensure COVID-19 is contained and mitigated as quickly as possible. Retailers are grateful for the opportunity to play such an important role and look forward to continued collaboration on the municipal, state and federal levels. – Matthew Shay, National Retail Federation (NRF) President and CEO

• The Consumer Price Index for All Urban Consumers (CPI-U) rose 0.1% during February on a seasonally adjusted basis, which is the same increase as January, according to the U.S. Bureau of Labor Statistics. Over the last 12 months, the all items index increased 2.3% before seasonal adjustment.

• Increases in the indexes for shelter and food were the main causes of the increase in the seasonally adjusted all items index, more than offsetting a decline in the energy index. The food index increased 0.4% over the month, with the food at home index rising 0.5%, its largest monthly increase since May 2014.

• The index for energy fell 2.0%, with all of its major component indexes declining.

• The index for all items less food and energy rose 0.2%, the same increase as in January. Along with the index for shelter, the indexes for apparel, personal care, used cars and trucks, education and medical care were among those that increased. The indexes for recreation and airline fares declined over the month.

• The all items index increased 2.3% for the 12 months ending February, a smaller increase than the 2.5% figure for the period ending January.

• Import fuel prices decreased 7.7% in February, the largest monthly decline since the index dropped 7.8% in June 2019. The February decrease was led by lower prices for petroleum, though falling prices for natural gas also contributed to the monthly decline. Petroleum prices dropped 7.6% following no change in January and a 0.5% advance in December. The price index for natural gas declined 12.4% in February, after decreasing 13.2% in January. Import fuel prices fell 5.8% over the past 12 months, driven by a 5.5% drop in petroleum prices and a 13.9% decline in natural gas prices.