LMC Automotive reports Global Light Vehicle (LV) sales improved to 94 million units per year in August, the strongest gains of the year thus far but still down 3.8% year-over-year. While China continues to recover and spur an increased global selling rate, other major markets like Europe and the U.S. remain hamstrung by ongoing supply chain disruptions.

“The surge of volume in China is expected to drive the forecast for 2022 global light-vehicle sales higher by nearly 1 million units to 81.8 million, tipping the market to an increase of 0.4% from 2021. China sales projections have been increased to 27.4 for the year, up 8% from 2021,” says Jeff Schuster, president of Americas operations and global vehicle forecasts at LMC Automotive. 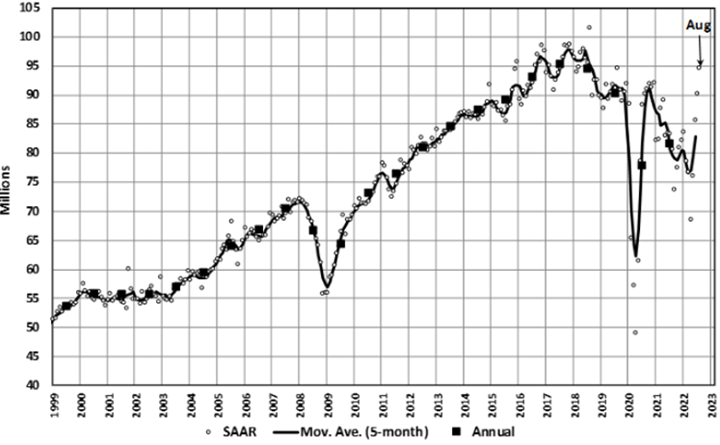 The July Manufacturing PMI® registered 52.8%, down 0.2 percentage point from a reading of 53% in June and the same as July, according to supply executives in the latest Manufacturing ISM® Report On Business®.

According to Business Survey Committee respondents’ comments, Fiore says companies continued to hire at strong rates in August, with few indications of layoffs, hiring freezes or head-count reductions through attrition. Panelists, he says, reported lower rates of quits, which is indeed a positive trend. Prices expansion eased dramatically in August as well, which, when coupled with lead times easing, should bring buyers back into the market and improve new order levels. However, Fiore says panelists continued to express unease toward a softening economy. 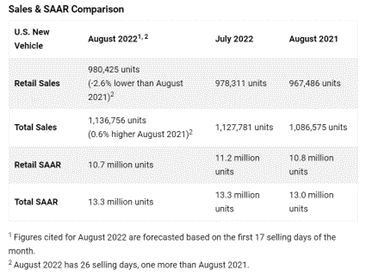 Total new vehicle sales for August 2022, including retail and non-retail transactions, are projected to reach 1,136,800 units – a 0.6% year-over-year increase. Comparing the sales volume without adjusting for the number of selling days translates to an increase of 4.6% from 2021, according to a joint forecast from J.D. Power and LMC Automotive.

“Traditionally, August is a high-volume sales month as manufacturers launch marketing actions to clear out the last model-year vehicles and start sales of the new model-year products,” says Thomas King, president of the data and analytics division at J.D. Power.

“This August, the industry is still constrained by insufficient inventory to meet robust consumer demand. The result is a retail sales pace that fails to fulfill its potential. However, the silver lining for retailers – and manufacturers – is that transaction prices and profits are continuing to reach record levels even in the face of rising interest rates,” he adds.

“In September, the constraints are expected to continue with sales being hampered by available inventory. In the near term, prices and per-unit profitability will remain strong. Shoppers waiting for Labor Day sales events with substantial discounts on outgoing model-year vehicles will be frustrated by the lack of markdowns and choice of vehicles,” King says. “However, for the time being, there are plenty of new-vehicle buyers willing to pay higher prices and be less selective.”

Wholesale used-vehicle prices (on a mix, mileage and seasonally adjusted basis) decreased 4% month-over-month. The Manheim Used Vehicle Value Index declined to 210.8 but is up 8.4% from a year ago.

In August, Manheim Market Report (MMR) values posted larger-than-normal declines that were consistent over the month. Over the last four weeks, the Three-Year-Old Index decreased a net 2.5%.

According to Manheim, all major market segments posted seasonally adjusted prices that were higher year-over-year in August, except for full-size cars. Compact cars recorded the largest increase at 15.9%, followed by vans and midsize cars, which all had seasonally adjusted year-over-year gains ahead of the overall industry. Compared to July, all eight major segments’ performance was down. Sports cars lost nearly 5%, while compact and midsize cars declined 3.5% and 3%, respectively. SUVs were down 4.3%, while vans were down 2.9%. 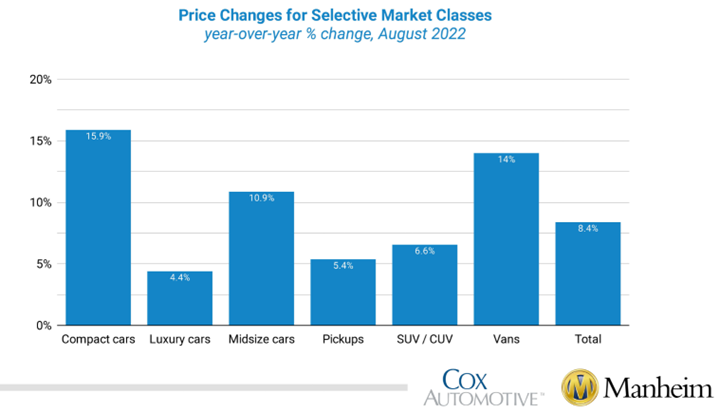 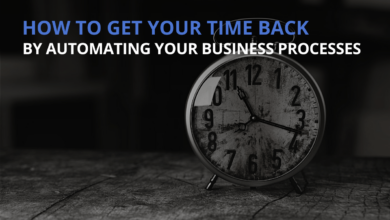