The Conference Board forecasts U.S. real GDP growth will be 7% (annualized rate) in Q3 2021 and 6% (year-over-year) in Q4 2021. Following a steady economic rebound in H1 2021, economic recovery is expected to continue throughout the year but slow to a more moderate level. As such, The Conference Board is adjusting its annual growth forecasts.

Important Takeaways, Courtesy of The Conference Board:

“We continue to monitor two trends, which could put a damper on employment growth. First, the number of new COVID-19 infections continues to increase, holding back economic and job market recovery. Second, the labor market continues to experience historical recruiting difficulties,” he said.

According to a survey of the National Federation of Independent Business, 50% of small employers reported difficulty filling positions in August, an all-time high accompanied by rapidly rising wages. Towards the end of 2021, these severe labor shortages may ease as enhanced unemployment benefits expire and schools reopen, leading more workers to return to the labor market.

“We expect another month of sub-par job growth in September, but strong job growth likely will resume in the last quarter of 2021. Since COVID-19 is not going away anytime soon, a return to normal spending on, and employment in, in-person services is unlikely to happen in 2021,” added Levanon. 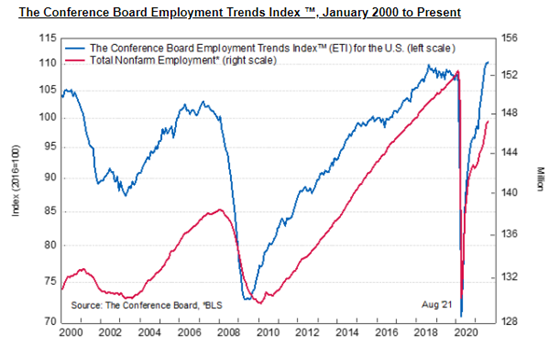 Job creation for August was “a huge disappointment,” with the economy adding 235,000 positions versus expectations of 720,000, said Jeff Cox of CNBC. The unemployment rate declined by .2 percentage points to 5.2%, according to the U.S. Bureau of Labor Statistics. 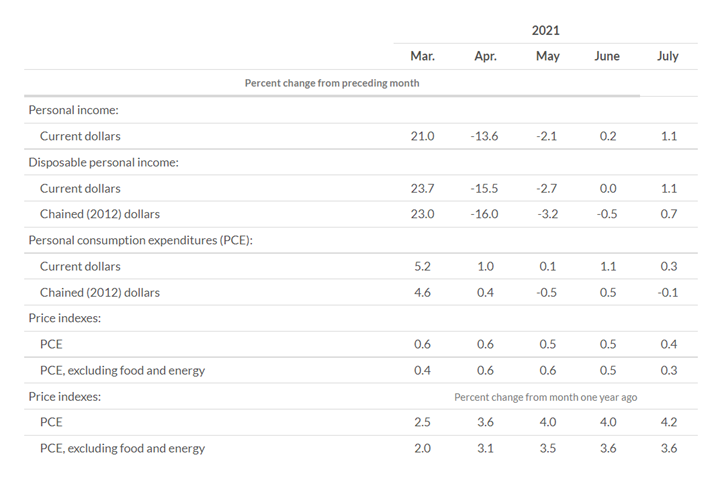 According to the U.S. Bureau of Economic Analysis (BEA), the increase in personal income in July primarily reflected increases in government social benefits and compensation of employees. Within government social benefits, an increase in “other” social benefits (more than accounted for by advance Child Tax Credit payments as authorized by the American Rescue Plan) was partly offset by a decrease in unemployment insurance, reflecting a decrease in payments from the Pandemic Unemployment Compensation program. Personal outlays increased $45.4 billion, while personal saving was $1.72 trillion and the personal saving rate – personal saving as a percentage of disposable personal income – was 9.6%. 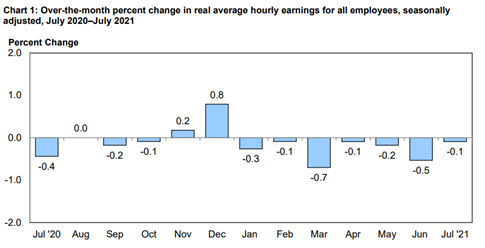 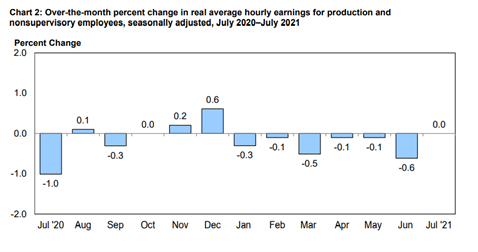 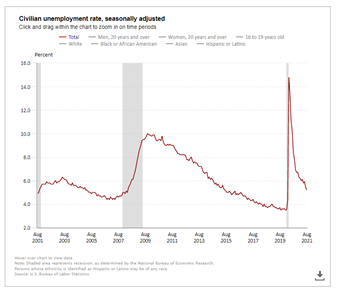 “Weaker employment activity is likely both a demand and supply story – companies paused hiring in the face of weaker demand and uncertainty about the future, while workers withdrew due to health concerns,” said Joseph Song, Bank of America economist.