Total new vehicle sales improved for the fifth consecutive month in September, with the SAAR hitting 16.3 million—a 5% decrease from 17.1 million last year but an improvement compared to 15.2 million last month, according to Cox Automotive. 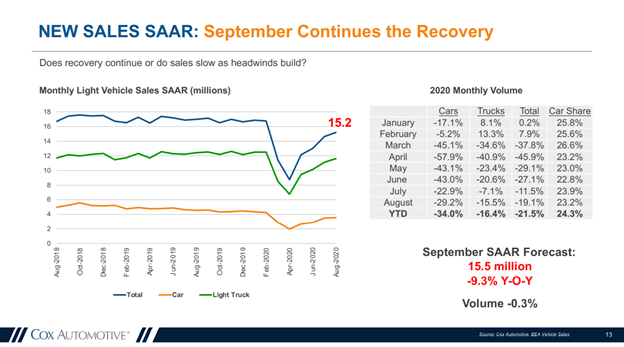 While new vehicle sales are heading in the right direction, the market is faced with low supply, less incentives and high prices.

The good news, “A strong sales pace is occurring despite tight inventories,” noted Thomas King, president of J.D. Power analytics division. “The combination of strong demand and lean inventories is enabling manufacturers to reduce new-vehicle incentives and is allowing retailers to reduce the discounts they typically offer on new vehicles,” he continued.

Case in point, the average new vehicle incentive from manufacturers is approximately $3,678 per vehicle, a year-over-year decrease of $425, and the second consecutive month below $4,000, according to J.D. Power.

Furthermore, “Expressed as a percentage of the average vehicle MSRP, incentives for October are 8.7%, down 1.4 percentage points from a year ago and below 9% for the first time since June 2016,” added J.D. Power. For context, incentive spending peaked at $4,953 per unit in April 2020.

For dealers, inventory levels continue to be a severe pain point. “Those who turn the most, earn the most,” said Brian Finkelmeyer, senior director of new car solutions at Cox Automotive. “In other words, the dealers able to keep inventory moving are the ones who are earning healthy allocations from their automaker partners,” he explained.

“In the market right now, inventory is king. And this race for inventory is likely to continue for the foreseeable future, as wholesale shipments to dealers in August and September only reached 83% of the expected norm for this time of year,” added Finkelmeyer. 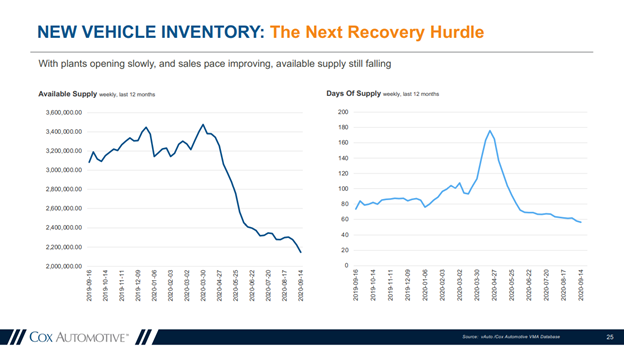 On a positive note, “Leaner inventories have made the business more efficient and helped in the industry’s ongoing efforts to control costs,” said Mike Manley, CEO for Fiat Chrysler.

As such, the SAAR is expected to inch near 16.4 million—up slightly from the 16.3 million posted last month but down from the 16.8 million level a year ago, according to Cox Automotive.

“Given the severity of the health and economic crisis in the country right now, the strong vehicle sales pace is a pleasant surprise, particularly when six months ago most market observers didn’t expect us to be here,” said Charlie Chesbrough, senior economist at Cox Automotive.

“Modest improvements in the U.S. economy from gains in consumer confidence and job creation, coupled with the roll-out of new MY2021 products, are keeping consumers interested in purchasing even during turbulent times,” added Chesbrough.

Total used vehicle sales volume was down 5% year-over-year in September. The used SAAR registered at 38 million, down from 39.8 million last September and flat compared to August. 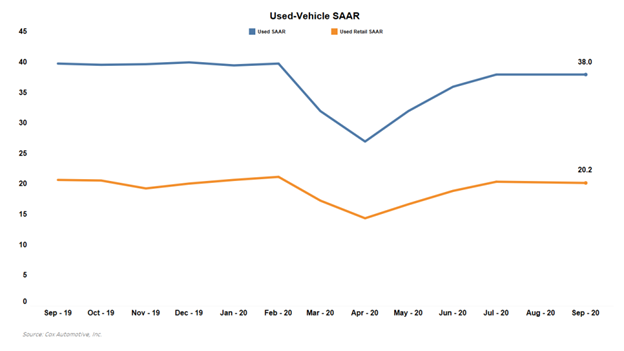 Sales of certified pre-owned (CPO) vehicles increased nearly 10% year-over-year in September but were down 6% month-over-month compared to August. For September, 224,536 CPO units were sold, according to Cox Automotive. Read the full analysis here. 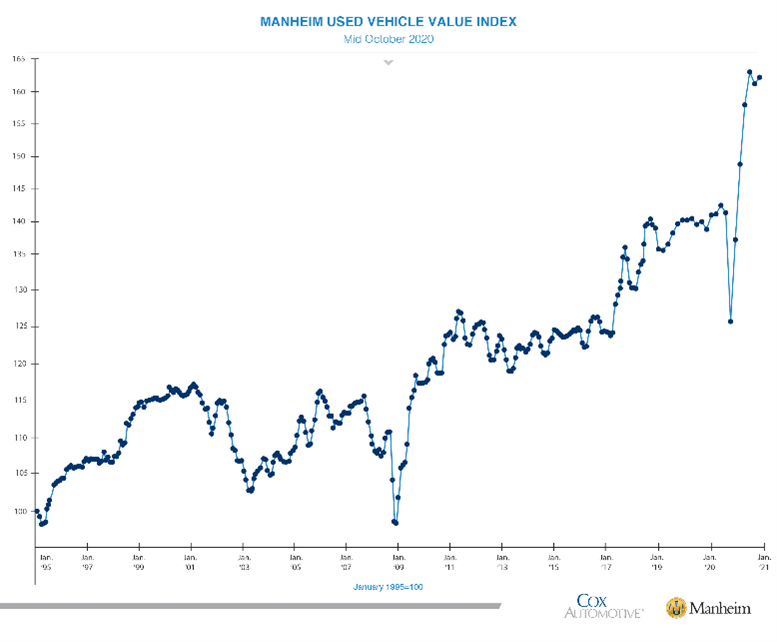 Compared to September, wholesale used vehicle prices (on a mix-, mileage- and seasonally adjusted basis) increased 0.9% in the first 15 days of October. This brought the mid-month Manheim Used Vehicle Value Index to 162.7, a 16.0% increase from October 2019.

The used vehicle market is having a record year. It is quite possible to hit 36.1 million used-vehicle sales, according to a recent forecast by Cox Automotive. However, the projection is heavily reliant on whether another federal stimulus package arrives.

“If we fail to see any stimulus before year-end, the odds grow for a double-dip recession and higher unemployment to end the year,” said Smoke. “If that’s the case, credit will become more challenging and sales could be lower than we’re forecasting. If we have a bigger stimulus package, the used market could particularly be stronger and, of course, much continues to depend on the virus itself and the timing of vaccines.”