The semiconductor crisis continues to freefall, taking the global selling rate with it. Global Light Vehicle (LV) sales slipped to 80 mn units/year in August, marking the lowest result in over a year, according to LMC Automotive.

“Looking at September, the inventory constraint is expected to intensify,” stated Jeff Schuster, president of Americas operations and global vehicle forecasts for LMC Automotive. “We forecast volume to fall 20% from September 2020, with volume at 6.3 million units and a subdued selling rate of 73 million units – nearly 18 million units below September 2020.”

As such, the auto industry is facing an extended delayed recovery. “We have substantially cut our outlook for global light vehicles in 2021 and 2022. We expect 2021 volume to be three million units lower than our forecast a month ago – now just 80.6 million units, an increase of 4% from 2020,” said Schuster. “With the extension of the chip shortage, the outlook for 2022 has been cut by 6.5 million units to 85.2 million. The situation remains extremely fluid and additional downside risk of five million units remains for 2022.” 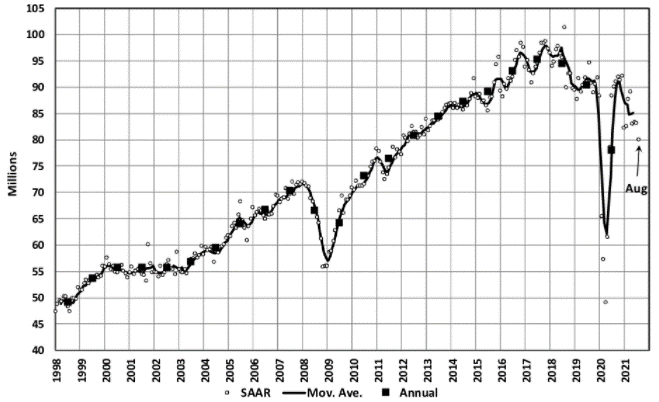 Global Light Vehicle (LV) sales slipped to 80 mn units/year in August, marking the lowest result in over a year, according to LMC Automotive.

On the manufacturing side, the September Manufacturing PMI® registered 61.1%, an increase of 1.2 percentage points from an August reading of 59.9%. The data indicates expansion in the overall economy for the 16th month in a row after contraction in April 2020, according to supply executives in the latest Manufacturing ISM® Report On Business®.

New-vehicle retail sales in September 2021 are expected to decline both year-over-year and compared to September 2019, according to a joint forecast from J.D. Power and LMC Automotive. 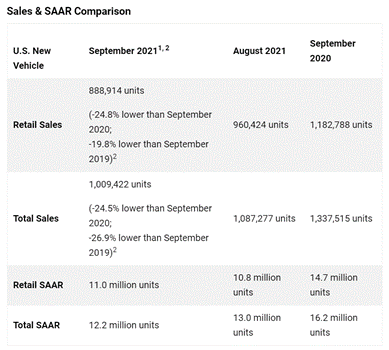 “September results show there are simply not enough vehicles available to meet consumer demand. Similar to August, inventory levels have been depleted to the extent that new vehicle sales are being dictated by how many vehicles are being delivered to dealerships each month. In September 2019, 1,020,000 retail sales occurred as buyers chose from 2.9 million vehicles in inventory. This month, retail customers will buy 888,900 vehicles, with just 920,000 in inventory,” said Thomas King, president of the data and analytics division at J.D. Power.

He noted the mismatch between strong consumer demand and constrained inventory is leading to unprecedented vehicle prices.

“Looking forward to October, with inventory and production levels at historical lows, dealers are turning vehicles on lots almost as soon they arrive and, as demand continues to exceed production, the overall industry sales pace will continue to be supply constrained. At these unprecedented low levels of inventory, the sales pace will be dictated mostly by manufacturers’ procurement, production and distribution activities,” said King. “However, regardless of inventory position or production levels, manufacturers and retailers will continue to benefit from the current intense level of consumer demand, achieving higher profits per every unit sold.” 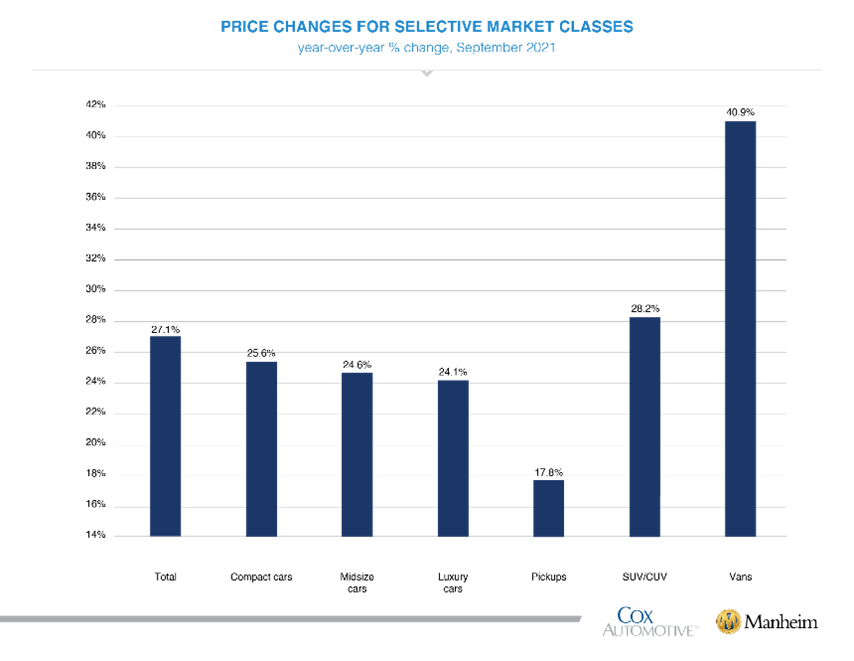 According to the most current report, the Manheim Market Report (MMR) values posted accelerating weekly increases throughout September. Over the full four weeks in the month, the Three-Year-Old Index increased a net 4.6%.

Overall, total used vehicle sales were down 13% year-over-year in September. Cox Automotive estimates the September used SAAR to be 36 million – a year-over-year decrease from 40.9 million and down compared to August’s 36.5 million SAAR. The September used retail SAAR estimate is 19.5 million, also down from 21.7 million last year and flat month-over-month.