Below is a synopsis of consumer confidence, sentiment and spending trends, as well as national housing market and retail analysis.

The Consumer Price Index for All Urban Consumers (CPI-U) was unchanged in October on a seasonally adjusted basis after rising 0.2% in September, according to the U.S. Bureau of Labor Statistics. The all items index increased 1.2% (before seasonal adjustment) over the last 12 months, a slightly smaller increase compared to the 1.4% rise for the 12-month period ending September.

Component indexes were mixed, showing many offsetting increases and decreases. For example, the food index rose 0.2%, with the food away from home index increasing by 0.3% and a smaller 0.1% rise in the food at home index. The energy index rose 0.1% in October as the index for electricity increased 1.2%. 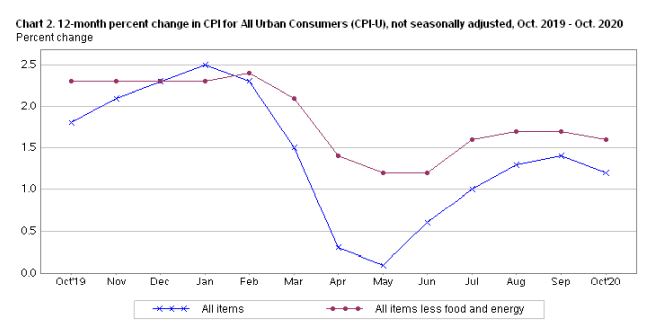 The Consumer Sentiment Index—a survey consisting of approximately 50 core questions that cover consumers’ assessments of their personal financial situation, buying attitudes and overall economic conditions—finished at 81.8 in October. However, the index is trending down (77.0) in November’s preliminary reading conducted by the University of Michigan Survey of Consumers.

In these tumultuous times, the market is more vulnerable than ever and reacts quickly to disapproving news.

“Consumer sentiment fell in early November as consumers judged future economic prospects less favorably, while their assessments of current economic conditions remained largely unchanged. The outcome of the presidential election, as well as the resurgence in COVID-19 infections and deaths, were responsible for the early November decline,” said Richard Curtin, chief economist for the University of Michigan Survey of Consumers. 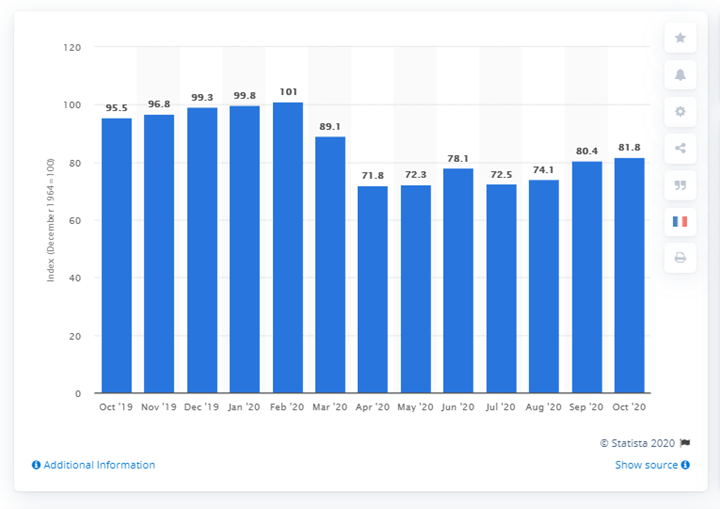 This graphic by Statista shows the U.S. Consumer Sentiment Index from October 2019 to October 2020. The index is normalized to have a value of 100 in December 1964 and based on a monthly survey of consumers, conducted in the continental United States. It consists of about 50 core questions, which cover consumers’ assessments of their personal financial situation, their buying attitudes and overall economic conditions. The Consumer Sentiment Index stood at 81.8 in October 2020.

The Conference Board Consumer Confidence Index® decreased in October as well, following a sharp increase. The Index now stands at 100.9 (1985=100), down from 101.3 a month prior.

“Consumers’ assessment of current conditions improved while expectations declined, driven primarily by a softening in the short-term outlook for jobs,” said Lynn Franco, senior director of economic indicators at The Conference Board. “There is little to suggest that consumers foresee the economy gaining momentum in the final months of 2020, especially with COVID-19 cases on the rise and unemployment still high.”

The part of the index that measures present conditions, which is based on consumers’ assessment of current business and labor market conditions, increased from 98.9 to 104.6. However, consumers were less optimistic this month about the future, as the expectations index dipped to 98.4 in October from 102.9 last month. Factors including the recent rise in coronavirus cases across the U.S., along with ongoing elevated job losses and uncertainty over the presidential election, may have played a part in consumers’ apprehension about the future. –Associated Press 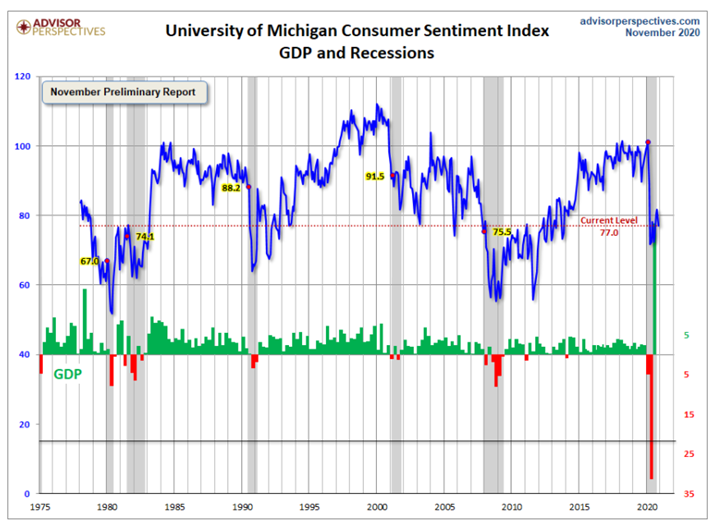 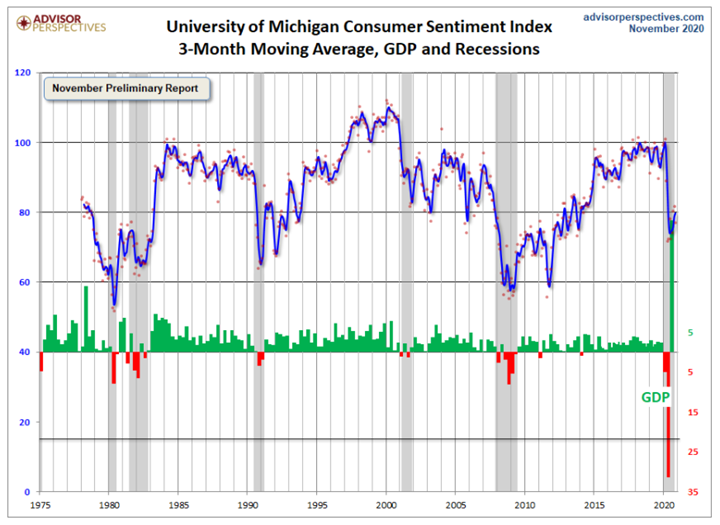 Jill Mislinski of Advisor Perspectives put the recent consumer sentiment report into larger historical context. Consumer sentiment is 10.7% below the average reading (arithmetic mean) and 9.7% below the geometric mean. The current index level is at the 26th percentile of the 515 monthly data points in this series. Note that this indicator is somewhat volatile, with a 3.0-point absolute average monthly change. The latest data point saw a 4.8-point decrease from the previous month. For a visual sense of the volatility, here is a chart with the monthly data and a three-month moving average. 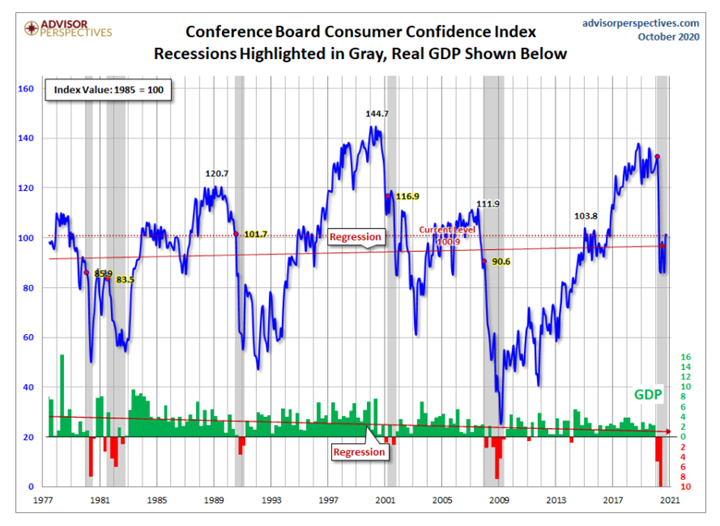 For the sake of comparison, here is a chart of the Conference Board’s Consumer Confidence Index (monthly update here). The Conference Board Index is the more volatile of the two, but the broad pattern and general trends have been remarkably similar to the Michigan Index, according to Mislinski of Advisor Perspectives. 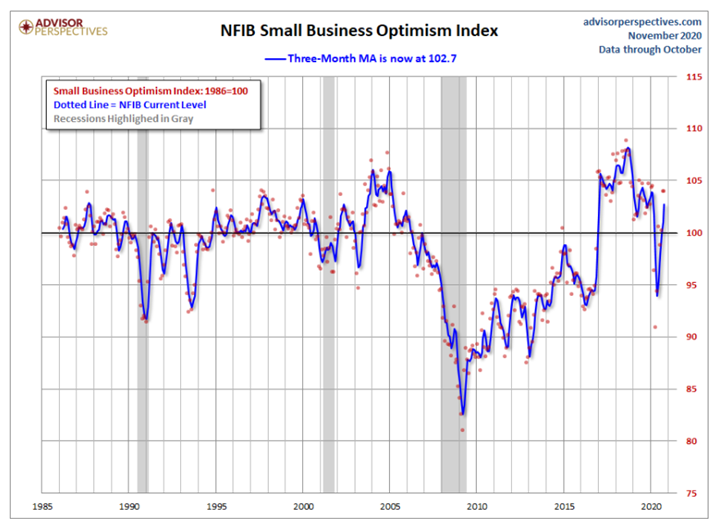 Consumers are anxious about rising COVID-19 cases, a continuing stalemate on additional fiscal stimulus and the unresolved status regarding control of the U.S. Senate, noted MarketWatch. However, “We appear to be moving closer to the other side of this pandemic,” added Keith Lerner, chief market strategist at SunTrust Advisory Services, a unit of Truist Financial. “We are likely in the very early innings of a multi-year economic expansion—monetary policy remains very supportive and relative valuations continue to favor stocks.”

In September, the $159.2 billion increase in real PCE—the value of the goods and services purchased by, or on the behalf of, U.S. residents—reflected an increase of $109.9 billion in spending for goods and a $61 billion increase in spending for services. Likewise, a bump in personal income reflected increases in proprietors’ income, compensation of employees and rental income of persons that were partly offset by a decrease in government social benefits, explained the Bureau of Economic Analysis. 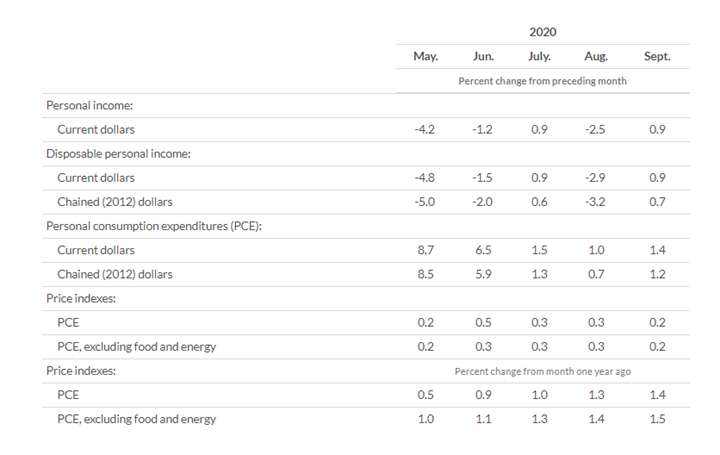 With nearly 70% of the U.S. economy tied to consumer spending, an increase in personal and disposable income is a bright spot. Retail sales grew for the sixth consecutive month during October, with sales improving thanks to an economy in recovery and consumers beginning their holiday shopping early, according to the National Retail Federation.

“The steady expansion of retail sales is good news against the background of these unusual economic circumstances and climbing virus cases in recent weeks. Early holiday shopping appears to have supported October’s increase in sales. The rise in COVID-19 cases continues to be a factor that weighs on consumer perceptions, sentiment and spending… and there could be retrenchment if we cannot thwart this latest wave,” said Kleinhenz.

Nonetheless, in contrast to the dip in confidence and sentiment reported by Surveys of Consumers and The Conference Board, “Consumers have proven their resilience and willingness to spend as we head into the heart of the holiday season and retailers continue to demonstrate their commitment and ability to ensure safe shopping environments for their customers and their associates, with deep discounts, robust inventory and great experiences whether in-store or online,” said Matthew Shay, NRF president and CEO.

Another area of spending: a super-hot housing market. Existing-home sales grew for the fourth consecutive month to a seasonally-adjusted annual rate of 6.54 million—up 9.4% from the prior month and nearly 21% from one year ago, according to the National Association of Realtors®. 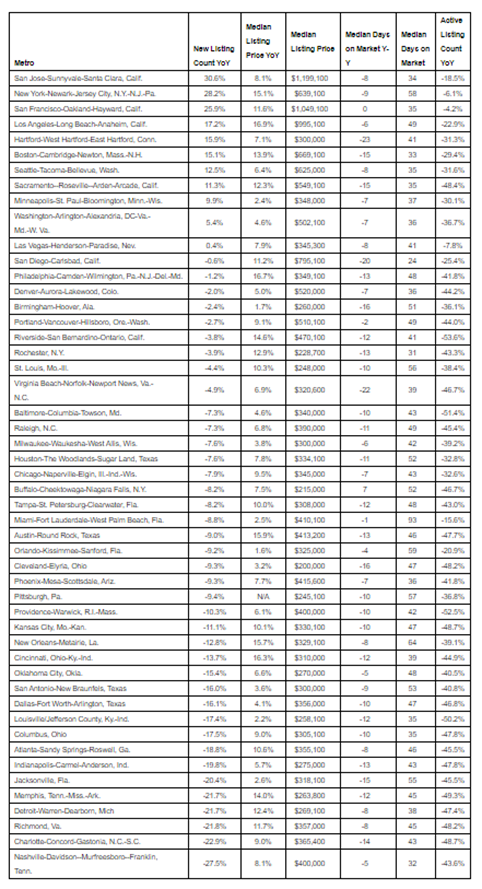