Sales hovered 86 million units per year in October. Volume was up nearly 12%, as a strong recovery in Asia combined with better prospects in the United States and Western Europe. Like September, October benefited from a low year-ago base, which subsequently kept most markets in positive growth territory, according to Jeff Schuster, president of Americas operations and global vehicle forecasts at LMC Automotive.

“Supply chain issues are expected to ease throughout 2023, but a full recovery is still not on the near-term horizon. The industry has cumulatively lost more than 30 million units since the start of the pandemic, some of which will not be recovered,” Schuster says. “Next year, we expect demand to increase 4% to 84.8 million units, but another year at 81 million units is certainly plausible given the high level of uncertainty that remains.” 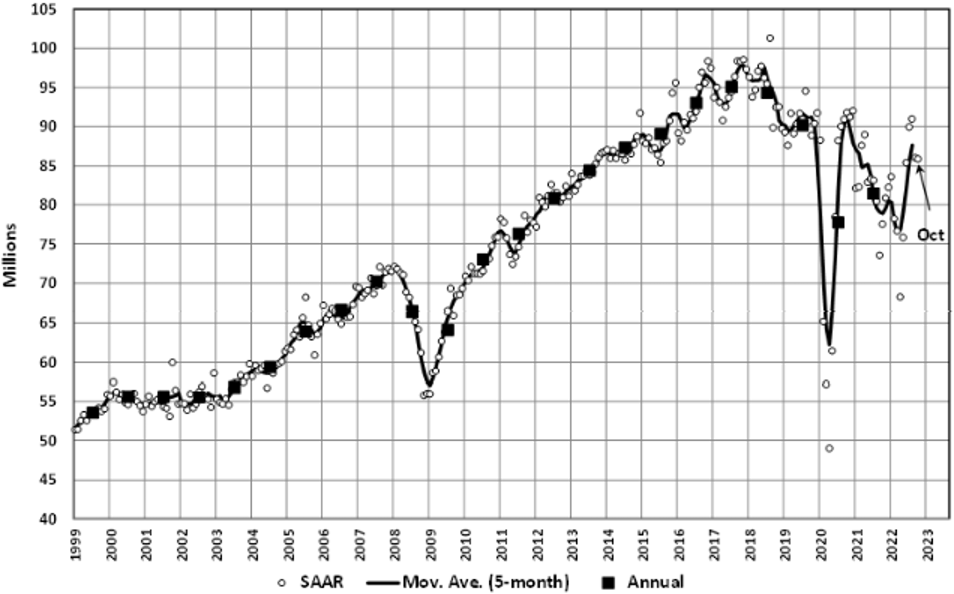 According to Business Survey Committee respondents’ comments, companies continue to carefully manage hiring. While month-over-month supplier delivery performance was the best since March 2009, the Prices Index indicated decreasing prices for the first time since May 2020. Like September, mentions of large-scale layoffs were absent from panelists’ comments, indicating companies are confident in near-term demand. As a result, Fiore says managing medium-term head counts and supply chain inventories remain primary goals. With the decline in the Backlog of Orders Index, buyers and sellers will begin to shore up order books and order streams to reduce share loss in the medium-to-long term.

Total new vehicle sales for October 2022, including retail and non-retail transactions, are projected to reach 1,157,900 units – a 15.2% year-over-year increase. Comparing the sales volume without adjusting for the number of selling days translates to an increase of 10.9% from 2021, according to a joint forecast from J.D. Power and LMC Automotive. 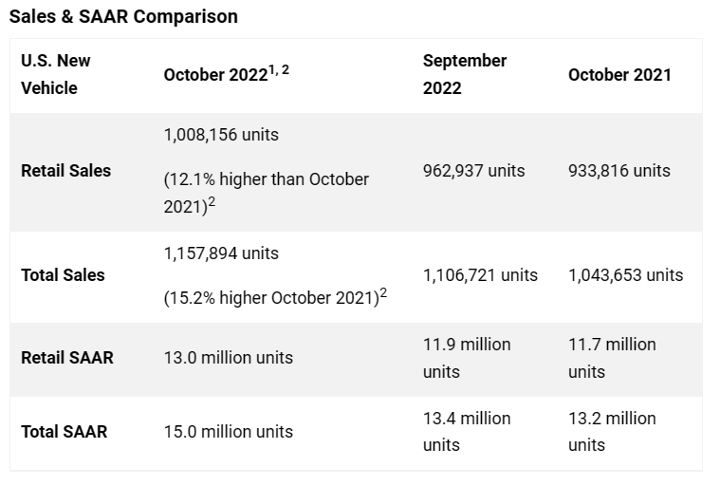 “October results show that new-vehicle inventory levels are experiencing modest improvement with month-end retail units expected to exceed one million units for the first time since May 2021. The result is a retail sales pace that shows a meaningful increase from a year ago but still falls below its potential due to historically lean vehicle availability,” says Thomas King, president of the data and analytics division at J.D. Power.

“As expected, with an increase in supply, several financial indicators are seeing a ‘cooling off’ from the heated growth rates earlier this year – but the industry’s financial health is still positive,” he adds.

“November is the traditional start of the holiday sales event season for the industry. This typically involves a bias towards premium vehicles along with pricing discounts in the form of manufacturer supported lease offers,” King says. “While production has shown some signs of improvement, it most likely will not be enough to bring forward any material sales events. Higher interest rates will continue to compress transaction prices and retailer profit, though overall industry health is still at historically high levels.” 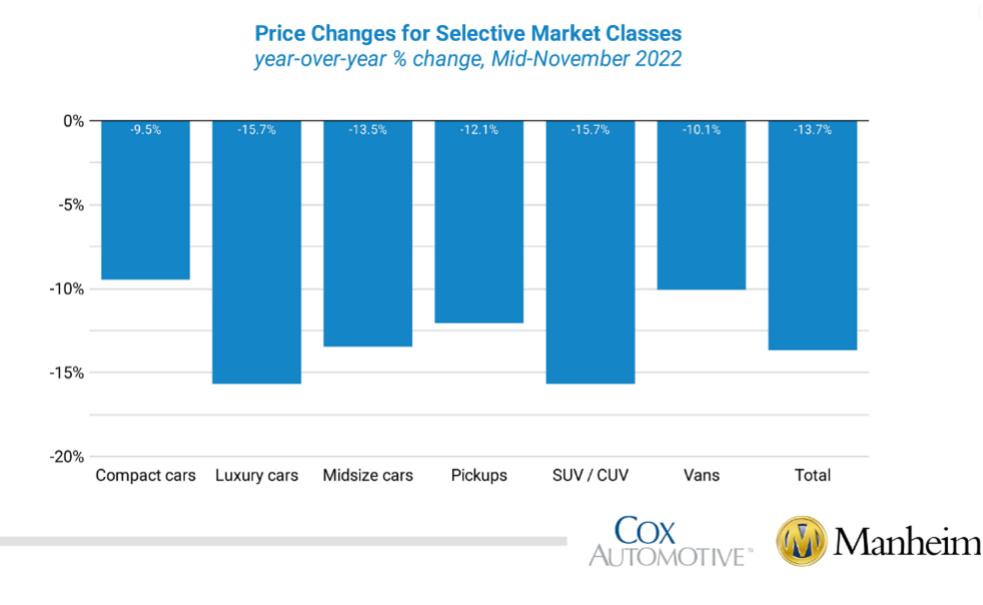 Wholesale used-vehicle prices (on a mix-, mileage- and seasonally adjusted basis) increased 0.4% during the first 15 days of November. The mid-month Manheim Used Vehicle Value Index rose to 200.7 – down 13.7% from the full month of November 2021.

Over the last two weeks, Manheim Market Report (MMR) prices saw “fairly normal declines” for the time of year. This resulted in a 1.1% cumulative decline in the Three-Year-Old MMR Index, which represents the largest model-year cohort at auction.

According to Manheim, all eight major market segments posted seasonally-adjusted prices which were lower year-over-year in the first half of November. Compact cars had the lowest decline at -9.5%, while sports cars, vans, pickups and midsize cars decreased less compared to the overall industry in seasonally adjusted year-over-year changes. Compared to October, five major segments saw price increases, with full-size, luxury and midsize cars lower than the industry. Only sports cars and vans showed unadjusted price increases versus October.