The Conference Board Consumer Confidence Index® increased in October, following declines in the previous three months. The Index now stands at 113.8 (1985=100), up from 109.8 in September. The Present Situation Index – based on consumers’ assessment of current business and labor market conditions – rose from 144.3 to 147.4. The Expectations Index – based on consumers’ short-term outlook for income, business and labor market conditions – improved from 86.7 to 91.3.

“Consumer confidence improved in October, reversing a three-month downward trend as concerns about the spread of the Delta variant eased,” said Lynn Franco, senior director of economic indicators at The Conference Board. “While short-term inflation concerns rose to a 13-year high, the impact on confidence was muted. The proportion of consumers planning to purchase homes, automobiles and major appliances all increased in October – a sign that consumer spending will continue to support economic growth through the final months of 2021. Likewise, nearly half of respondents (47.6%) said they intend to take a vacation within the next six months – the highest level since February 2020, a reflection of the ongoing resurgence in consumers’ willingness to travel and spend on in-person services.” 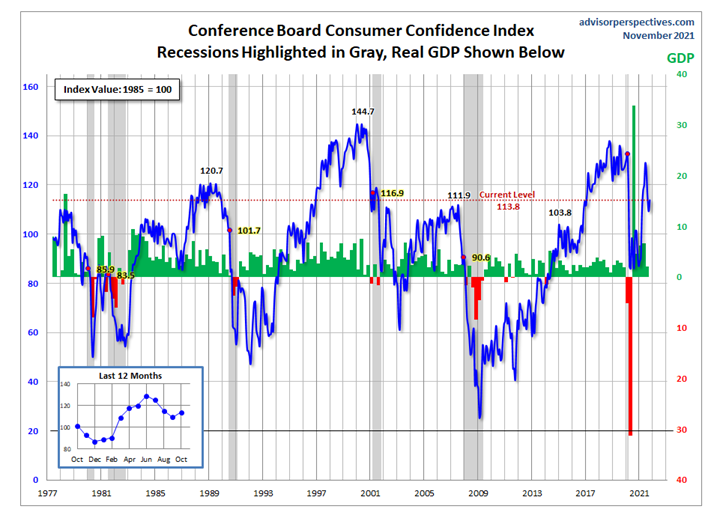 Jill Mislinski of Advisor Perspectives – a leading interactive publisher for Registered Investment Advisors (RIAs), wealth managers and financial advisors – put the recent consumer sentiment report into larger historical context as a coincident indicator of the economy. “Toward this end, we have highlighted recessions and included GDP. The regression through the index data shows the long-term trend and highlights the extreme volatility of this indicator. Statisticians may assign little significance to a regression through this sort of data. But the slope resembles the regression trend for real GDP shown below, and it is a more revealing gauge of relative confidence than the 1985 level of 100 that the Conference Board cites as a point of reference,” she said.

There are significant inconsistencies between The Conference Board Consumer Confidence Index® and The Consumer Sentiment Index, the latter of which is a survey consisting of approximately 50 core questions covering consumers’ assessments of their personal financial situation, buying attitudes and overall economic conditions. While consumer confidence posted an increase in October after three months in decline, consumer sentiment dipped to 71.7, according to the University of Michigan Survey of Consumers.

“The positive impact of higher income expectations and the receding coronavirus has been offset by higher rates of inflation and falling confidence in government economic policies,” said Richard Curtin, chief economist at Survey of Consumers. “Consumers not only anticipated the highest year-ahead inflation rate since 2008 in the October survey, consumers also expressed greater uncertainty about the year-ahead inflation rate than any time in nearly forty years.” 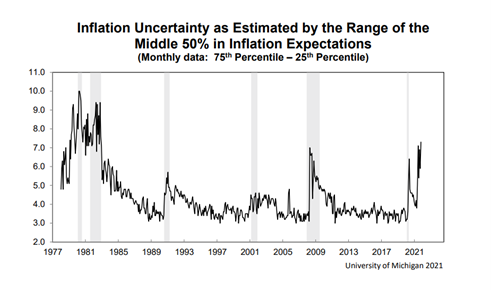 Curtin said the patterns of consumers’ reactions to recent rises in inflation represent the preconditions that can promote an escalating inflation rate during the year ahead.

People understand the origin of inflation has been in the upheavals in supply lines and labor markets, he noted. The acceptance of higher prices, however, was caused by swollen savings due to the record pandemic cash incentives, as well as by Biden’s new social support programs. Now, the declining resistance to price hikes among buyers will be joined by less resistance among sellers to hiking prices that will be justified by higher materials and labor costs.

“These reactions promote an accelerating inflation rate until a tipping point is reached when consumers’ incomes can no longer keep pace with escalating inflation,” Curtin said. “In the past inflationary era, one recession was insufficient to realign expectations; it required a series of boom-bust cycles until the Fed’s Volcker finally defeated inflation by raising interest rates to record levels.” 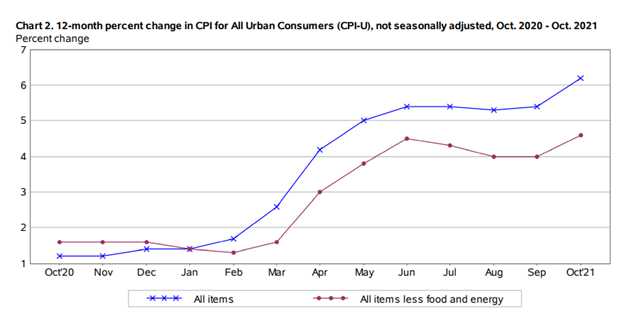 In October, the Consumer Price Index for All Urban Consumers increased .9% on a seasonally adjusted basis after rising .4% in September and .3% in August, according to the U.S. Bureau of Labor Statistics. Over the last 12 months, the all items index increased 6.2% before seasonal adjustment. U.S. consumer prices accelerated at the fastest annual pace in more than 30 years, with prices at the grocery store and pump on most American minds.

Recent research published by David Blanchflower of Dartmouth College and Alex Bryson of the University College London shows consumer expectation indexes from the Conference Board and the University of Michigan often predict economic downturns up to 18 months in advance. If the trend holds true, “clear downward movements in consumer expectations” during the past six months point to the U.S. steering into a recession, according to Blanchflower and Bryson.

While inflation is undisputedly soaring, the hiring situation does not imply an immediate recession. The unemployment rate now sits at 4.6%, and the economy is adding jobs (+531,000 in October, above economists’ predictions of 450,000); however, the U.S. government has played a pivotal role in “propping up the labor market,” according to economists. Time will tell if such numbers are a mirage of recovery through an infusion of federal spending or true economic growth.

Spending has continued at a brisk pace throughout 2021 – up 14.5% year-over-year for the first nine months – and has returned to pre-pandemic levels for many retail categories, noted the National Retail Federation (NRF).

While some households that lost jobs last year are still facing financial difficulties, the company points to data tracked by Harvard University’s Opportunity Insights projects shows total spending by low-income consumers was up 22.3% at the end of this September compared with pre-pandemic January 2020. *However, the number appears to reflect enhanced unemployment benefits and other stimulus money, such as the new child tax credit (advanced payment).

Despite a range of complex challenges – from consumer confidence and sentiment to supply chain woes and beyond – the NRF is betting extra pocket money will overcome an inflationary environment during the holiday shopping season. In 2021, growth is projected between 8.5% – 10.5%. This figure includes online and other non-store sales, which NRF predicts will increase between 11% – 15%.