The Conference Board Consumer Confidence Index® decreased slightly in April, after posting an increase in March. The Index now stands at 107.3 (1985=100), down from 107.6 a month prior. The Present Situation Index – based on consumers’ assessment of current business and labor market conditions – dipped to 152.6 from 153.8 last month. However, the Expectations Index – based on consumers’ short-term outlook for income, business and labor market conditions – ticked up to 77.2 from 76.7.

The Present Situation Index declined but remained favorable, suggesting the economy continued to expand in early Q2. Expectations, while still weak, did not deteriorate further amid high prices, especially at the gas pump and the war in Ukraine, she adds.

“Still, purchasing intentions are down overall from recent levels as interest rates are rising. Meanwhile, concerns about inflation retreated from an all-time high in March but remained elevated. Looking ahead, inflation and the war in Ukraine will continue to pose downside risks to confidence and may further curb consumer spending this year,” says Lynn Franco, senior director of economic indicators at The Conference Board. 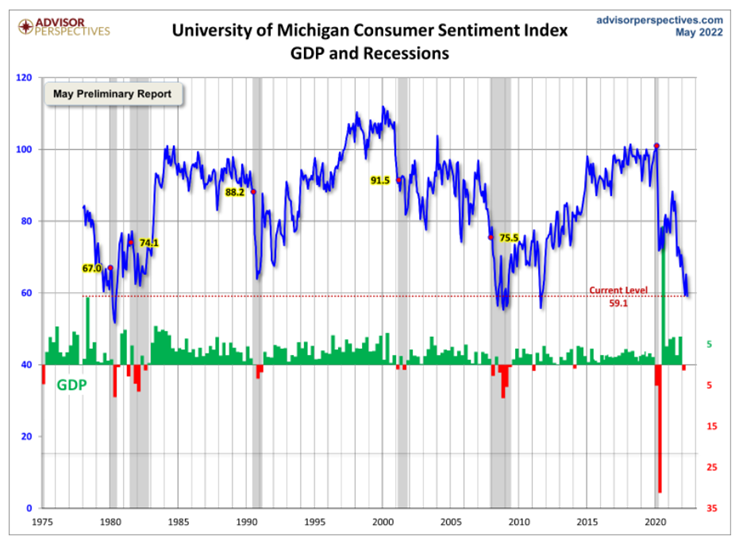 The chart evaluates the historical context for this index as a coincident indicator of the economy. Toward this end, Advisor Perspectives highlighted recessions and included GDP. Since its beginning in 1978, consumer sentiment is 31.1% below the average reading (arithmetic mean) and 30.3% below the geometric mean. The current index level is at the 2nd percentile of the 533 monthly data points in this series.

The Consumer Sentiment Index – a survey consisting of approximately 50 core questions covering consumers’ assessments of their personal financial situation, buying attitudes and overall economic conditions – rose to 65.2 in April, a 9.8% month-over-month increase, according to the University of Michigan Survey of Consumers.

Data shows most of the bump was concentrated in expectations, with gains of 21.6% in the year-ahead outlook for the economy and an 18.3% jump in personal financial expectations. However, the overall impact on sentiment trends was quite small, notes Richard Curtin, chief economist. Aside from the last two months, he says the Sentiment Index in April was still lower than any month in the past decade.

Consumer sentiment is trending down 9.4% compared to April, reversing any realized gains. According to Survey for Consumers, declines are broad-based for current economic conditions, as well as consumer expectations, and visible across income, age, education, geography and political affiliation.

“This continues the general downward trend in sentiment over the past year,” says Curtin. “Consumers’ assessment of their current financial situation relative to a year ago is at its lowest reading since 2013, with 36% of consumers attributing their negative assessment to inflation. Buying conditions for durables reached its lowest reading since the question began appearing on the monthly surveys in 1978, again primarily due to high prices.”

The median expected year-ahead inflation rate is 5.4%, which is relatively unchanged over the last three months, and up 4.6% year-over-year. The mean was considerably higher at 7.4%, reflecting substantial variation in price changes across types of goods, services and in household spending patterns. Meanwhile, Curtin says, long-term inflation expectations remain well-anchored with a median of 3%, settling within the 2.9 to 3.1% range seen over the last 10 months. 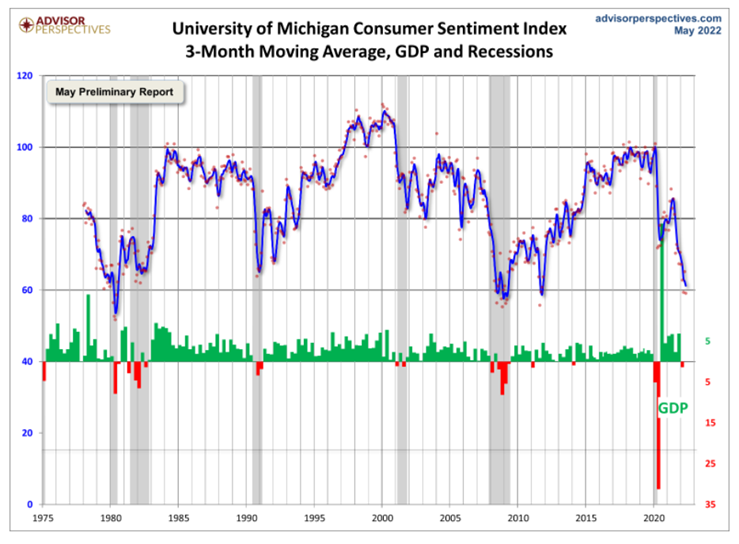 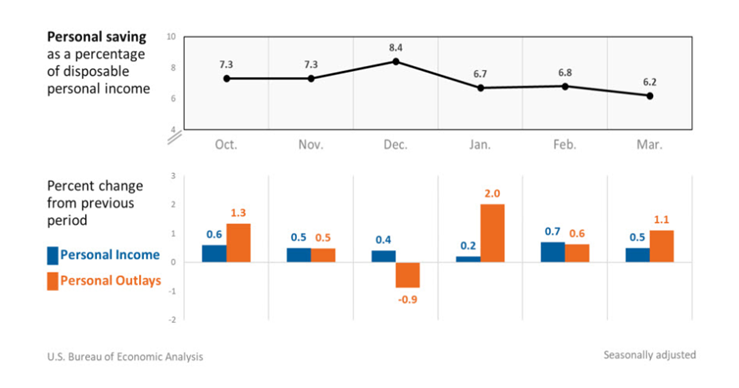