The Consumer Price Index for All Urban Consumers (CPI-U) increased .6% in March on a seasonally adjusted basis after rising .4% in February, according to the U.S. Bureau of Labor Statistics. The most recent reporting is the largest one-month bump since August 2012. Over the last 12 months, the all items index increased 2.6% before seasonal adjustment – a much larger increase compared to 1.7% a month prior. 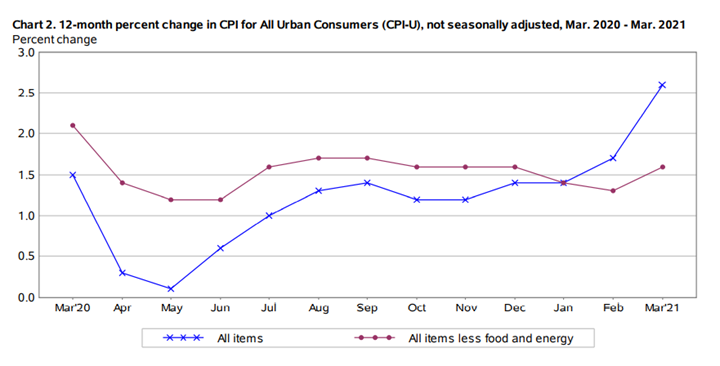 The Consumer Sentiment Index—a survey consisting of approximately 50 core questions that cover consumers’ assessments of their personal financial situation, buying attitudes and overall economic conditions—finished at 88.3 in April, according to University of Michigan Survey of Consumers.

Positive consumer confidence is being linked to “record federal stimulus spending, both recently passed and proposed, as well as the positive impact from a growing share of the population who are vaccinated,” according to Richard Curtin, chief economist for the Survey of Consumers.

Additionally, the largest and most important change in April, noted Curtin, was an all-time record number of consumers expecting declines in the unemployment rate during the year ahead.

“Overall, the data indicate an exceptional outlook for consumer spending through mid-2022. The size and persistence of the spending gains depend on continued job growth, as well as wages that effectively draw people back into the labor force,” explained Curtin, who did acknowledge the positive outlook is not without challenges.

“There is an immediate need to fine-tune fiscal and monetary policies that allow inflation to modestly exceed the 2% target for a limited time without contributing to an underlying upward momentum in inflation,” he explained. “While it is critical to first secure robust and equitable economic growth, contingency plans are urgently needed to avoid declining inflation-adjusted incomes and surging interest costs.” 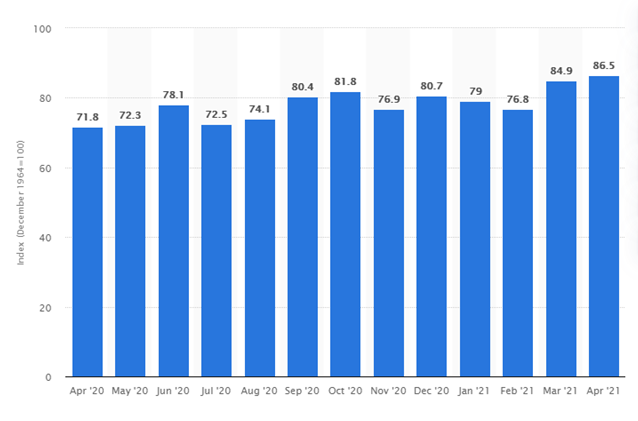 This statistic shows the U.S. Consumer Sentiment Index from April 2020 to April 2021. The index is normalized to have a value of 100 in December 1964 and based on a monthly survey of consumers, conducted in the continental United States. It consists of about 50 core questions, which cover consumers’ assessments of their personal financial situation, their buying attitudes and overall economic conditions. The Consumer Sentiment Index stood at 88.3 in April 2021.

With sentiment on the upswing, The Conference Board Consumer Confidence Index® surged to 121.7 – its highest level since February 2021.

“Consumer confidence has rebounded sharply over the last two months and is now at its highest level since February 2020,” said Lynn Franco, senior director of economic indicators at The Conference Board.

“Consumers’ assessment of current conditions improved significantly in April, suggesting the economic recovery strengthened further in early Q2. Consumers’ optimism about the short-term outlook held steady this month. Consumers were more upbeat about their income prospects, perhaps due to the improving job market and the recent round of stimulus checks. Short-term inflation expectations held steady in April, but remain elevated. Vacation intentions posted a healthy increase, likely boosted by the accelerating vaccine rollout and further loosening of pandemic restrictions,” she added. 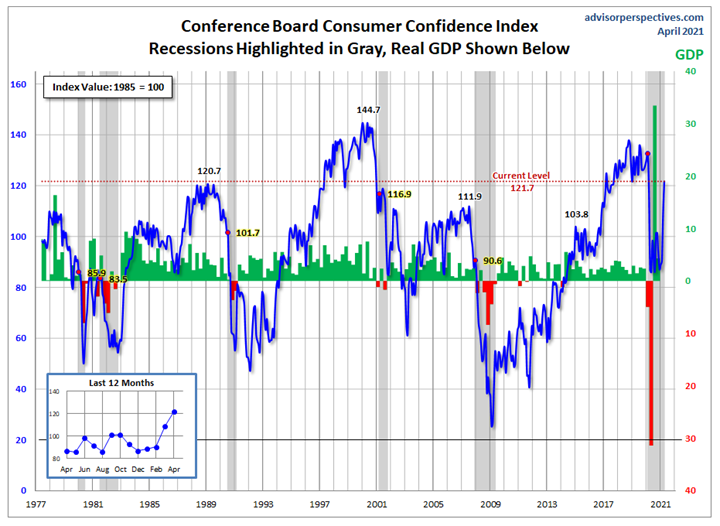 Jill Mislinski of Advisor Perspectives— a leading interactive publisher for Registered Investment Advisors (RIAs), wealth managers and financial advisors—put the recent consumer sentiment report into larger historical context as a coincident indicator of the economy. “The chart is an attempt to evaluate the historical context for this index as a coincident indicator of the economy. Toward this end, we have highlighted recessions and included GDP. The regression through the index data shows the long-term trend and highlights the extreme volatility of this indicator. Statisticians may assign little significance to a regression through this sort of data. But the slope resembles the regression trend for real GDP shown below, and it is a more revealing gauge of relative confidence than the 1985 level of 100 that the Conference Board cites as a point of reference,” she explained. 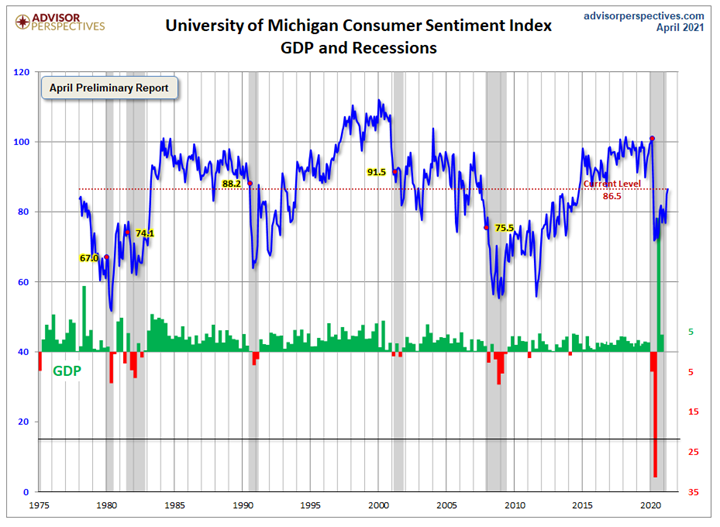 This is a long-term perspective on this widely-watched indicator. Recessions and real GDP are included to help evaluate the correlation between the Michigan Consumer Sentiment Index and the broader economy, according to Advisor Perspectives. 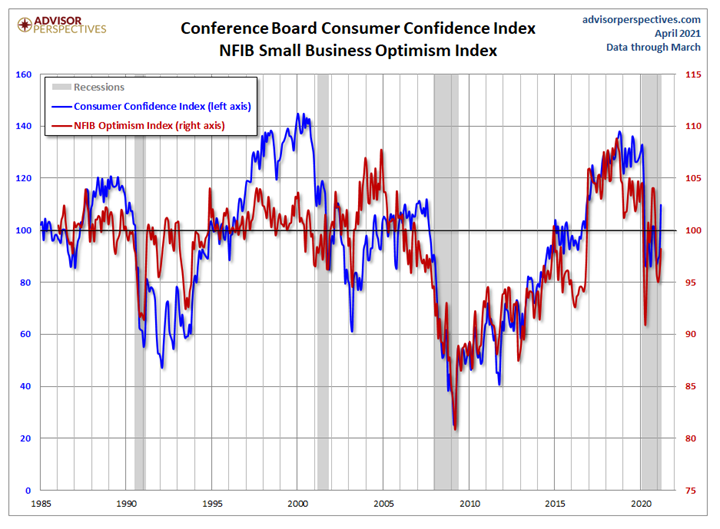 The prevailing mood of the Michigan survey is presented alongside the mood of small business owners, as captured by the NFIB Business Optimism Index (monthly update here). “As the chart illustrates, the two have tracked one another fairly closely since the onset of the Financial Crisis, although a spread appears infrequently, with the most recent spread showing up 2015 through present,” said Mislinski.

Consumer spending is expected to remain strong through 2021. “Although there have been some recent issues related to vaccines, consumer confidence remains high and an optimistic outlook for the future continues to grow. Retailers remain committed, transparent and emphatic about prioritizing customer and employee safety as they welcome shoppers back into their stores this spring,” added Shay.

In fact, with more businesses reopening and bringing employees back to work, the U.S. economy is on firm footing, with its sights set on the fastest growth in more than three decades, said Jack Kleinhenz, NRF chief economist. 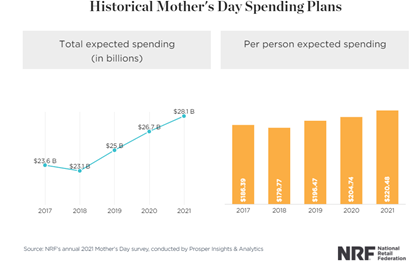 There is a lot of consumer optimism surrounding Mother’s Day, noted Shay. Spending is expected to hit a record $28.1 billion this year, up $1.4 billion from 2020, according to the annual survey released by the National Retail Federation. Approximately 83% of U.S. adults are expected to celebrate the annual holiday.