The Consumer Price Index for All Urban Consumers (CPI-U) increased .8% in February on a seasonally adjusted basis after rising .6% in January, according to the U.S. Bureau of Labor Statistics. The all-items index increased 7.9% before seasonal adjustment over the past 12 months – the largest increase since January 1982.

Key Takeaways, Courtesy of the U.S. Bureau of Labor Statistics:

“I don’t want to make a prediction exactly as to what’s going to happen in the second half of the year, but we’re likely to see another year in which 12-month inflation numbers remain very uncomfortably high,” says Treasury Secretary Janet Yellen.

As a result, Goldman Sachs analysts downgraded their U.S. economic growth forecasts in 2022 – cutting annualized growth to 2.9% against a previous expectation of 3.1%. In addition, the investment bank expects fourth quarter real gross domestic product growth of 1.75% against a previous forecast of 2%.

Total nonfarm payroll employment rose by 678,000 in February and the unemployment rate declined to 3.8%, topping economists’ forecasts for a second straight month.

“This is an economy that has learned to manage very well through uncertainty,” says Robert Rosener, senior U.S. economist with Morgan Stanley. “We’ve continually been surprised by the resilience of the U.S. labor market.” 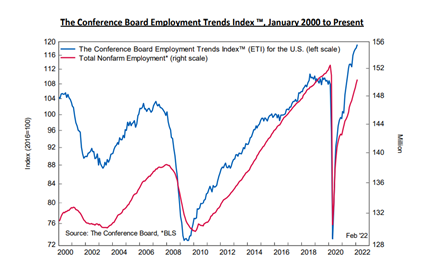 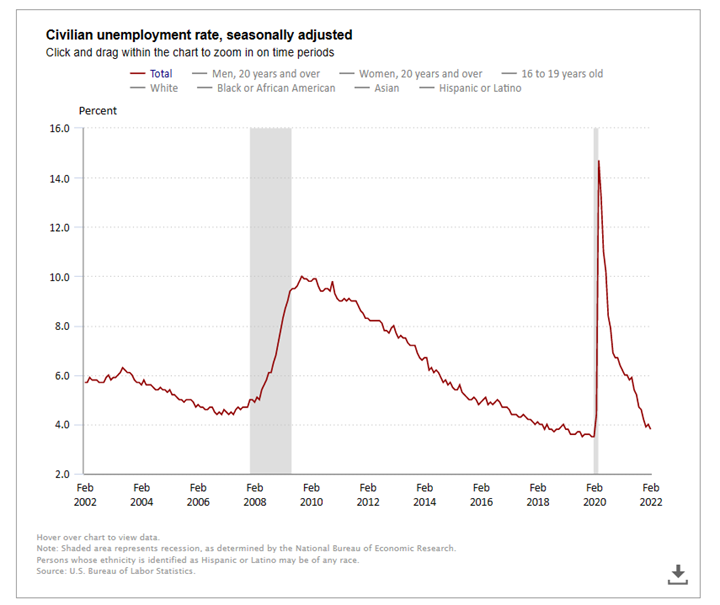 Job growth was widespread during February – led by gains in leisure and hospitality, professional and business services, health care and construction. So far, the economy added more than one million jobs in 2022.

“However, some moderation in job growth is likely in the months ahead – we are now further into the recovery and economic growth rates are projected to decelerate compared to an especially strong 2021. Still, with the labor market being short 2.1 million jobs, returning to pre-pandemic employment levels is likely in 2022,” says Frank Steemers, senior economist at The Conference Board.

“Hiring and retention continue to pose major challenges, which we don’t expect to dissipate in the foreseeable future. In such a tight labor market, wage growth will likely remain elevated. In particular, workers in in-person services, such as restaurants, personal care, and hotels, are now benefitting from a tight labor market,” he adds.