Global Light Vehicle (LV) sales crossed the finish line at 81.3 million units in 2021. Despite a 5% year-over-year increase, the global market remains down 10% compared to 2019.

The new year started on a positive note, with volume in China up 4.6%. Some markets across Europe also posted strong improvement, including Germany and the UK. While the selling rate improved to 84 million units per year at the start of 2022, February is expected to drop 1.8% year-over-year – pulling the forecast to 77.4 million units. The Russian invasion of Ukraine will negatively affect the close of the month and add another layer of substantial risk to the recovery in 2022, according to LMC Automotive.

“An already tight supply of vehicles and high prices across the globe will be under added pressure based on the severity and duration of the conflict in Ukraine. Rising oil and aluminum prices will likely affect consumers’ willingness and ability to purchase vehicles, even if inventory improves,” explains Jeff Schuster, president of Americas operations and global vehicle forecasts at LMC Automotive. “We have made significant downgrades to the Ukraine and Russia forecasts due to the escalating conflict between the two and the repercussions associated with sanctions against Russia. The decline in Europe has pulled the outlook for global light-vehicle sales down by 400,000 units to 85.8 million units. Volume still is expected to increase 5% from 2021, but short-term risk has been escalated beyond the pandemic,” he adds. 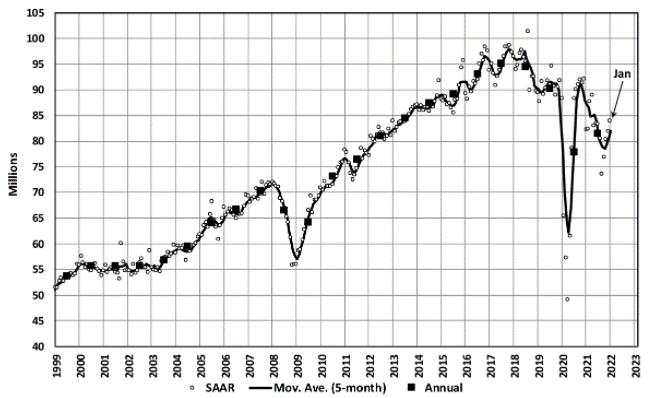 The February Manufacturing PMI® registered 58.6%, an increase of one percentage point from the January reading of 57.6%, according to supply executives in the latest Manufacturing ISM® Report On Business®. 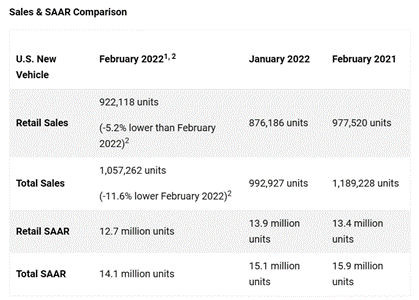 New vehicle retail sales are expected to decline year-over-year in February 2022, according to a joint forecast from J.D. Power and LMC Automotive.

Total new vehicle sales in February, including retail and non-retail transactions, are projected to reach 1,057,300 units – an 11.1% year-over-year decrease.

“With retail inventory on pace to finish a fourth consecutive month below 900,000 units and ninth consecutive month below one million units, the new-vehicle supply situation is not displaying signs of near-term improvement,” says Thomas King, president of the data and analytics division at J.D. Power. Therefore, sales in February are being determined by the number of vehicles delivered to dealerships rather than reflecting actual consumer demand.”

“What we’re seeing in February – sales being constrained by available inventory – is expected to continue in March. The underlying question is which manufacturers will have the ability to produce enough vehicles to increase inventory levels. Ongoing supply chain disruptions, along with near-term announcements of production outages by several manufacturers, mean that the aggregate inventory situation is unlikely to change in March. For some manufacturers, the situation may deteriorate. This likely means that prices and per-unit profitability for retailers and manufacturers will likely remain healthy,” explains King.

“Record new-vehicle prices are being supported by exceptionally strong used-vehicle prices, as new-vehicle buyers benefit from more equity on their trade-in vehicles. The average trade-in equity for February is trending towards $9,663, a 93% increase of $4,657 from a year ago,” adds King. 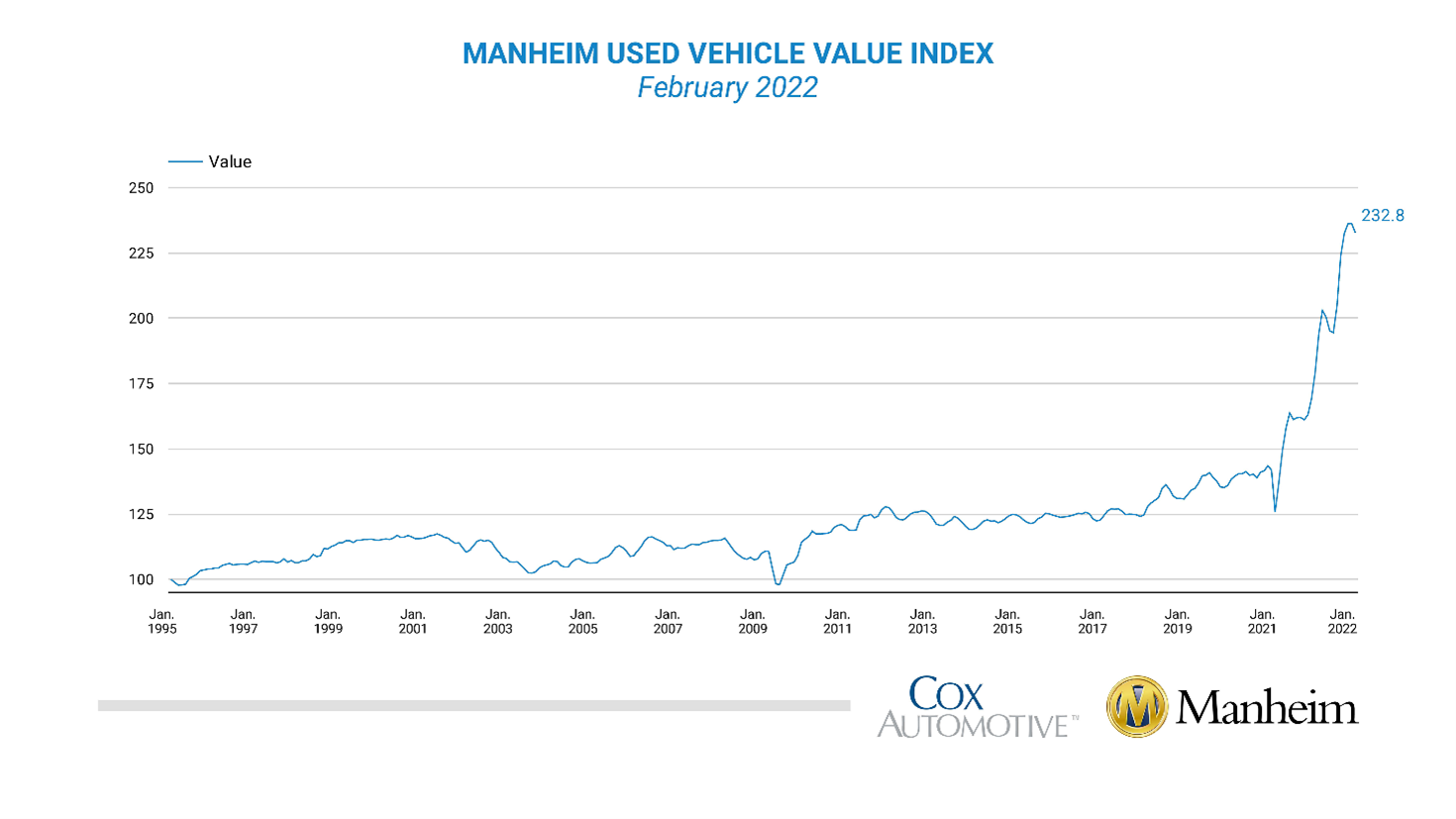 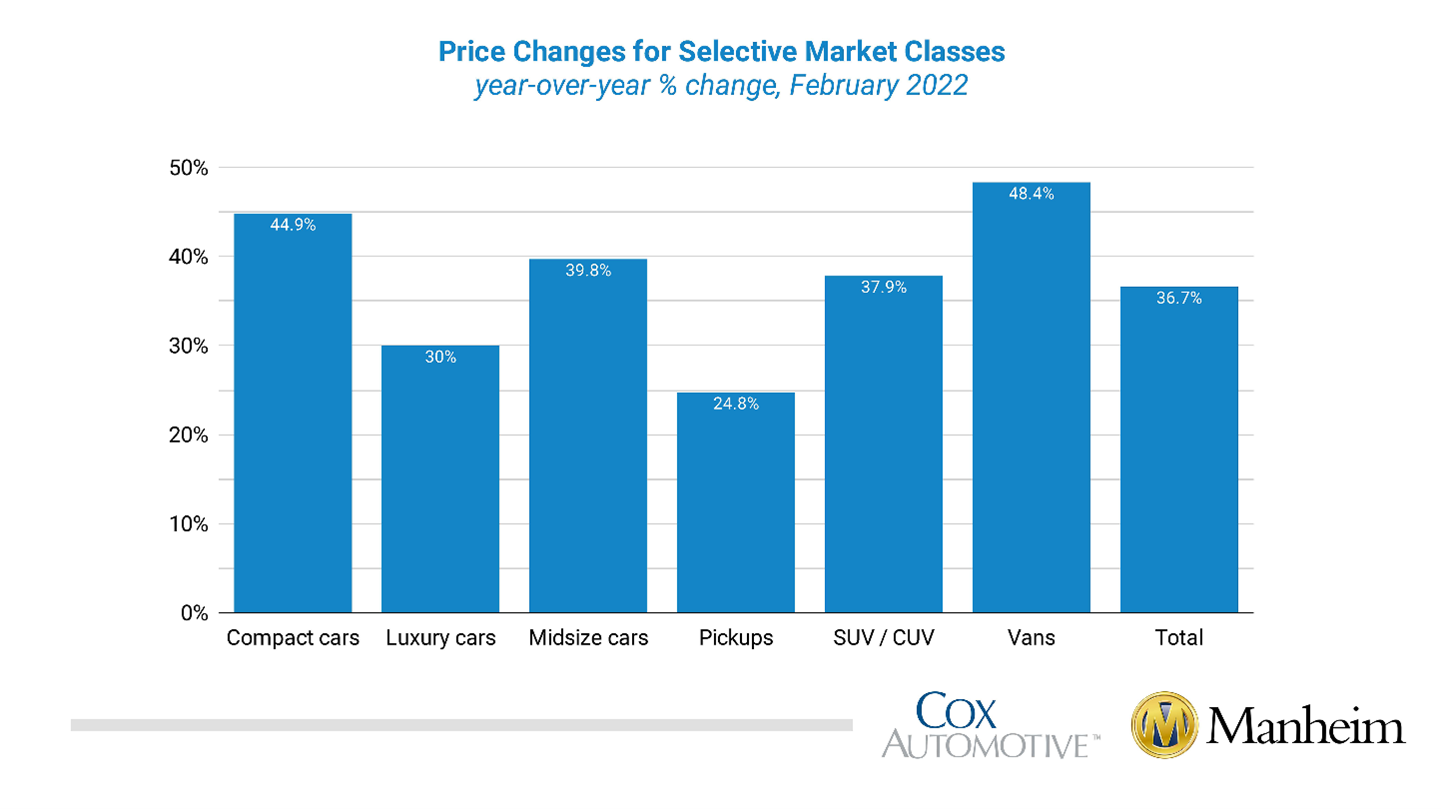 According to Manheim, total new light-vehicle sales were down 12% year-over-year, with the same number of selling days compared to February 2021. By volume, February new-vehicle sales were up 6% over January. The February SAAR came in at 14.1 million, an 11% decline from last year’s 15.9 million and down 6% from January’s 15 million pace.