Global Light Vehicle (LV) sales crossed the finish line at 81.3 million units in 2021. Despite a 5% year-over-year increase, the global market remains down 10% compared to 2019.

“The start of 2022 faces risk from a multitude of drivers that have been affecting the market for several months, such as the Omicron variant, supply chain shortages and global inflation. The addition of geo-political concerns with a potential Russia-Ukraine conflict is adding additional economic risk,” says Jeff Schuster, president of Americas operations and global vehicle forecasts at LMC Automotive. “However, we continue to expect the automotive market to weather the short-term risk and improve 6% to 86.2 million units in 2022 on a stabilizing supply of vehicles by year-end, as well as reduced disruption from the pandemic.”

The January Manufacturing PMI® registered 57.6%, a decrease of 1.2 percentage points from the seasonally adjusted December reading of 58.8%, according to supply executives in the latest Manufacturing ISM® Report On Business®.

“The ongoing supply-chain disruption has had ripple effects throughout the global economy, including the specialty-equipment industry,” affirmed Kyle Cheng, SEMA. In fact, he said more than 80% of industry companies reported severe or moderate impacts in 2021 due to production delays, shipping issues and higher prices.

Industry professionals are optimistic that 2022 will be a brighter year. SEMA Market Research projects most pressing issues within the global supply chain should improve in the second half of the year. However, according to the report, prices may remain elevated for longer and likely into 2023. Nevertheless, SEMA reports nearly three-quarters (74%) of industry companies expect sales growth in 2022. 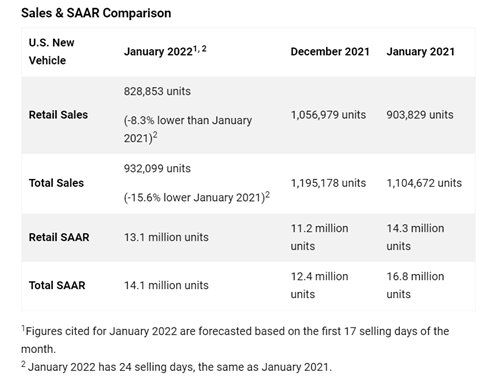 New vehicle retail sales are expected to decline year-over-year in January 2022, according to a joint forecast from J.D. Power and LMC Automotive.

Total new-vehicle sales for January 2022, including retail and non-retail transactions, are projected to reach 932,100 units – a 15.6% year-over-year decline.

“Despite optimism towards the end of 2021 that diminishing supply chain disruption would result in more vehicles being delivered to dealerships, the new vehicle supply situation has shown no meaningful improvement,” says Thomas King, president of the data and analytics division at J.D. Power. “January month-end retail inventory is expected to be below one million units for the eighth consecutive month. The volume of new vehicles being delivered to dealerships in January has been insufficient to meet strong consumer demand, resulting in a significantly diminished sales pace.”

“Although the start of 2022 is disappointing from a sales standpoint, the underlying health metrics of the industry have never been stronger,” says King. “Looking forward to February, the overall industry sales pace will continue to be constrained by procurement, production and distribution and all indications are that deliveries will not rise substantially for the industry in aggregate. This means February will likely be another month of suppressed sales volume offset by near-record level pricing and profitability.”

According to the most current data, Manheim Market Report (MMR) values posted weekly price decreases, which accelerated slightly in the final full week of the month. 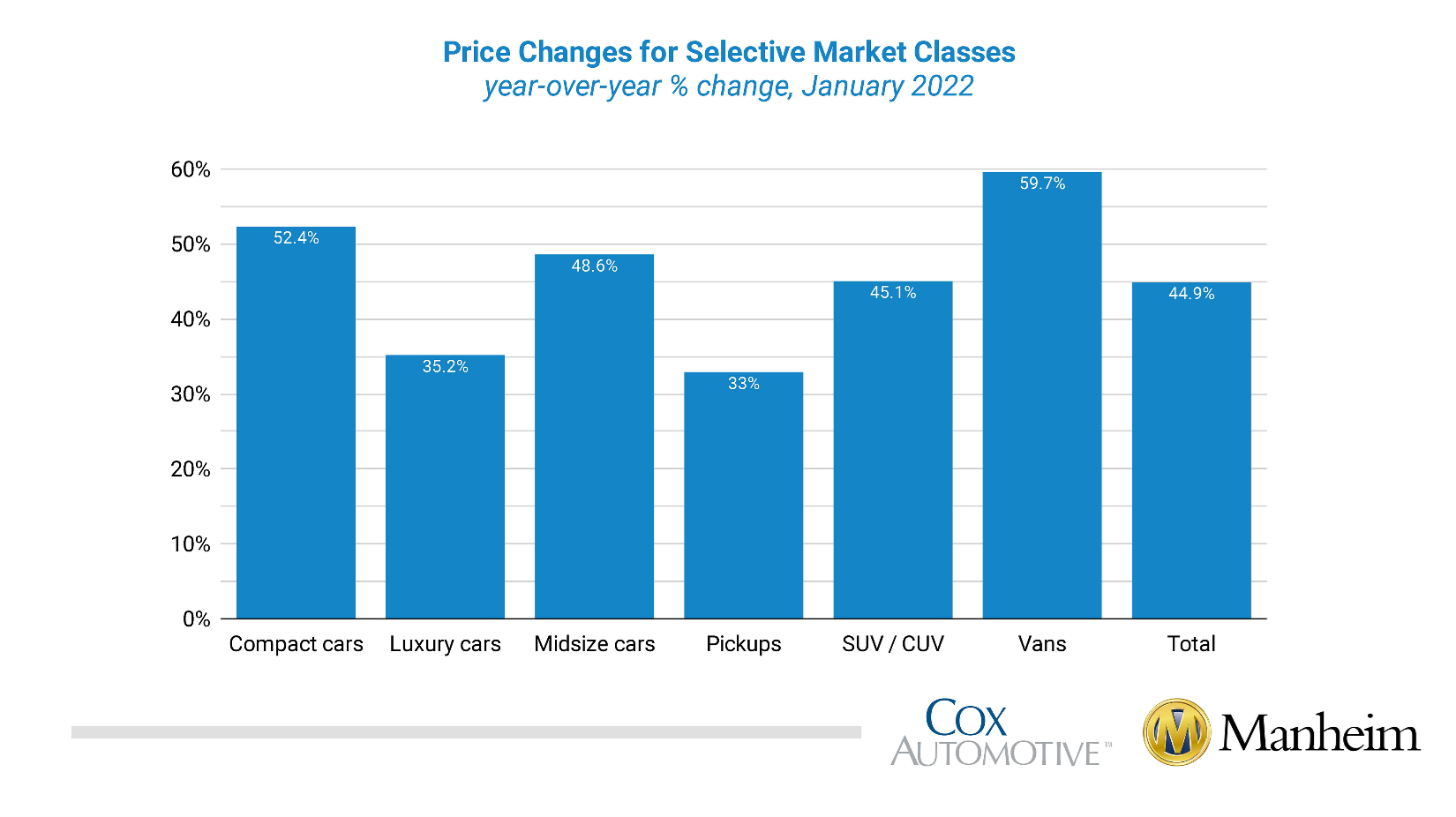 Cox Automotive estimates place total used vehicle sales down .8% year-over-year in January. The used SAAR is forecast at 39 million, a decrease from 39.3 million last January and down from December’s revised 40.8 million SAAR. The January used retail SAAR estimate is 22 million, up from 21.5 million last year but down slightly from 22.3 million in December.