The Conference Board revised its real GDP projection, expecting a 3.5%* (annualized rate) increase during 4Q20 and 2%** in 1Q21. The economy has rebounded partially from a deep contraction in the first half of 2020 due to the pandemic, but a variety of factors will determine how the recovery unfolds in 2021, explained The Conference Board. Key variables include:

Indeed, there are many possible outcomes. However, The Conference Board has generated three potential recovery scenarios based on specific sets of assumptions.

All data and analysis are courtesy of The Conference Board. 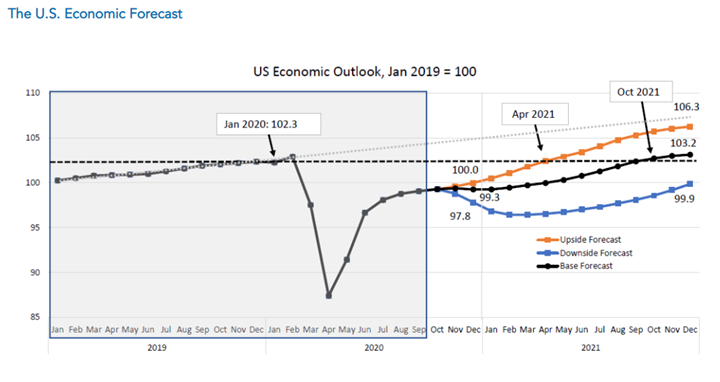 * The Conference Board is adjusting its forecast of 4Q20 real GDP growth from 2.8% (annualized rate) to 3.5% (annualized rate). This upgrade is due to stronger than expected economic indicators in November and December.

** The Conference Board is adjusting its forecast of 1Q21 real GDP growth from .7% (annualized rate) to 2% (annualized rate). This upgrade is in relation to the second round of stimulus that was passed in December, continued progress in the deployment of multiple COVID-19 vaccines and a stronger than expected growth hand-off from 4Q20.

Total nonfarm payroll employment declined by 140,000 in December after increasing 245,000 in November. The unemployment rate remains unchanged from a month prior—6.7%, or approximately 10.7 million people.

“The decline in payroll employment reflects the recent increase in coronavirus (COVID-19) cases and efforts to contain the pandemic,” explained the U.S. Bureau of Labor Statistics. Other takeaways, courtesy of the Bureau’s recent reporting: 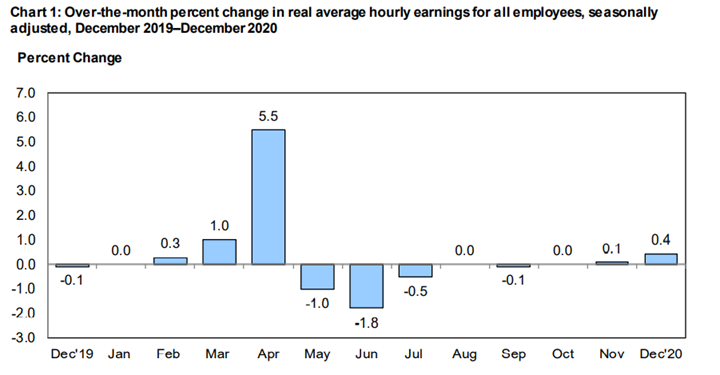 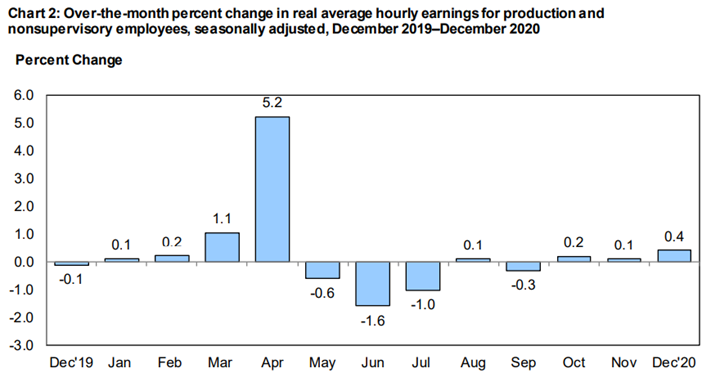 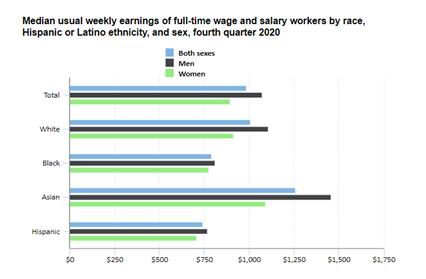 In December, total nonfarm payroll employment declined by 140,000—following an increase of 245,000 a month prior.

Employment declines in leisure and hospitality, private education and government were partially offset by gains in professional and business services, retail trade, construction, as well as transportation and warehousing, according to the U.S. Bureau of Labor Statistics. 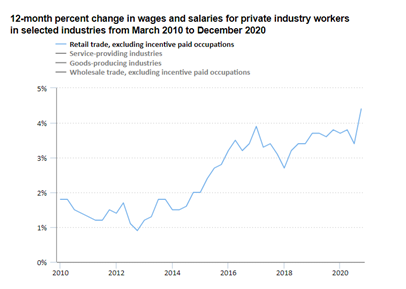 Wages and salaries for private retail trade workers, excluding incentive paid occupations, increased 4.4% for the year ended in December 2020, according to the U.S. Bureau of Labor Statistics. This was higher than the 2.8% increase in wages and salaries for all private industry workers. Read more.

In December, unemployment rates were lower in 19 states, higher in 12 states (+District of Columbia) and stable in 19 states, according to the U.S. Bureau of Labor Statistics. 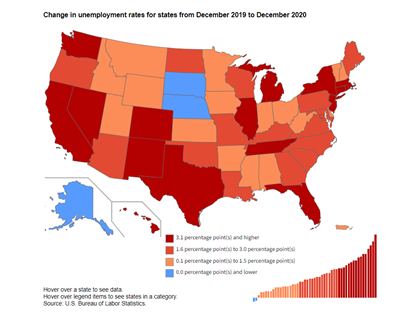 Additionally, 45 states and the District reported jobless rate increases from a year earlier, one state had a decrease and four states had little or no change, per the report.

Hawaii and Nevada posted the highest unemployment rates at 9.3% and 9.2% respectively. Meanwhile, Nebraska and South Dakota reported the lowest rates at 3% percent each. In total, 25 states showed jobless rates lower than the U.S. figure of 6.7%, 10 states (+District of Columbia) had higher rates and 15 states reported rates that were not appreciably different from that of the nation.