The Consumer Price Index for All Urban Consumers (CPI-U) increased .4% in December on a seasonally adjusted basis after rising .2% a month prior, according to the U.S. Bureau of Labor Statistics. Over the last 12 months, the all items index increased 1.4% before seasonal adjustment.

The seasonally adjusted increase in the all items index was driven by an 8.4% increase in the gasoline index, which accounted for more than 60% of the overall increase. The other components of the energy index were mixed, resulting in an increase of 4% for the month. The food index rose in December, as both the food at home and the food away from home indexes increased .4%. 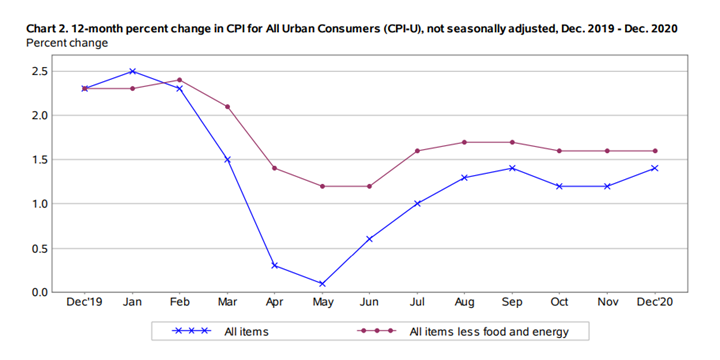 The Consumer Sentiment Index—a survey consisting of approximately 50 core questions that cover consumers’ assessments of their personal financial situation, buying attitudes and overall economic conditions—finished at 79 in January. This is down 1.7 from a month prior and remains well below the average of 97 from 2017 to 2019, according to the University of Michigan Survey of Consumers.

However, “The level of key confidence indicators remained well above prior cyclical lows despite the sudden historic collapse in economic activity,” said Richard Curtin, chief economist for the University of Michigan Survey of Consumers.

Curtin credited mask-wearing and social distancing, the quick substitution of home for office work, as well as the prompt distribution of generous federal benefits for the overall stability of consumers. 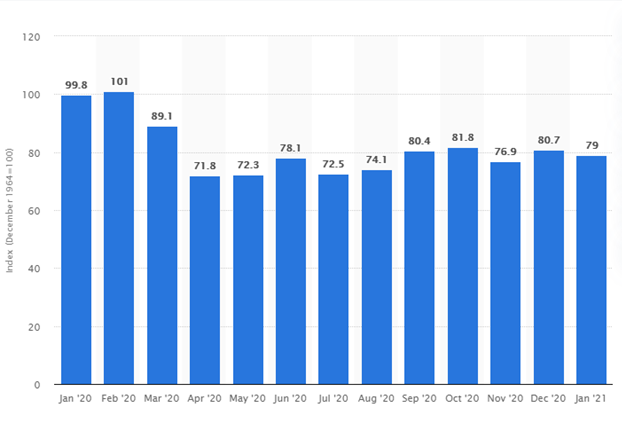 This statistic shows the U.S. Consumer Sentiment Index from January 2020 to January 2021. The index is normalized to have a value of 100 in December 1964 and based on a monthly survey of consumers, conducted in the continental United States. It consists of about 50 core questions that cover consumers’ assessments of their personal financial situation, their buying attitudes and overall economic conditions. The Consumer Sentiment Index stood at 79 in January 2021.

The Conference Board Consumer Confidence Index® improved moderately in January, after decreasing in December. The Index now stands at 89.3 (1985=100), up from 87.1 in December.

“Consumers’ expectations for the economy and jobs, however, advanced further, suggesting that consumers foresee conditions improving in the not-too-distant future. In addition, the percent of consumers who said they intend to purchase a home in the next six months improved, suggesting that the pace of home sales should remain robust in early 2021.” 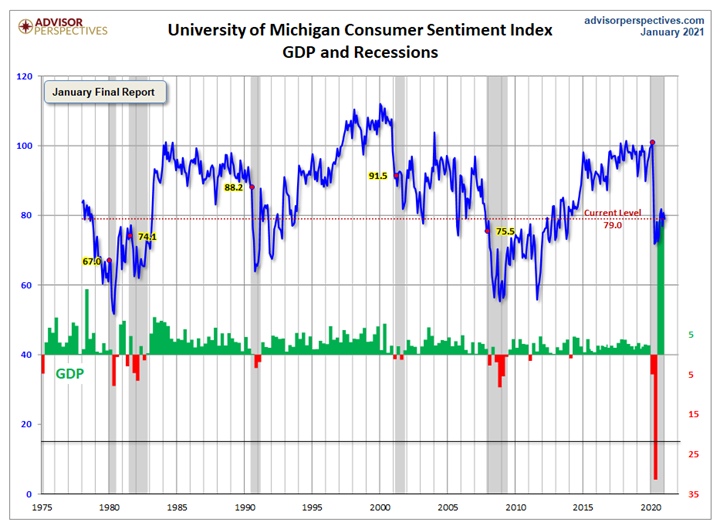 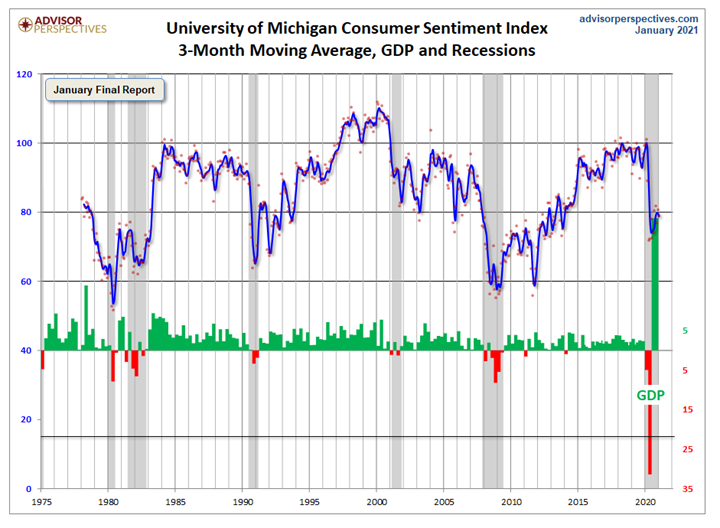 Jill Mislinski of Advisor Perspectives put the recent consumer sentiment report into a larger historical context. Consumer sentiment is 8.3% above the average reading (arithmetic mean) and 7.3% below the geometric mean. The current index level is at the 29th percentile of the 517 monthly data points in this series. Note that this indicator is somewhat volatile, with a 3.0-point absolute average monthly change. The latest data point saw a 4.5-point decrease from the previous month. For a visual sense of the volatility, here is a chart with the monthly data and a three-month moving average. 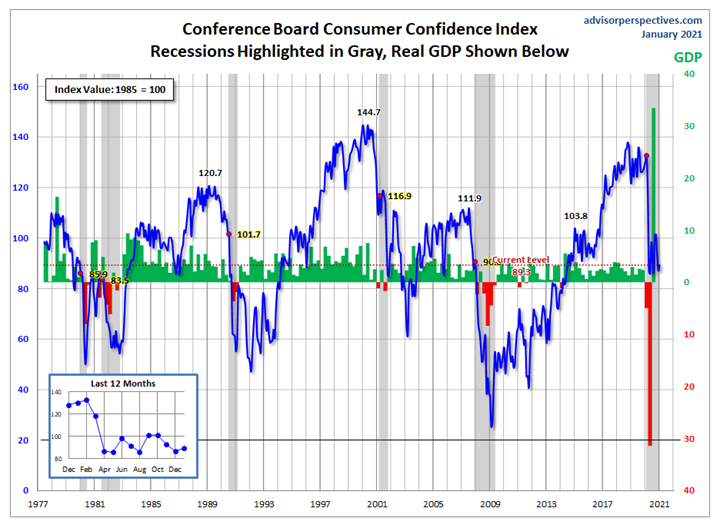 For the sake of comparison, here is a chart of the Conference Board’s Consumer Confidence Index (monthly update here). The Conference Board Index is the more volatile of the two, but the broad pattern and general trends have been remarkably similar to the Michigan Index. 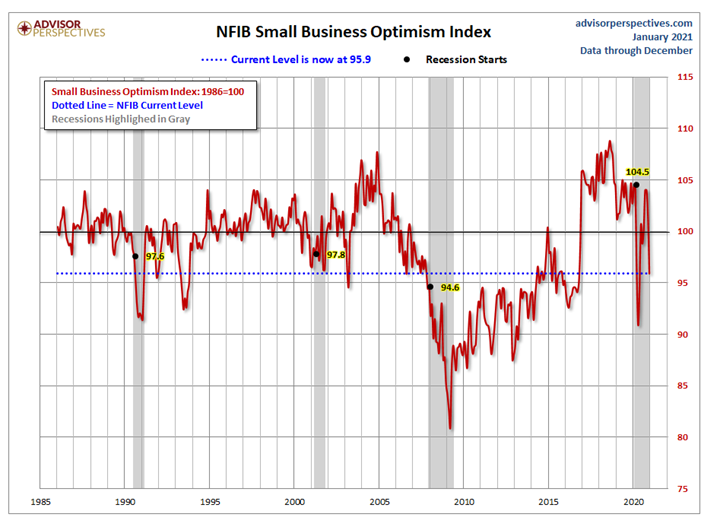 Even though retail sales posted a slight monthly decline, holiday sales were solid. As reported in the December Key Performance Indicator Report, the National Retail Federation (NRF) predicted holiday sales to increase approximately 3.6% – 5.2% year-over-year or a total of $755.3 billion to $766.7 billion. However, final calculations—which include online and other non-store sales, up 23.9% collectively—show unexpected growth of 8%, thereby exceeding the National Retail Federation’s holiday forecast.

“Faced with the rising transmission of the virus, state restrictions on retailers and heightened political and economic uncertainty, consumers chose to spend on gifts that lifted the spirits of their families and friends and provided a sense of normalcy given the challenging year. We believe President-elect Biden’s stimulus proposal, with direct payments to families and individuals, further aid for small businesses and tools to keep businesses open, will keep the economy growing,” he added. 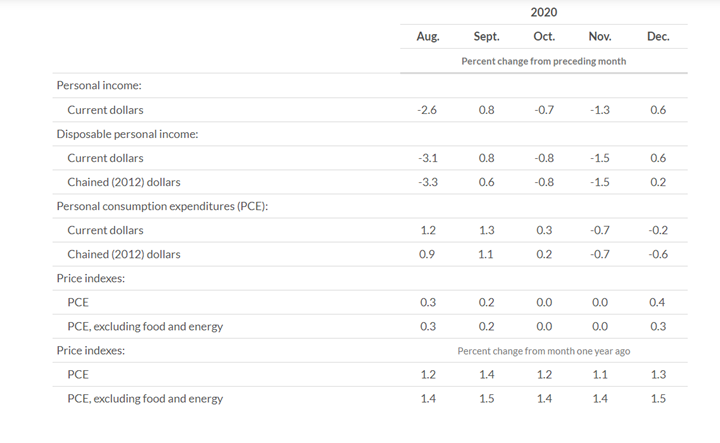 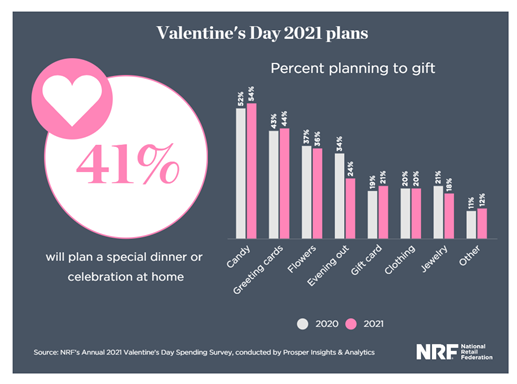 NRF has high hopes for February, too. Nearly 52% of U.S. adults plan to celebrate Valentine’s Day this year— spending a total of $21.8 billion, according to the annual survey released today by the National Retail Federation and Prosper Insights & Analytics.

“Consumers still feel it’s important to spoil their loved ones in light of the pandemic,” Prosper Insights Executive Vice President of Strategy Phil Rist said. “This year’s total and average spending figures are near record highs, as the second-highest in the survey’s history.”

Outlook: Are the increasingly upbeat economic forecasts for 2021 warranted? “Many argue that record levels of fiscal support, along with the ultra-accommodative stance of monetary authorities, have primed the U.S. economy for a strong surge in consumer spending later this year,” said Vivekanand Jayakumar, an associate professor of economics at the University of Tampa.

However, there are “distributional concerns and sector differences that may affect the overall pace and direction of consumer spending in 2021,” he explained. Learn more here. 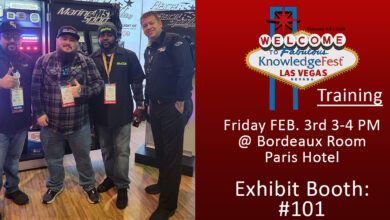 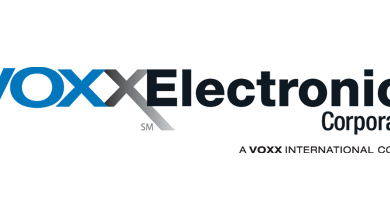