The Conference Board Consumer Confidence Index® declined abruptly in March, following an increase in February. The Index now stands at 120.0 (1985=100), which is down from 132.6 a month prior. “Consumer confidence declined sharply in March due to a deterioration in the short-term outlook,” said Lynn Franco, Senior Director of Economic Indicators at The Conference Board. “The Present Situation Index remained relatively strong, reflective of an economy that was on solid footing, and prior to the recent surge in unemployment claims. However, the intensification of COVID-19 and extreme volatility in the financial markets have increased uncertainty about the outlook for the economy and jobs. March’s decline in confidence is more in line with a severe contraction—rather than a temporary shock—and further declines are sure to follow.” Important takeaways from the current Conference Board Consumer Confidence Index include:

• Consumers’ assessment of current conditions was less favorable during March. The percentage of consumers claiming business conditions are “good” was relatively unchanged at 39.6%, while those claiming business conditions are “bad” increased from 10.8% to 11.4%. Consumers’ assessment of the job market also moderated from last month. Those saying jobs are “plentiful” decreased from 46.5% to 44.9%, while those claiming jobs are “hard to get” was unchanged at 13.9%.

Below is a synopsis of relevant consumer-level details, including the current Consumer Price Index, retail impact and overall consumer sentiment.

The Consumer Price Index for All Urban Consumers (CPI-U) declined 0.4% during March. It was the largest monthly decline since January 2015, reported the U.S. Bureau of Labor Statistics. Despite the decline, however, the all items index increased 1.5% before seasonal adjustment over the past 12 months. Other important takeaways, courtesy of the Bureau:

• A sharp decline in the gasoline index was a major cause of the monthly decrease in the seasonally adjusted all items index, with decreases in the indexes for airline fares, lodging away from home and apparel also contributing.

• The index for all items less food and energy fell 0.1% during March, its first monthly decline since January 2010. Along with the indexes for airline fares, lodging away from home and apparel, the index for new vehicles declined during this period as well.

• The index for shelter was unchanged, with increases in the indexes for rent and for owners’ equivalent rent offsetting the aforementioned decline in the index for lodging away from home.

This represents the largest month-to-month decline in US retail sales since the government began tracking the data in 1992, according to CNBC. “And the decrease in spending appears to be impacting the financial services industry too, considering JPMorgan Chase and Wells Fargo reported drops in card transactions in Q1 2020,” added Business Insider.

Conversely, total sales for January 2020 through March 2020 were up 1.1% (±0.5 percent) compared to the same period a year ago. While the overall performance of retail dropped, damaging several product categories, some segments experienced a surge in sales due to the pandemic.

U.S. retail data is likely to continue decreasing in coming months, as shelter-in-place orders did not go into full effect until mid-March. The peak of COVID-19 may be behind us shortly, but the economic impact is just beginning. 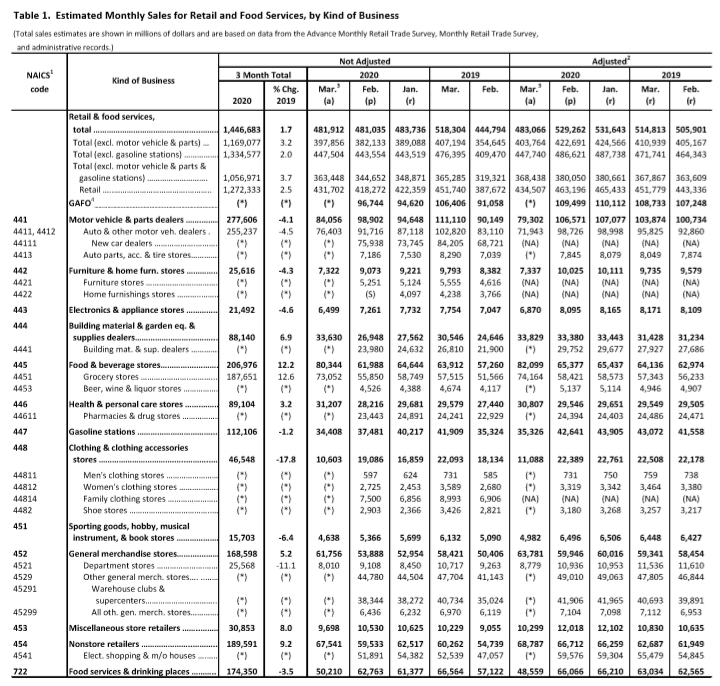 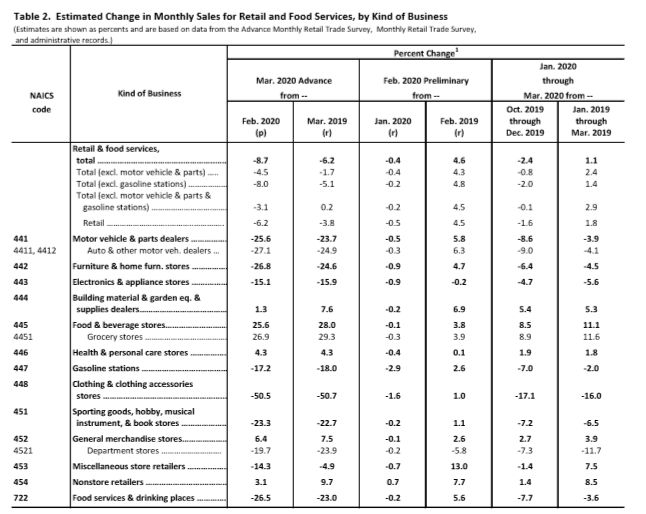 Preliminary consumer sentiment data for April registered at 71.0, its lowest since 2011 and the largest monthly decline in its history, according to University of Michigan data. 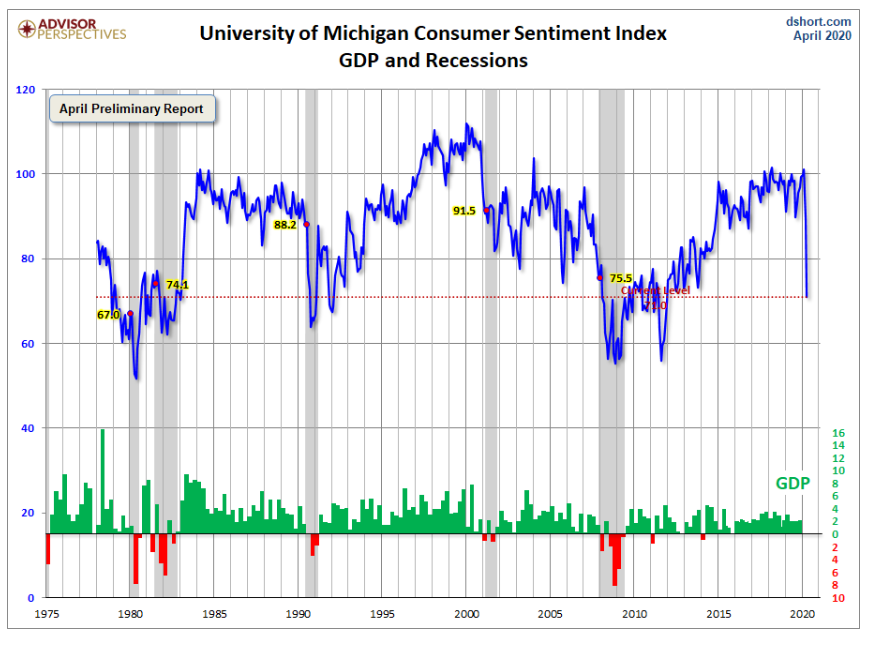 According to the most recent report, “When combined with last month’s decline, the two-month drop of 30.0 Index-points was 50% larger than the prior record. Of the two Index components, the Current Conditions Index plunged by 31.3 Index-points, nearly twice the prior record decline of 16.6 points set in October 2008. In contrast, the Expectations Index fell by 9.7 points, a substantial decline, but not nearly as steep as the record 16.5-point drop in December of 1980. This suggests that the free-fall in confidence would have been worse were it not for the expectation that the infection and death rates from COVID-19 would soon peak and allow the economy to restart,” said Richard Curtin, Surveys of Consumers chief economist.

Jill Mislinski of Advisor Perspectives, a leading interactive publisher for Registered Investment Advisors (RIAs), wealth managers and financial advisors, puts the report into a larger historical context—stating since its beginning in 1978, consumer sentiment is 17.8% below the average reading (arithmetic mean) and 16.8% below the geometric mean. 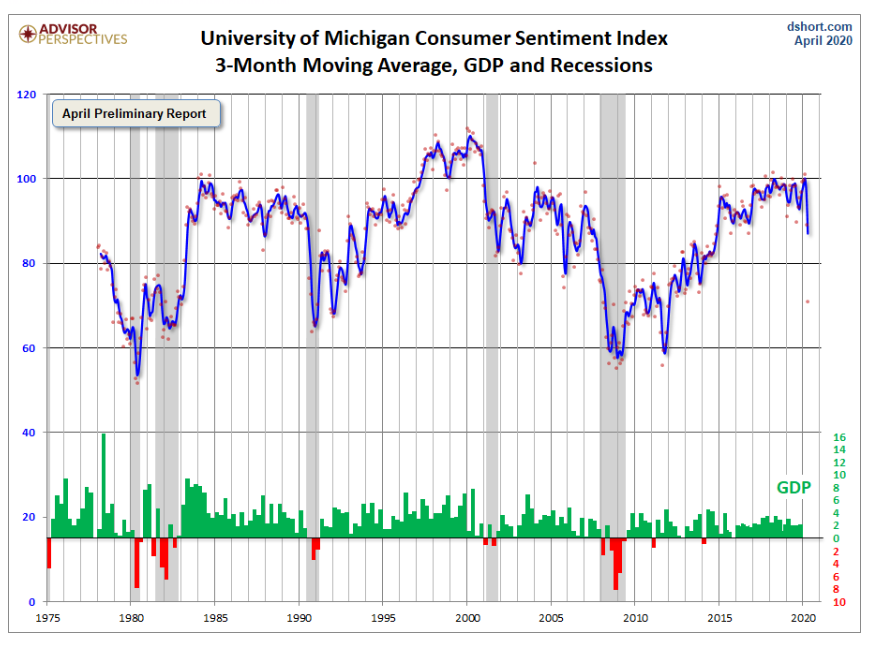 “The full restoration of consumer confidence will be more difficult and will take longer to complete than following any other recession since the Great Depression. While the collapse in confidence reflects assessments of personal finances and the national economy, the primary cause of the crash in confidence was the coronavirus rather than some economic event. Correspondingly, the first glimmer of the restoration in confidence will not be due to an improving economy, but when consumers become convinced the spread of COVID-19 has been effectively contained,” explained Mislinski 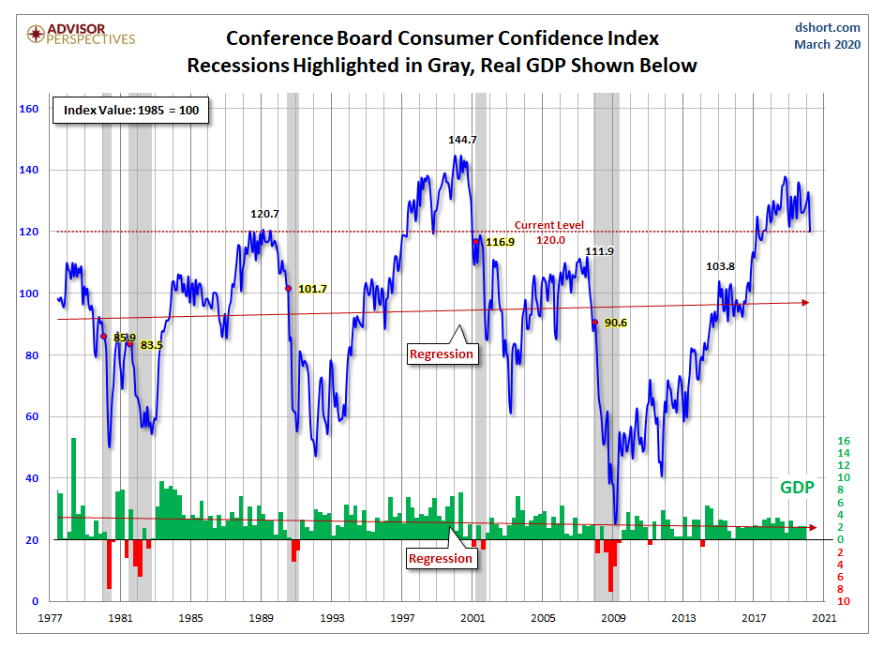 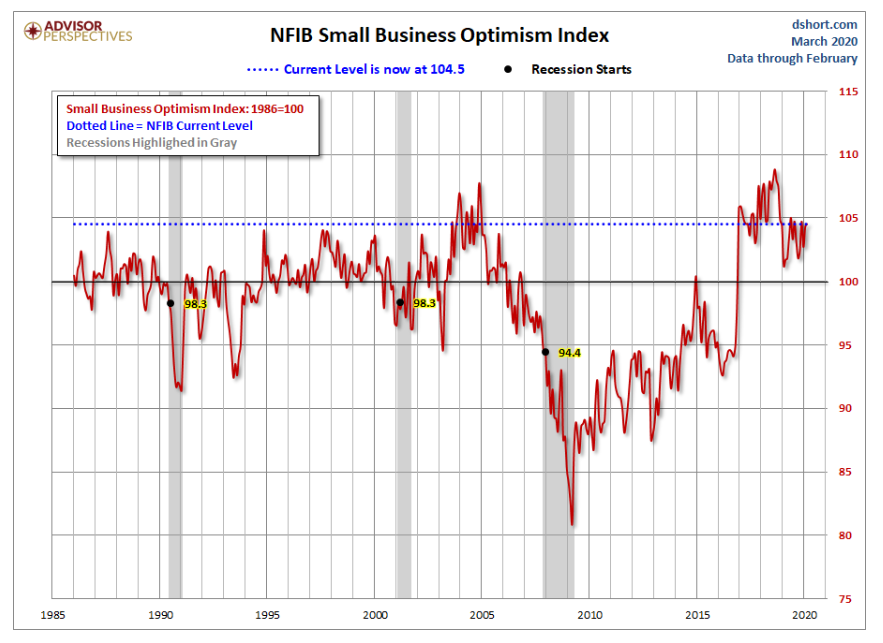 An excerpt from the Restoring Consumer Confidence report sums up the current state of consumer sentiment—echoing thoughts, fears, questions and emotions everyone is experiencing at some level. The content below is fully credited to Richard Curtin, Surveys of Consumers chief economist. 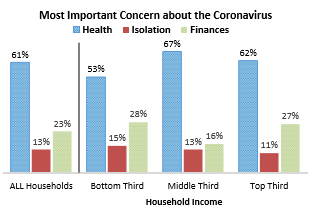 Regardless of official announcements made by state or federal agencies, individual consumers will form their own judgements about the risks of the COVID-19 virus to themselves, their families, friends and their communities. There will be no national consensus, nor a uniform restart of the economy. Consumers’ judgements will be based on science, experience and emotion.

Although recessions are notorious for reshaping economies, this downturn will entail many more changes in the makeup of the business sector as well as the working, spending and shopping habits of consumers.

Even after the economy begins to reopen, the coronavirus will continue to shape the recovery in consumer confidence. Unlike past recoveries, the anticipated recovery in consumer confidence will be contingent on progress on both fronts. While there may be a misstep in economic policy, the greatest risk would be if there was a resurgence in infections following the reopening of the economy, or following an easing in some critical distancing or travel regulations. It may only take a resurgence in one locale to prompt consumers from other areas, or even nationwide, to believe the relaxation occurred too soon.

The pandemic will end with a vaccine, but the scares from the economic devastation will remain part of family lore long into the decades ahead as did the wounds of the Great Depression.