Total nonfarm payroll employment fell by 701,000 in March while the unemployment rate rose to 4.4%, according to the Bureau of Labor Statistics. The unemployment rate increase of 0.9 percentage point stands as the largest month-over-month increase since January 1975, and is reflective of the pandemic and efforts to contain it properly.

“National initial jobless claims jumped to 6.6 million for the week ending March 28. This was double the prior week’s record volume of 3.3 million. We will likely see a few more weeks of large new claims numbers, and we could see unemployment reach 10%–16% as a result. The U.S. lost more jobs in the last two full weeks of March than we did for the entire duration of the Great Recession,” said Manheim. “The extent of business closures, declining consumer confidence, and job and income losses point to the U.S. and most of the world heading into a recession quickly. The economic contraction in March and Q2 could be worse than at any point since WWII. The range of likely GDP real contraction for Q2 is from -10% to -18%,” continued Manheim.

Unemployment at the State Level

Unemployment rates were higher during March in 29 states and the District of Columbia, lower in three states and stable in 18 states, according to the Bureau of Labor Statistics. North Dakota had the lowest unemployment rate in March at 2.2%, while Louisiana had the highest rate of 6.9%. The rates in Alaska (5.6%) and Idaho (2.6%) set new series lows. In total, 25 states had unemployment rates lower than the U.S. figure of 4.4%, 13 states and the District of Columbia had higher rates and 12 states had rates that were not appreciably different from that of the nation. 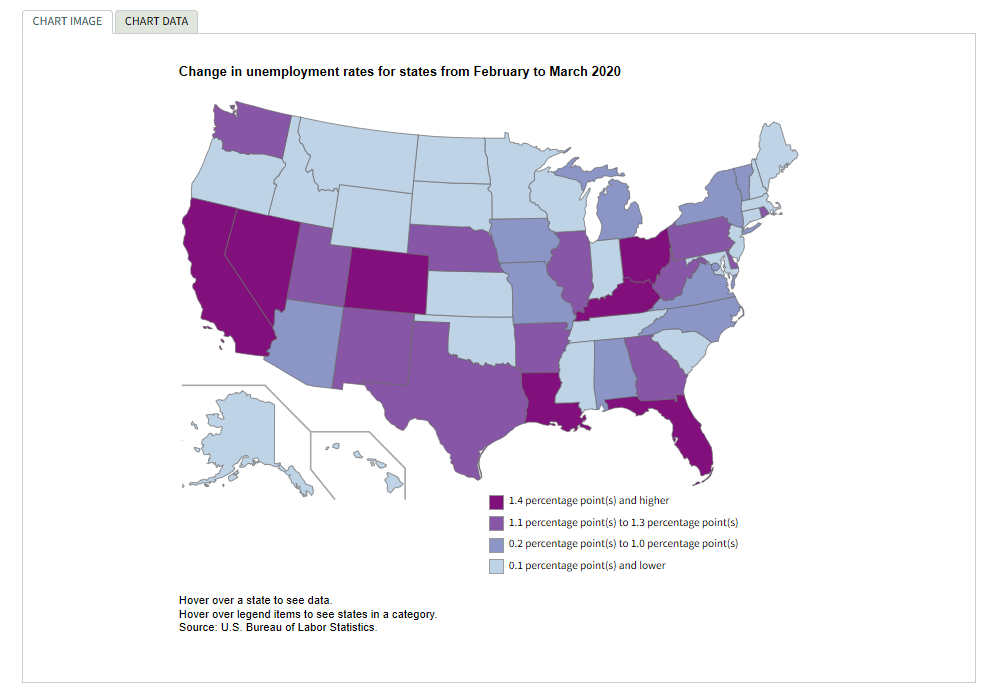 The largest unemployment rate increases occurred in Nevada (+2.7 percentage points) and Colorado (+2.0 points). Additionally, rates rose month-over-month by at least a full percentage point in 19 additional states. Alaska had the largest jobless rate decrease from February (-0.2 percentage point). Eighteen states had rates that were not notably different from those of a month earlier, though some had changes that were at least as large numerically as the significant changes. 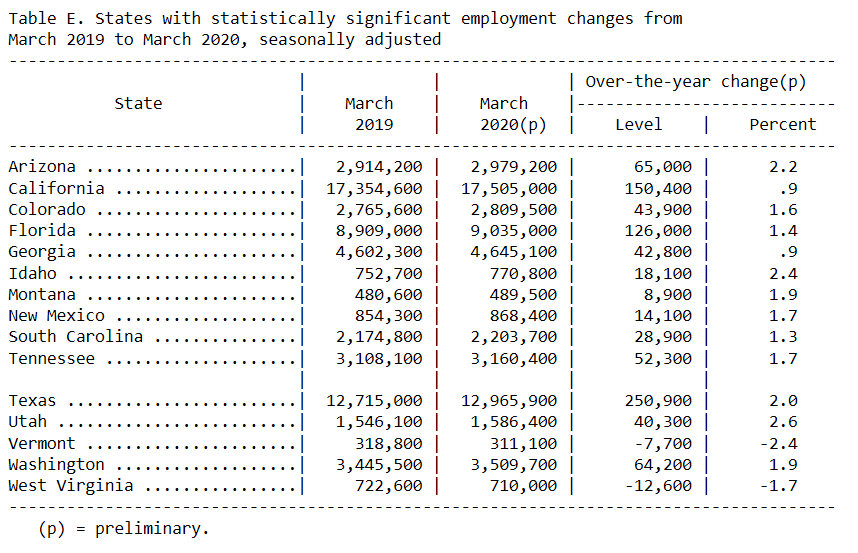 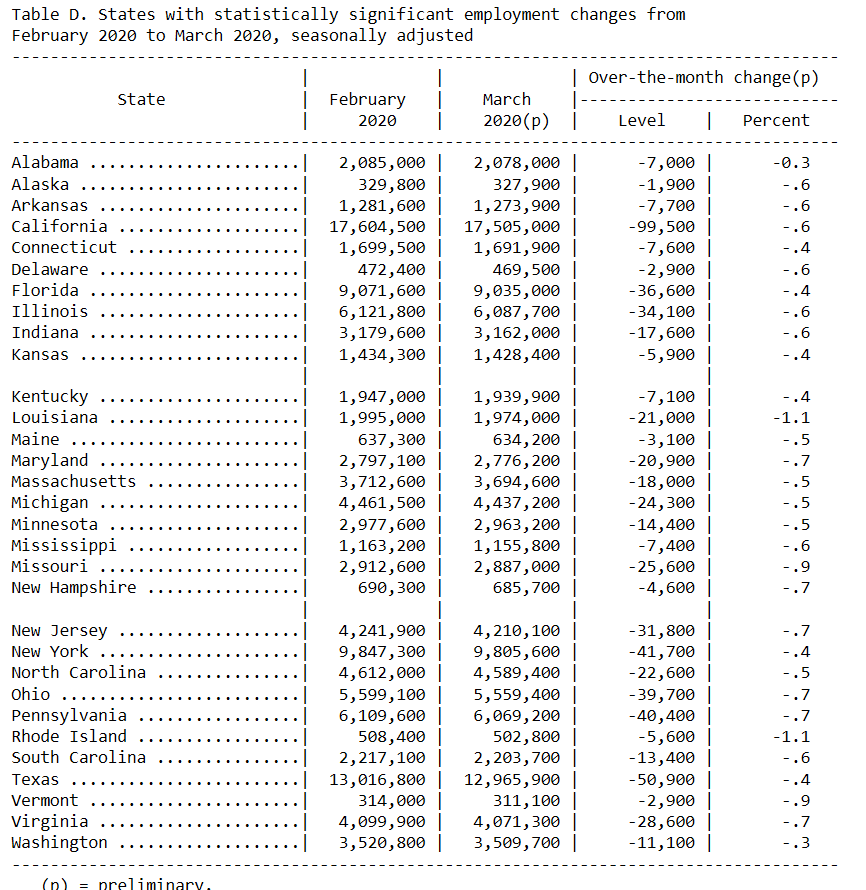 Caption: The largest unemployment rate increases from March 2019 occurred in Louisiana (+2.4 percentage points), Nevada (+2.2 points) and Pennsylvania (+1.9 points), with another 12 states experiencing increases of a full point or more. The largest unemployment rate decreases over the year were in Oregon and South Carolina (-0.8 percentage point each). Nonfarm payroll employment decreased in 31 states in March 2020. The largest job declines occurred in California (-99,500), Texas (-50,900) and New York (-41,700). The largest percentage declines occurred in Louisiana and Rhode Island (-1.1 percent each), followed by Missouri and Vermont (-0.9 percent each). (See table D)

Economic Impact at the Job Level

*All data is courtesy of the Bureau of Labor Statistics

• Leisure and hospitality fell by 459,000. Most of the decline occurred in food services and drinking places (-417,000). This employment decline nearly offset gains over the previous 2 years.

• Social assistance saw an employment decline of 19,000, reflecting a job loss in child day care services (-19,000). Over the prior 12 months, social assistance added 193,000 jobs. Employment in professional and business services decreased by 52,000, with the decline concentrated in temporary help services (-50,000).

• Employment decreased over the month in construction (-29,000). In March, nonresidential building (-11,000) and heavy and civil engineering construction (-10,000) lost jobs. Construction employment had increased by 211,000 over the prior 12 months.

• Employment in the other services industry declined by 24,000 in March, with about half of the loss occurring in personal and laundry services (-13,000).

• Manufacturing employment edged down (-18,000). Over the past 12 months, employment in the industry has shown little net change.

• Employment in other major industries, including wholesale trade, transportation and warehousing, information and financial activities changed little over the month.