Global Light Vehicle (LV) sales dropped to 80.7 mn units/year in February—down from an already-poor 82.3 mn units/year in January. Sales posted a 12.4% year-over-year improvement; however, LMC Automotive reports the figure is distorted because annual comparison data runs parallel to the pandemic spreading across Asia. 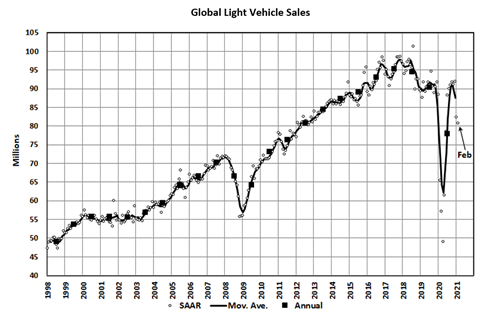 “There are new risks emerging, such as the global semiconductor shortage and the potential for additional disruptions,” said Jeff Schuster, president of Americas operations and global vehicle forecasts at LMC Automotive.

The global shortage of semiconductors has forced General Motors and Ford to cut production at their North American factories as chip supplies seem to be growing tighter, reported Fox Business. The shutdowns likely will impact dealer inventory levels.

“Our initial assessment suggests there could be weakness in the first quarter due to vehicle production losses related to the lack of chips, but we don’t expect a lasting negative effect on the year,” added Schuster.

Stateside, total new vehicle retail and non-retail sales are projected to reach 1,468,300 units in March, a 43.6% year-over-year increase and a 5% decrease from March 2019 when adjusted for selling days, according to a joint report from J.D. Power and LMC Automotive.

Such unrelenting demand means multiple performance records will be broken during the first quarter. “On a volume basis, Q1 retail sales of 3.16 million units will be the second-highest ever, and records will be established for average transaction price, total consumer spending on new vehicles and retailer profitability,” added King.

Wholesale used vehicle prices (on a mix-, mileage- and seasonally adjusted basis) increased 5.87% month-over-month in March—bringing the Manheim Used Vehicle Value Index to 179.2, a 26.2% increase from a year ago and a record high for the Index, according to Manheim. 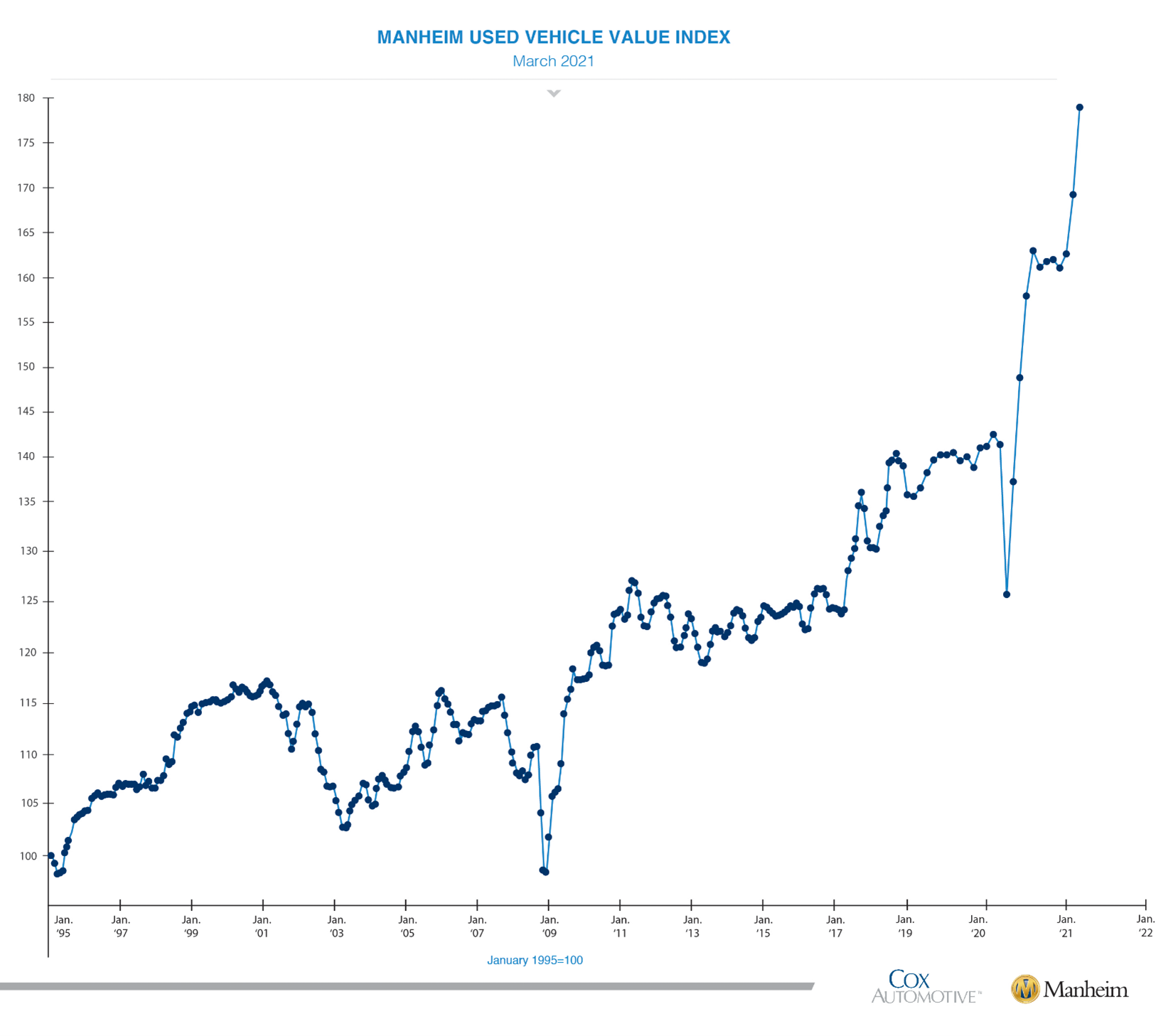 According to the most current Manheim report, the Three-Year-Old MMR Index, which represents the largest model year cohort at auction, increased 1.7% in each of the last three weeks. Over the four full weeks of March, the Three-Year-Old Index increased 6.4%. Over the month of March, MMR Retention, which is the average difference in price relative to current MMR, averaged 102.9%. The sales conversion rate also increased for most of the month.

After increasing 2.5% the week ending March 14, wholesale auction prices increased another 3.1% during the week ending March 21, according to J.D. Power. The week’s exceptional performance extends the streak of week-over-week price increases in the wholesale marketplace to 12 weeks. Wholesale prices are now 5.4% greater than their previous peak back in August 2020.

Industry professionals are enthusiastic to gather once again at the annual SEMA Show, slated for November 2-5 in Las Vegas, NV.

“People are eager to get back to the SEMA Show and reestablish their in-person connections with colleagues and customers,” said Vice President of Events Tom Gattuso. “The groundswell of excitement among exhibitors increases each day, and the Show is the ‘Main Event’ that the industry is looking forward to in 2021.”

Companies across the racing industry are chomping at the bit as well. Booth space is now available for the 2021 Performance Racing Industry (PRI) Show from Dec. 9-11 in Indianapolis, Indiana.

“We know there is a lot of demand for the PRI Trade Show. And while many in the motorsports industry have done well these past 12 months, they still very much need this face-to-face interaction that’s so important to doing business,” said Karin Davidson, PRI trade show director. “PRI is fully committed to an in-person Show in 2021, one that may very well be the best and most important PRI Show ever.”

Until then, SEMA-member companies are preparing to cast their vote for candidates seeking a seat on the SEMA Board of Directors. Voting will take place May 11-25, click here for more details: 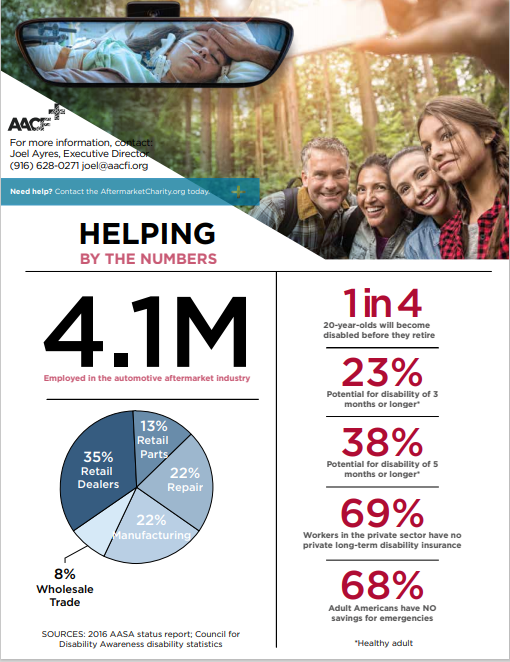 The Automotive Aftermarket Charitable Foundation was founded in 1959 to assist automotive aftermarket members and their families who, due to catastrophic illness or terrible accident, have exhausted all other available resources in maintaining a reasonable existence. The organization’s mission is to provide sustainable solutions for those in calamitous situations. Joel Ayres, Executive Director, asks for companies and individuals to join their cause of paying it forward—whether participating through the awareness partner program, hosting company fundraisers, becoming a sponsor or making a personal donation. For more information, contact Ayres at joel@aacfi.org.

Move Over Wrangler—There’s a New Ride in Town

The all-new Ford Bronco platform was on full display at the recent Easter Jeep Safari, hosted in Moab, Utah March 27 – April 4. As reported by The SHOP Magazine, Bronco is collaborating with three of the off-road aftermarket companies to expand the growth of parts and accessories for customers to personalize their Bronco and Bronco Sport SUVs. 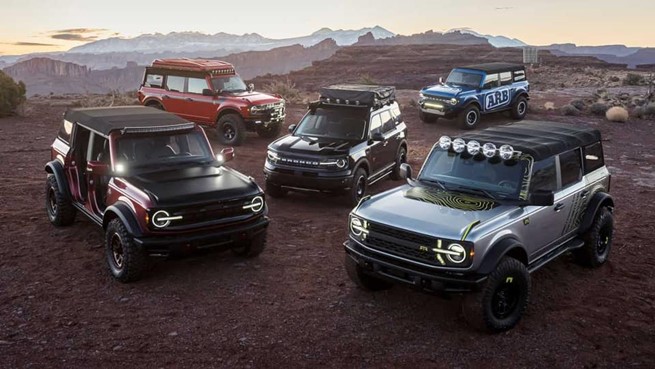 RTR Vehicles, a Ford custom vehicle collaborator founded by Vaughn Gittin Jr.; ARB 4×4 Accessories, an Australian manufacturer and distributor of 4×4 parts and accessories; and 4 Wheel Parts, an off-road parts retailer, are developing parts for the summer launch of Bronco two- and four-door SUVs. 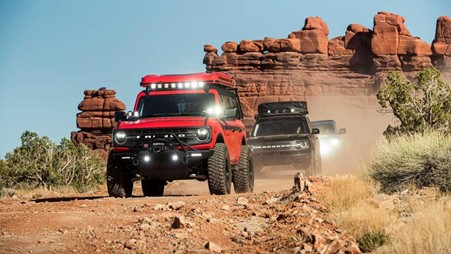 The restyled Broncos impressed onlookers at Easter Jeep Safari. “Not one, but two Broncos were built in record time, with the 4 Wheel Parts and Ford teams outfitting both Broncos with over 35+ aftermarket parts. It was a labor of love and an ultimate testimony of cross functional teams working in synchrony,” said Kathryn Reinhardt, senior marketing manager at 4 Wheel Parts and SEMA board member.