Preserving any classic car is challenging enough without fighting elements that can slowly eat away at the vehicle’s engine cooling system. Water, while excellent at transferring heat, can sometimes do more harm than good.

Water is the root cause of corrosion in engines, eating away at pumps, radiators, thermostats, etc. It acts like a silent killer in your engine, slowly eating away at the car’s metal components from the inside out.

When heated, water releases a significant amount of dissolved oxygen, but as it cools it reabsorbs fresh oxygen. Over time, this cycle leads to the corrosion of metal as corrosion inhibitors drop out of solution. If not maintained and changed regularly, water-based coolants often fail to prevent corrosion. This is especially true for cars that sit for long periods.

Water also acts as an electrolyte if dissolved solids are present (lime scale). This promotes galvanic corrosion, a process in which two metals corrode at different rates, often causing pitting.

Electrolysis damage in an engine cooling system is caused by unintended electrical currents that flow from voltage differences that exist in the engine coolant jacket, the radiator and the heater core. This may result from poorly grounded electrical equipment that has a stray voltage problem. The damage can include rapid corrosion, pitting, flaking, and pinholes.

Another source of electrolysis is from dissimilar metals where the coolant is in contact. The engine coolant is the conductive path that promotes galvanic corrosion, causing pitting erosion and pitting of metal, or electrolysis damage. 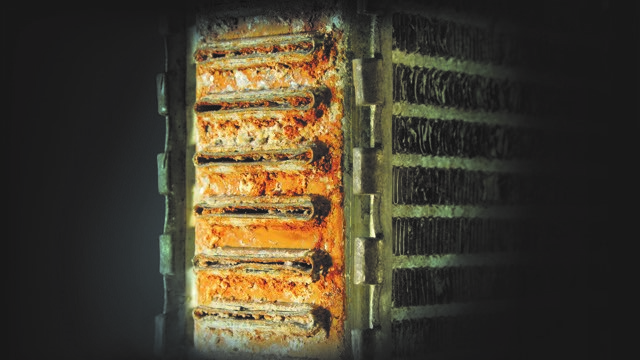 Boil Over
Any liquid coolant system needs to be devoid of any steam pockets which prevent efficient heat transfer. If there are any such pockets of steam or air in the cylinder head, then there is no actual liquid-to-metal contact to absorb the heat because the vapor pressure “pocket” will not allow liquid coolant to enter, flow against the metal surface and conductively transfer the heat.

Less heat is removed from the engine, the metal gets hotter, more bubbles form, and the cycle continues. That’s when cylinder head surface temperatures will soar, potentially resulting in extreme thermal stress.

Prevention
Waterless coolants offer protection from some of the problems that typically plague engine cooling systems. By replacing your go-to vehicle coolant with a waterless one, like Evans Waterless Coolant, you can help any classic car owner extend the life of their vehicle.

Because waterless coolants contain little oxygen, they are comparatively poor conductors in comparison to water-based antifreeze, so metal corrosion and degradation is eliminated.

Evans Waterless Coolant also has a boiling point of 375 degrees, more than 150 degrees above normal operating temperatures. A high boiling point allows the coolant to remain in its liquid state and at a lower pressure, ensuring constant liquid-to-metal contact, preventing hot spots and assuring consistent heat transfer even at temperatures past the failure point of water-based coolants.

With lower pressure, coolant leaks are also less likely to occur. But in the event of a leak, Evans will be a slow drip, rather than a high pressure, high volume expulsion of hot coolant.

In fact, it’s so effective in preventing these issues that the American Muscle Car Museum, the Wellborn Musclecar Museum, the Simeone Foundation Automotive Museum, Jay Leno’s Garage and many other collectors have been converting their priceless cars to Evans Waterless Coolant for long term preservation benefits.