Hennessey Performance has unveiled the production version of its Venom F5 hypercar, ahead of customer deliveries in 2021 – the company’s 30th anniversary year. The all-new, 100% bespoke Venom F5 is built with immense power, low weight and meticulously honed dynamics, the company said, and boasts extraordinary handling and a truly visceral experience behind the wheel.

Priced at $2.1 million dollars, just 24 versions of the Venom F5 will be produced with each example unique to its owner. The car will be powered by the Hennessey-built 6.6-liter twin-turbocharged V8 engine named ‘Fury,’ which delivers 1,817 hp at 8,000 rpm and packs 1,193 lb.-ft. of torque.

The Venom F5 project is overseen by company Founder and CEO John Hennessey, who has shaped every aspect of the car’s specification, design and development. John has combined knowledge from the company’s past 30 years of making fast cars faster with the highest levels of specialist engineering talent.

“Our customers love speed, so we’re fired-up to push the boundaries of what’s possible to attempt the world’s fastest production car record, but the Venom F5 is about more than just speed and power,” said Hennessey. “This car will handle superbly, quality is exceptional, there are more than 3,000 bespoke parts, materials are exquisite, everything is a fitting tribute to 30 years of the Hennessey brand.”

The F5 will complete top speed testing in the first half of 2021 at the NASA Shuttle Landing Facility in Florida. Subsequent top speed runs will follow an intense period of real-world development at Hennessey’s own testing facility, plus the Circuit of The Americas – with John Heinricy leading the development team and conducting the bulk of hands-on testing. 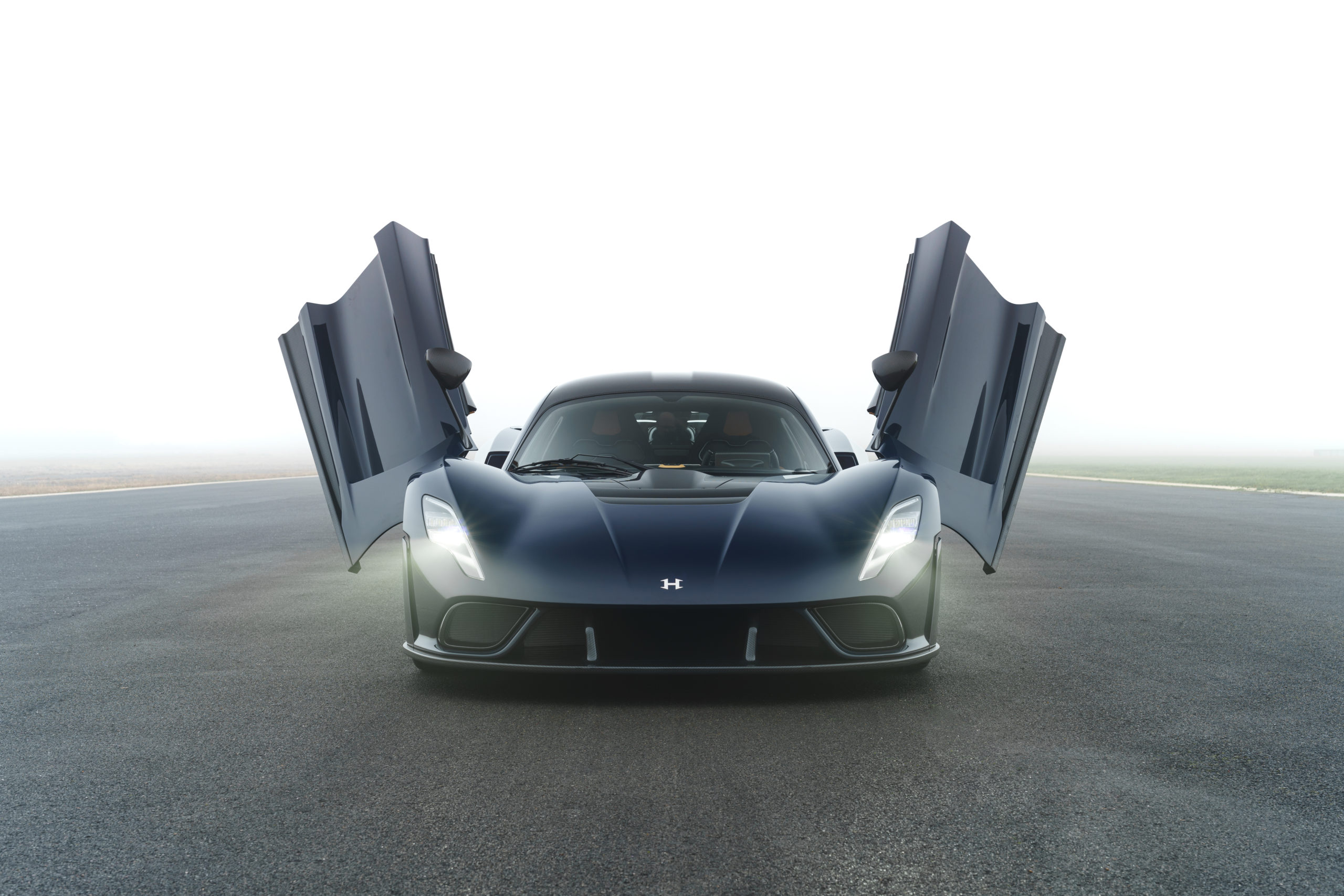 The F5 aims to exceed 500 kph (311mph) on a two-way validated speed run using a production specification car. The record attempt will be independently verified by experts from Racelogic using VBOX GPS data acquisition systems. Racelogic / VBOX engineers will be on site to install, test and calibrate the speed testing equipment in the F5 to ensure absolute accuracy and transparency. In addition, VBOX engineers will verify all test data and final speed numbers. The speed test will be attended by independent witnesses, media guests and F5 customers. GPS data and uninterrupted video footage will also be made publicly available following the speed test.

Heinricy, who is the chief engineer on the project, moved to Hennessey from his position in charge of all performance vehicles at GM, where he spent 38 years. Heinricy has more than 240 professional races under his belt, including thirty-five 24-hour races and multiple race / championship wins. He also holds three FIA Speed Records and has in excess of 1,000 laps of the Nürburgring to his name.

“Of all the cars I’ve engineered in my career, the Hennessey Venom F5 is one of, if not the most accomplished, exciting and rewarding cars to work on,” said Heinricy. “With the F5 we started off with a blank sheet of paper. This is such an advantage for vehicle dynamics, as it has allowed me to draw upon the best parts of cars I have worked on throughout my career. It has given me the freedom to design the layout of the car exactly as I wanted it to be and equip it with the best possible componentry. Our intensive track and road development will ensure this car handles and performs as impressively as the world’s best hypercars.”

The F5 was designed to be light to ensure nimble handling at lower speeds, while enabling high top end performance, Hennessey said,  and the rigidity offered by the F5’s 190 lb carbon tub is crucial, not only for stability at high speed, but also for precise cornering and road-holding. The monocoque’s torsional rigidity, 38,353 lb.-ft., provides a solid base to build from and proving essential for the car’s agility.

Aerodynamic performance, which has been refined and evaluated extensively using computational fluid dynamics (CFD), will be adjusted by Heinricy in the real world with a series of ‘coast-down’ tests. These run the car to a designated speed then coast while recording downforce and drag.

Alongside aerodynamics, significant consideration was given from the outset to both unsprung mass and achieving a low center of gravity. The F5 uses carbon-ceramic brakes, forged aluminum wheels and lightweight Penske dampers to keep unsprung mass low. The center of gravity is kept low by positioning the powertrain deep within the car’s sub-structure. The Hennessey-built engine features a dry-sump that enables the crank height to be kept very low to the ground.

The F5 transfers the car’s forces through its rear wheels to the ground. with the car’s Motec controller, which will be calibrated for optimum power and traction control. In addition, five different drive modes (Sport, Track, Drag, Wet, F5) can be selected that alter the power delivery, traction and braking performance of the car. Only the top ‘F5’ mode will unlock the maximum available power. 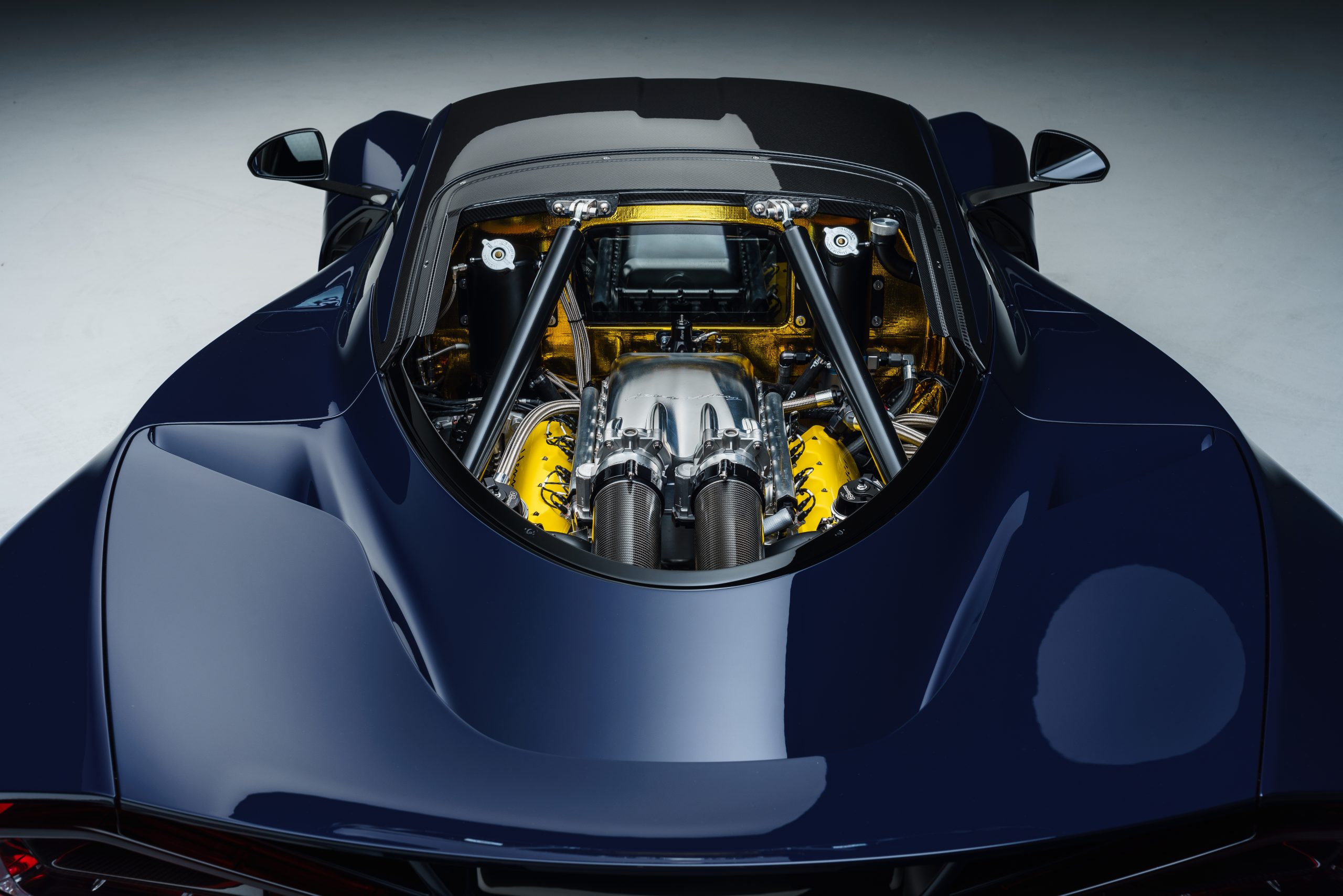 The car’s 345/30-20 rear tires provide a substantial contact patch to boost traction under acceleration and cornering. At the front are 265/35-19 tires. Michelin will test its Pilot Cup Sport 2 tires to ensure they can withstand the speeds and loads that the car will generate.

“Our team built the Venom F5’s ‘Fury’ V8 motor with one vision – to deliver a unique and unparalleled driving experience,” said Hennessey. “The engine commands complete respect. It’s intimidating – in a good way. It totally dominates the driving experience and keeps goading you to unleash its power, challenging you to tame it.”

The Fury is a 90-degree push-rod cross-plane crank V8 engine that weighs 617 lb. The bespoke unit features an all-new cast iron block and aluminum cylinder heads and runs an aggressive road cam. Each engine is hand-built with precision components crafted from high-grade metals including aluminum, titanium and Inconel. These include the crankshaft, pistons, valves and connecting rods.

A unique intake manifold design places the intercooler between the plenum and cylinder heads allowing the inlet air temperatures from the turbos to be greatly reduced before the charged air enters the combustion chamber, resulting in greater air density and enhanced power efficiency. The Fury’s multi-stage dry sump oil system uses Pennzoil 10w60 synthetic motor oil to deliver optimum performance right up to its 8,500 rpm (in F5 mode) redline.

Cerakote is a ceramic-polymer treatment that is often applied to the inside of gun barrels to protect from heat and wear. By coating the underside of the engine bay cover, rear deck and the entire exhaust system, the impact of heat on each part can be reduced significantly, the company said. 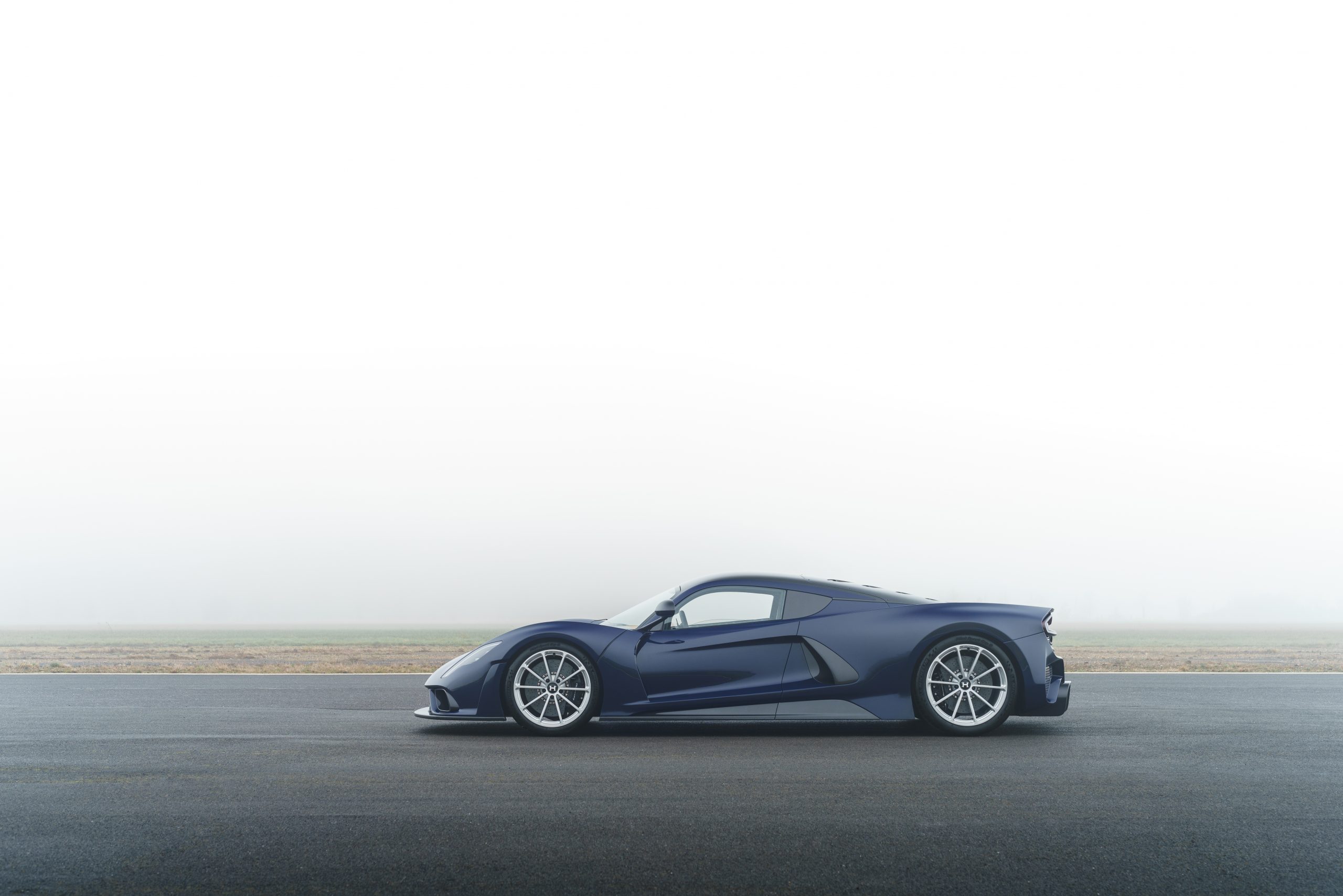 The exterior body panels are constructed from high-strength carbon fiber for weight saving. The carbon-fiber tub also plays an important structural role, the company said. A pair of braces link the double-wishbone suspension directly to the monocoque. This transfers forces to the exceptionally rigid carbon fiber shell, aiding to the car’s stability, road holding and predictable handling even at high speed and under extreme cornering loads.

The exterior design of the F5 combines minimal sharp lines with smooth flowing surfaces, Hennessey said, with every part of the car’s sculpted body informed by the car’s function.

“We started our design journey with a goal to be the fastest car in the world. As the F5 evolved and our targeted dynamic capabilities were defined, we relied on a guiding principle that function defines form to sculpt the exterior,” said Nathan Malinick, Hennessey director of design. “We worked hand-in-hand with our engineering team to ‘skin the beast’ with aerospace-inspired forms to create a machine that is highly capable technologically, but that is also beautiful.”

Sitting low to the road, the front profile of the F5 sees a pair of air intakes pushed towards the outer lower edges of the car. The front clamshell is intersected by two supporting pillars of the carbon diffuser.

Behind the front splitter, the bodywork channels air under the flat floor towards the diffuser at the rear. Two large ducts at either side of the front bumper force air towards the brakes for cooling, while the front clam has a steep rake that forces air upwards and over the door mirrors for minimal drag. On both corners at the front, two subtle ducts separate the airflow moving it away from the wheels, to reduce drag-inducing turbulence. Discrete cut-outs behind the front wheels create high-pressure zones to clean up body-side air-flow, while similar ducts on the rear haunches allow airflow in to cool the F5’s gearbox and powertrain. 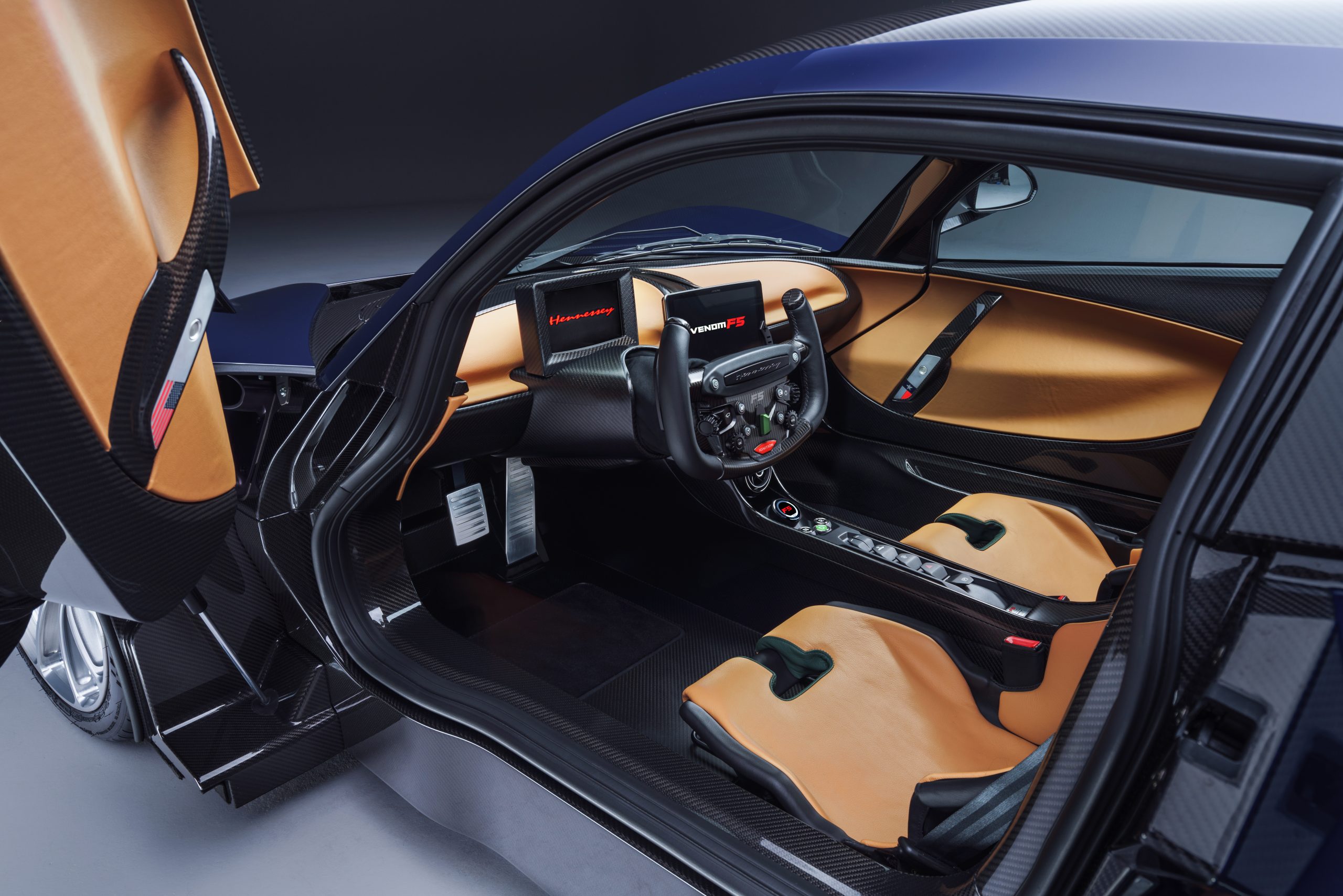 The car’s compact dimensions measure just 183.7 inches long and 77.6 inches wide and is only marginally larger than the Venom GT.

At the rear the F5’s spoiler is subtle, a cut-out that sits just above the bodywork and the rear deck of the car, allowing air to flow above and underneath enhancing stability at high speed while boosting downforce for regular road driving. Customers will be able to order a ‘track pack’ that includes a more aggressive front splitter and a rear-mounted wing, which replaces the rear spoiler to deliver greater downforce.

On the inside, there is nothing inside the car that is peripheral to the act of driving, Hennessey said.

The car is equipped with a bespoke carbon fiber steering wheel. To maximize driver visibility of instrumentation and the road ahead, the top of the wheel is eliminated, while also encouraging proper hand placement for optimal steering wheel control. The parts of the steering wheel where the hands naturally grip are leather-clad, while the rest is exposed carbon-fiber. On the wheel are tactile controls for lights, windscreen wipers and turn signals, while in the center sits a green switchable mode dial that lets the driver select from Sport, Wet, Drag, Track, and F5 modes.

Behind the wheel on the top of the steering column sits a 7.0-inch instrument display cluster. The screen changes with each drive mode, displaying a different color and content layout. At all times the screen displays vehicle speed and engine revs alongside oil, coolant and engine temperatures.

Carbon fiber bucket seats are cushioned with leather-clad pads and accommodates two people. The interior surfaces are a balance of leather and satin-finish carbon fiber. The dashboard features leather and aluminum inserts overlaid on the carbon fiber. The driver is surrounded by a belt of gloss carbon fiber, which houses the function buttons for the windows, hazard lights, parking brake, vehicle lift system and door locks.

On the dashboard, there are three circular buttons for gearbox operation and a 1.3-inch digital screen set within it, which is used to adjust the car’s HVAC systems.

Above the central vents sits a 9.0-inch Alpine touchscreen infotainment system. This gives the driver and passenger access to Apple Car Play and Android Auto with satellite navigation, stereo functionality and Bluetooth phone pairing for hands-free phone and multimedia use.

The F5’s pedals are machined from solid aluminum. In the passenger footwell, there is a small compartment that stores a tool kit by default, but customers can also personalize the storage space to meet their own requirements. 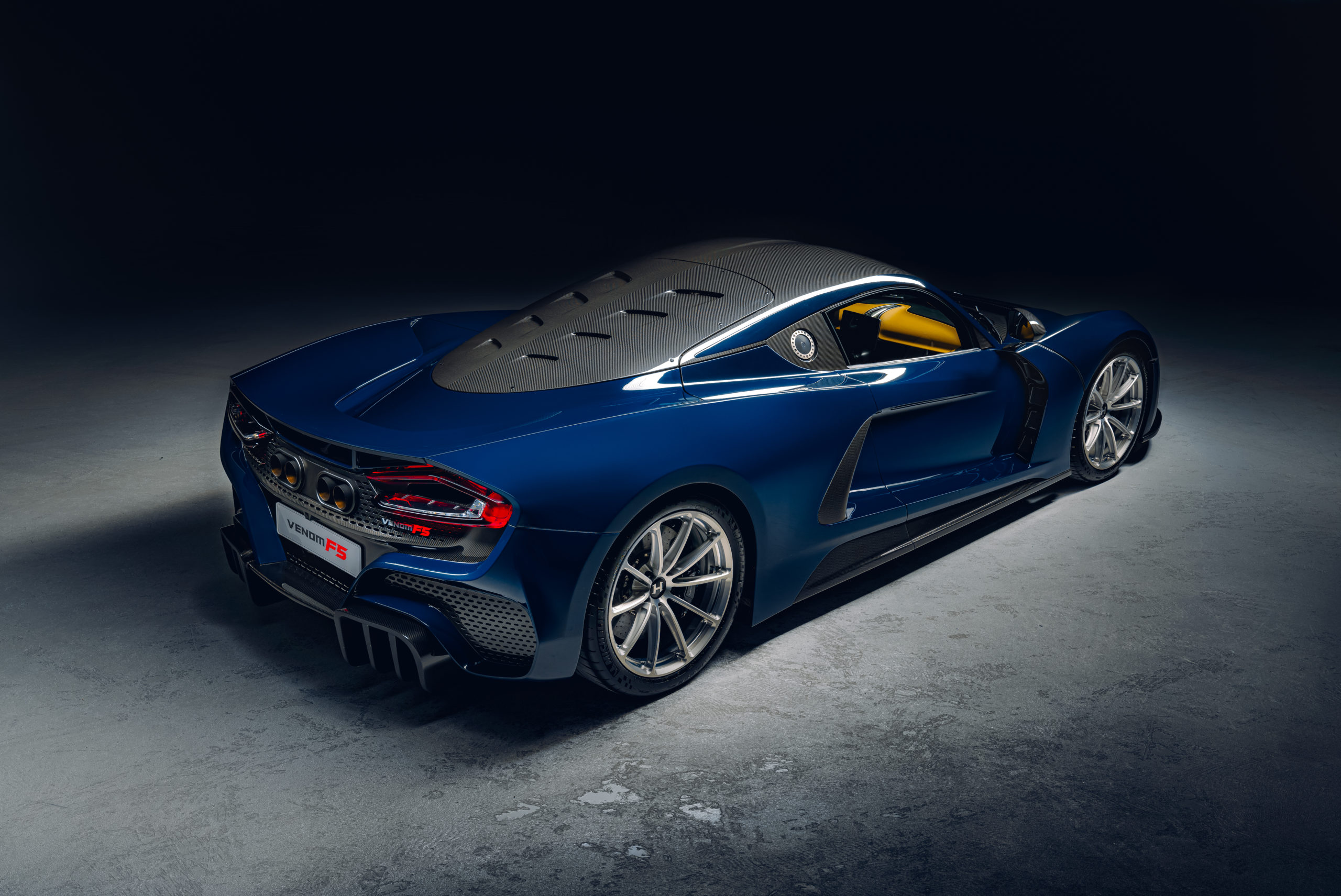