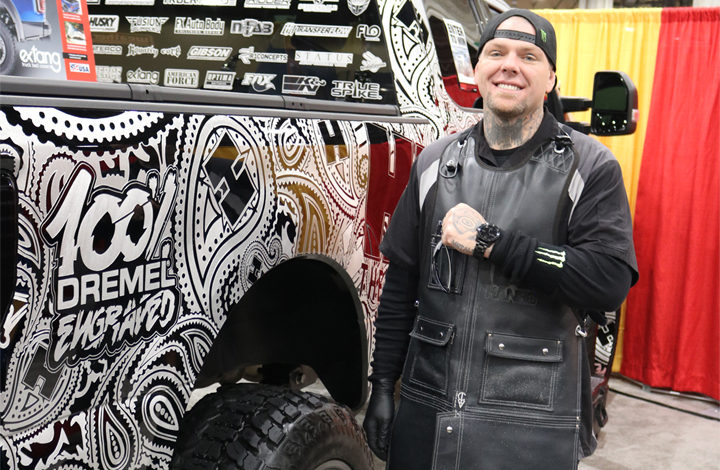 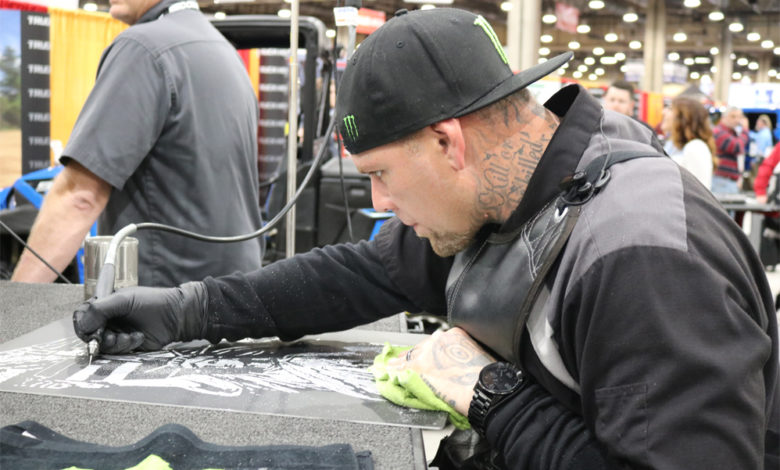 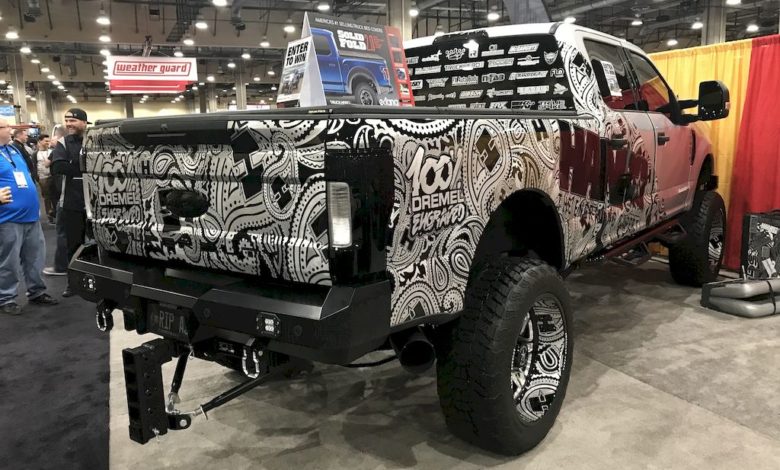 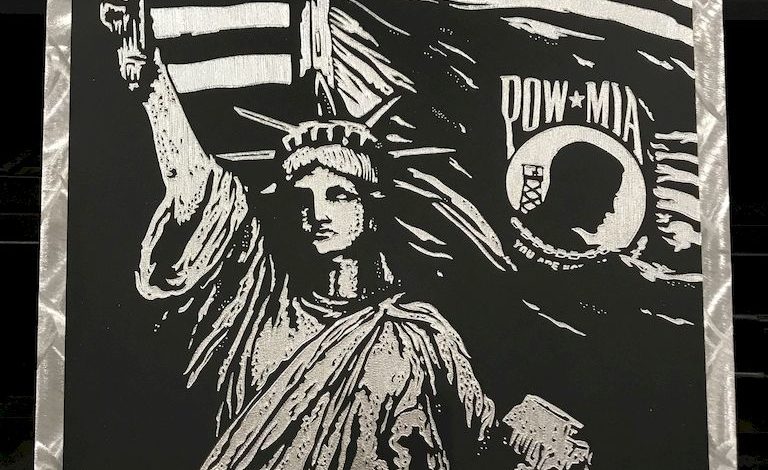 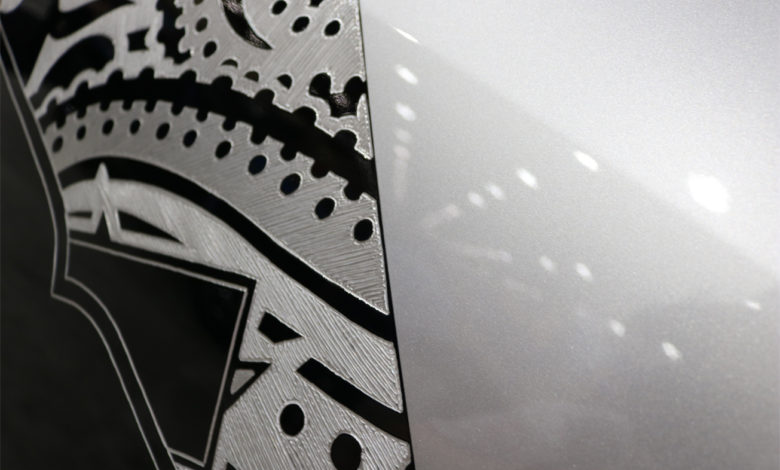 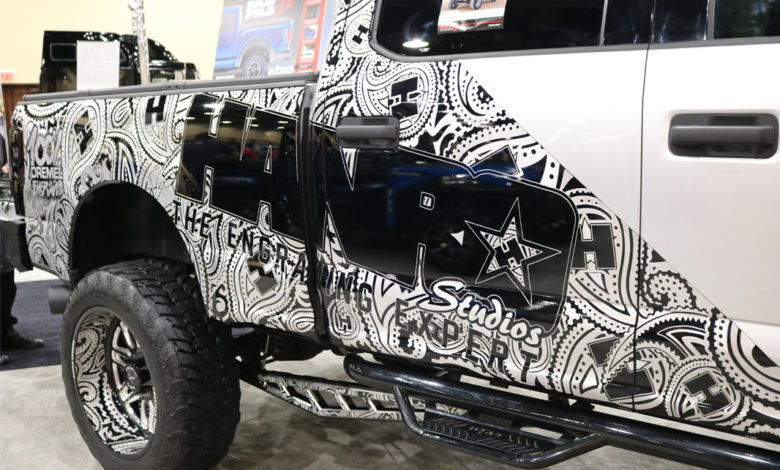 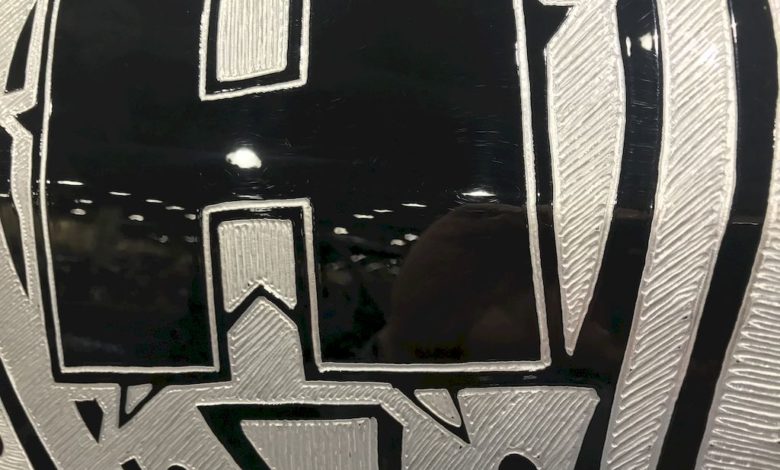 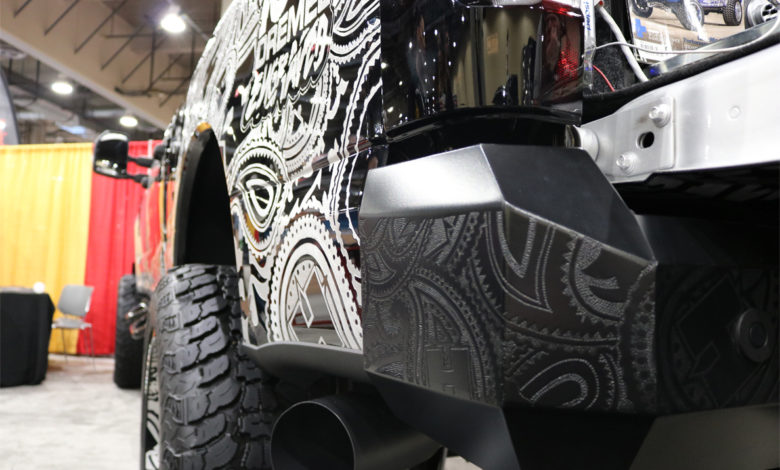 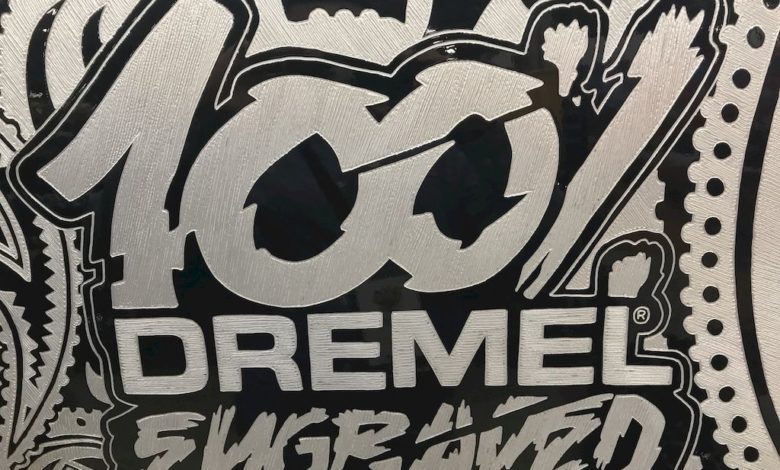 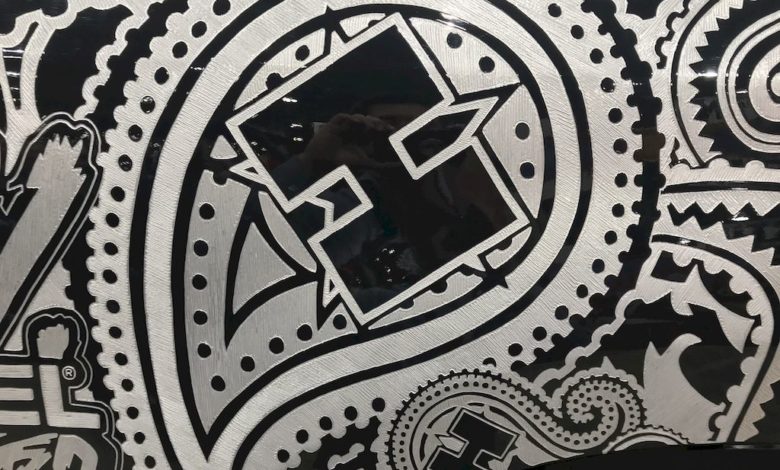 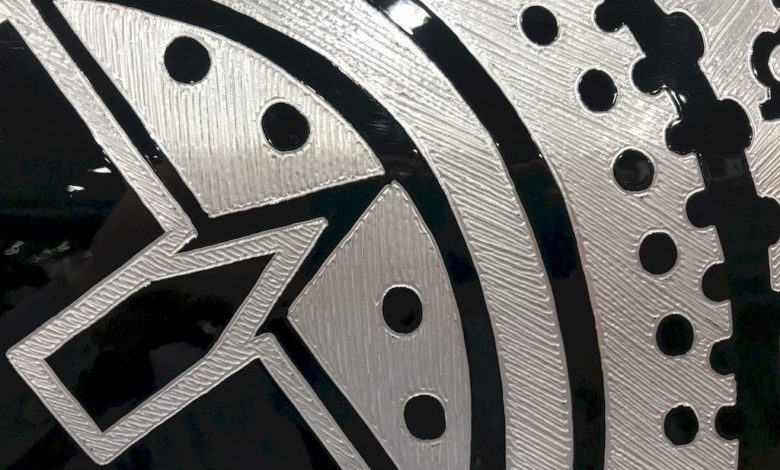 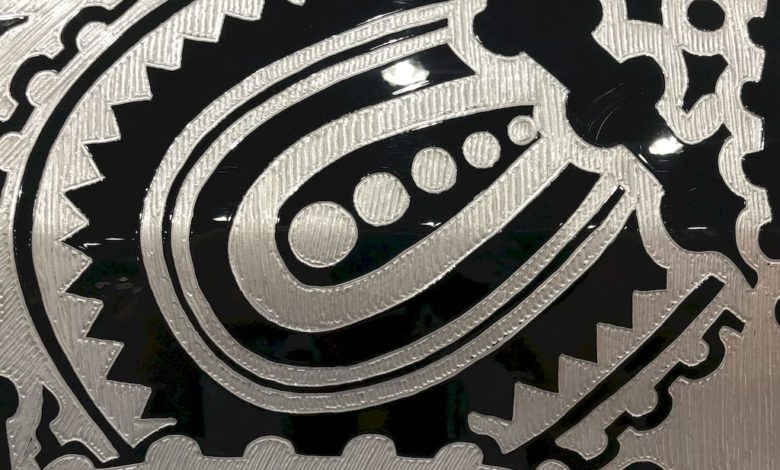 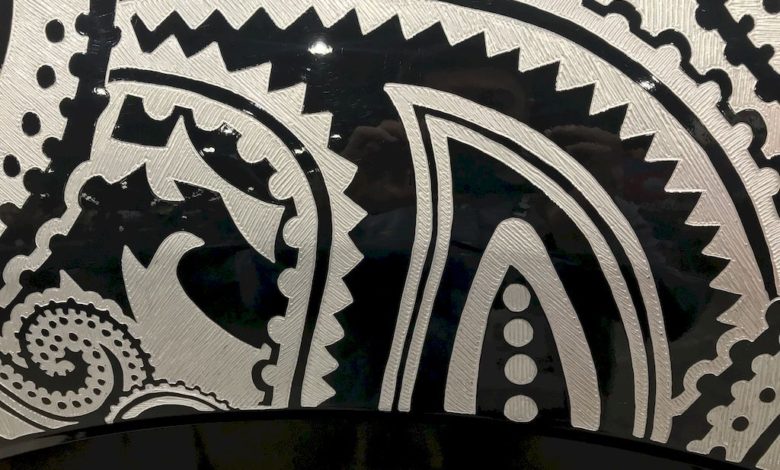 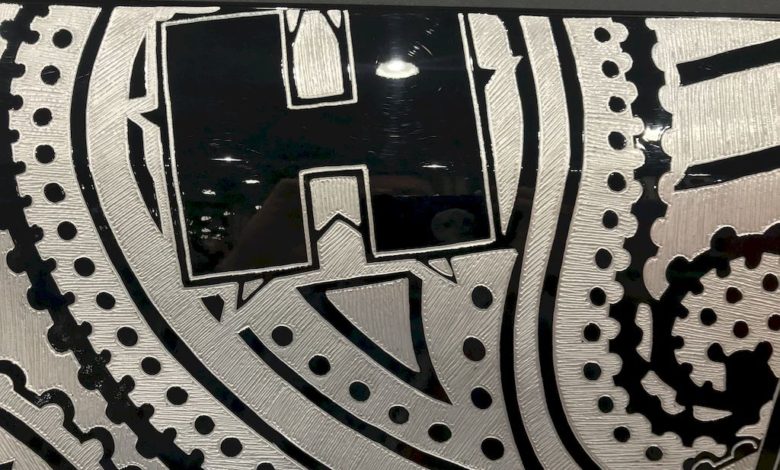 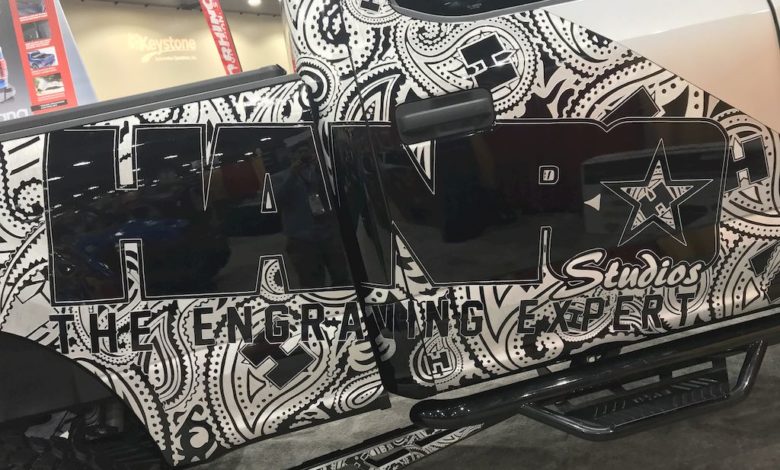 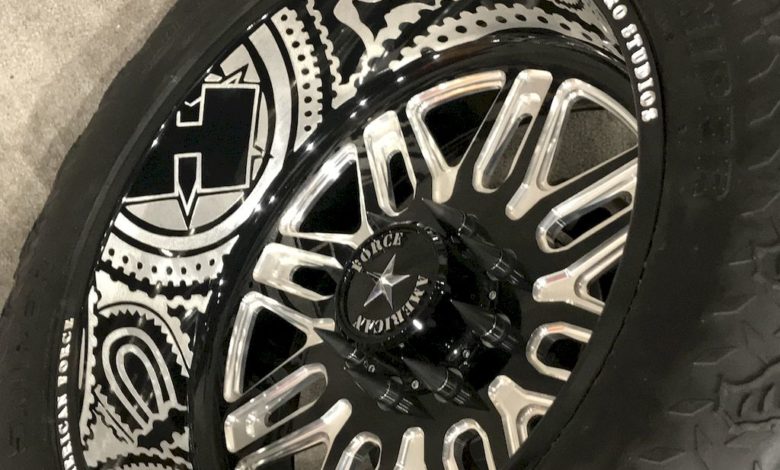 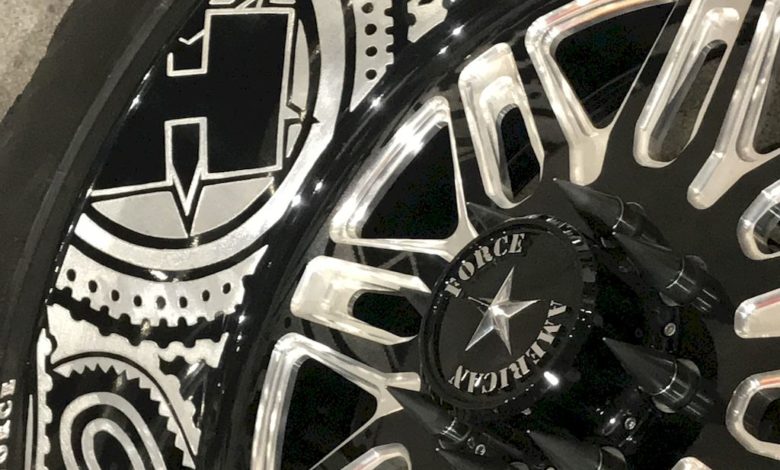 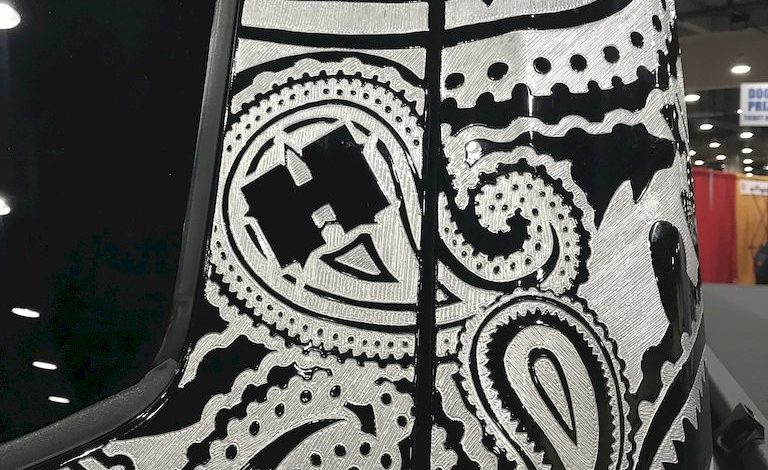 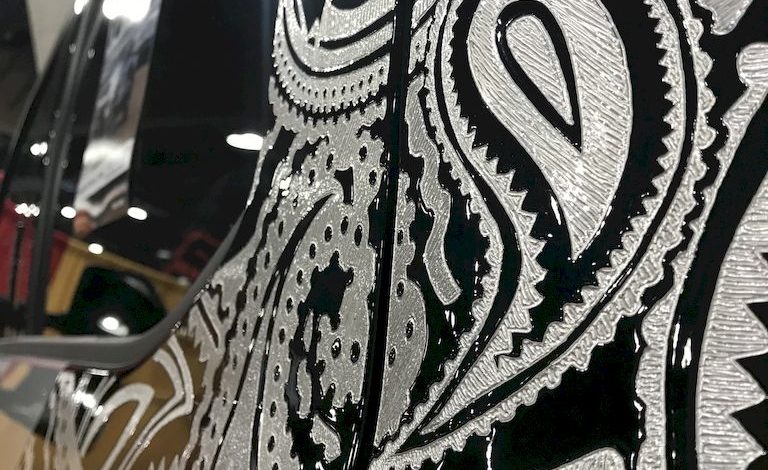 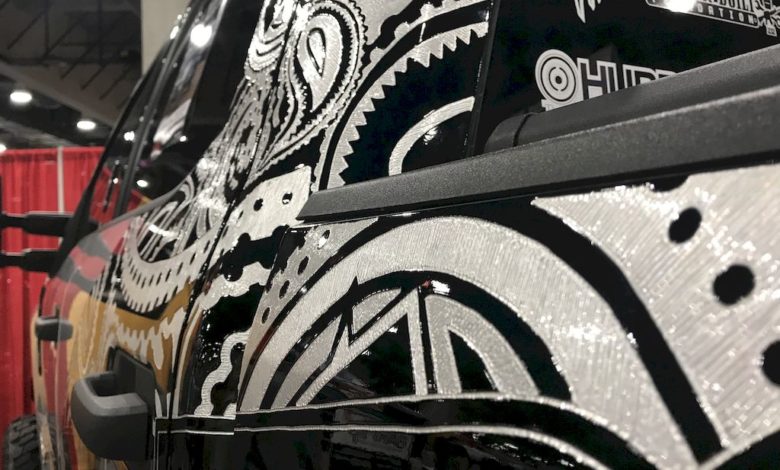 The aisles at the Feb. 23-24 Keystone BIG Show in Grapevine, Texas flowed with ease as jobbers shuffled from booth to booth. The constant movement and hum of sales chatter buzzed like a homogenous spirit pushing business deals forward.

Near the Extang booth, however, chirps of curiosity lifted above the monotone hum and the aisle occasionally clogged like a dammed stream. Onlookers stopped, pointed and took pictures. Dumbfounded questions sometimes fell from their lips: “Is that a wrap? How the heck did he do that? How much time did that take?”

Some who attended this year’s SEMA Show may already be familiar with Robinson’s F-250 Super Duty. The truck-nicknamed Aluminati-also appeared in the American Force booth.

Robinson painstakingly etched an intricate graphic into the truck’s aluminum like a tattoo artist. The truck’s back bumper, tailgate, sides, wheels and even the shock absorbers were Robinson’s canvas. The engraving took just under 800 hours and four months to complete.

“I like to educate people about what is possible for customization,” said Robinson, who owns Hanro Studios near Glendale, Arizona.

The engraving from afar looks like an extraordinary wrap. Standing two steps from the truck, however, reveals every carved stroke from Robinson’s Dremel.

“I get the concept of people touching it. I don’t have an issue when they touch it with their fingers,” Robinson said, “but when they use their whole hand or nail to feel it, that kind of makes me lose my cool.”

Robinson accomplished this effect on the rear and sides of the truck by first applying a gloss black ceramic coat of paint and using carbon pins to get the base outline. After engraving the design he applied a ceramic coat, which he reapplies every six months.

Robinson showcased his skills at the Keystone BIG Show with a live demonstration, engraving a piece of sheet metal with an image of the Statue of Liberty, American flag and a Prisoners of War Missing in Action flag. Extang at the end of the show rewarded that piece to Norm Dunn of Number One Speed Truck Accessories, based in Watertown, New York.

Robinson has already started designing his next vehicle art project, a 1966 Lincoln Continental. He estimates the project will take up to nine months to complete.

“I have to get the body media blasted,” he said. “It’s 50-year-old metal this time, so there’s more precautions I want to make.”

Robinson is a 10-year Army veteran with tours of duty served in Iraq, Afghanistan and Kosovo intermittently from 2003 to 2008. His leadership led him to eventually serve as a squad leader of a scout sniper platoon.

Returning home to civilian life from his last tour of duty was challenging for Robinson.

“I had the worst 2-1/2 years after I got out of the Army. Everything hit me so bad and I didn’t have a support structure or guidance of what to do and who to talk to,” he said. “Once you figure out the resources that are out there for you and realize that there are people out there who have your back, it saves lives.”

Robinson also discovered how to put his passion for art to work.

“It has absolutely been an instrumental part of my life. I really didn’t fit the 9-5 working class mode. I needed to find my own lane,” he said. “With engraving I found that. I’ve flourished and provided for my family, and helped other veterans and helped raise money for veteran organizations.”

“We like to do three classes per year. It’s eight weeks for the class and eight to 10 vets at a time. The next one is in June,” Robinson said.

The vocational and recreational rehabilitation provided to combat vets through the Warrior Built Foundation is especially useful, Robinson added.

“It’s about getting guys together, doing offload racing, going to concerts and having individual PTSD therapy sessions,” he said. “We go out for the Baja 500 and 1000-we get a bunch of vets who haven’t been in that scenario and who actually haven’t met each other before we got out. It all relates to team building and the squad tactics they’re already used to, like land (navigation) and food prep. Those are similar things we’d do overseas.”