Ariel North America has announced that production of the new Ariel Atom 4 has begun in the United States.

The fourth generation of the Atom is a complete rebuild of Ariel’s previous generation. The vehicle’s exoskeleton design is all-new while retaining the Atom look. Power comes from a new Honda Performance Development 320-horsepower engine and is capable of propelling the 1,350-pound vehicle from 0 to 60 mph in 2.8 seconds, and 0-100mph in just 6.8 seconds with the top speed is 162mph.

“The Atom 4 continues the simplistic design but is an entirely new car from the ground-up. Building on previous generations, customer feedback, Ariel technicians and significant R&D by Ariel,” the company said in a statement announcing the production of the vehicle, “the Atom 4 preserves the essential Ariel qualities but progresses the design and engineering further into the highest performing standard Atom produced so far.”

Simon Saunders, director of Ariel UK, said “The Atom 4 is the biggest change to the car since we originally released it in 1999. It really is an all-new car; in fact, there are only three parts carried over from the last Atom – the clutch pedal, the brake pedal, and the fuel cap.”

Atom 4 features the latest Honda Performance Development Civic Type R turbocharged engine with 320-horsepower. The chassis, suspension, steering and brakes are all-new, as are the seating and instrumentation in the car’s interior. The bodywork also has significant aerodynamic improvements, Ariel says. 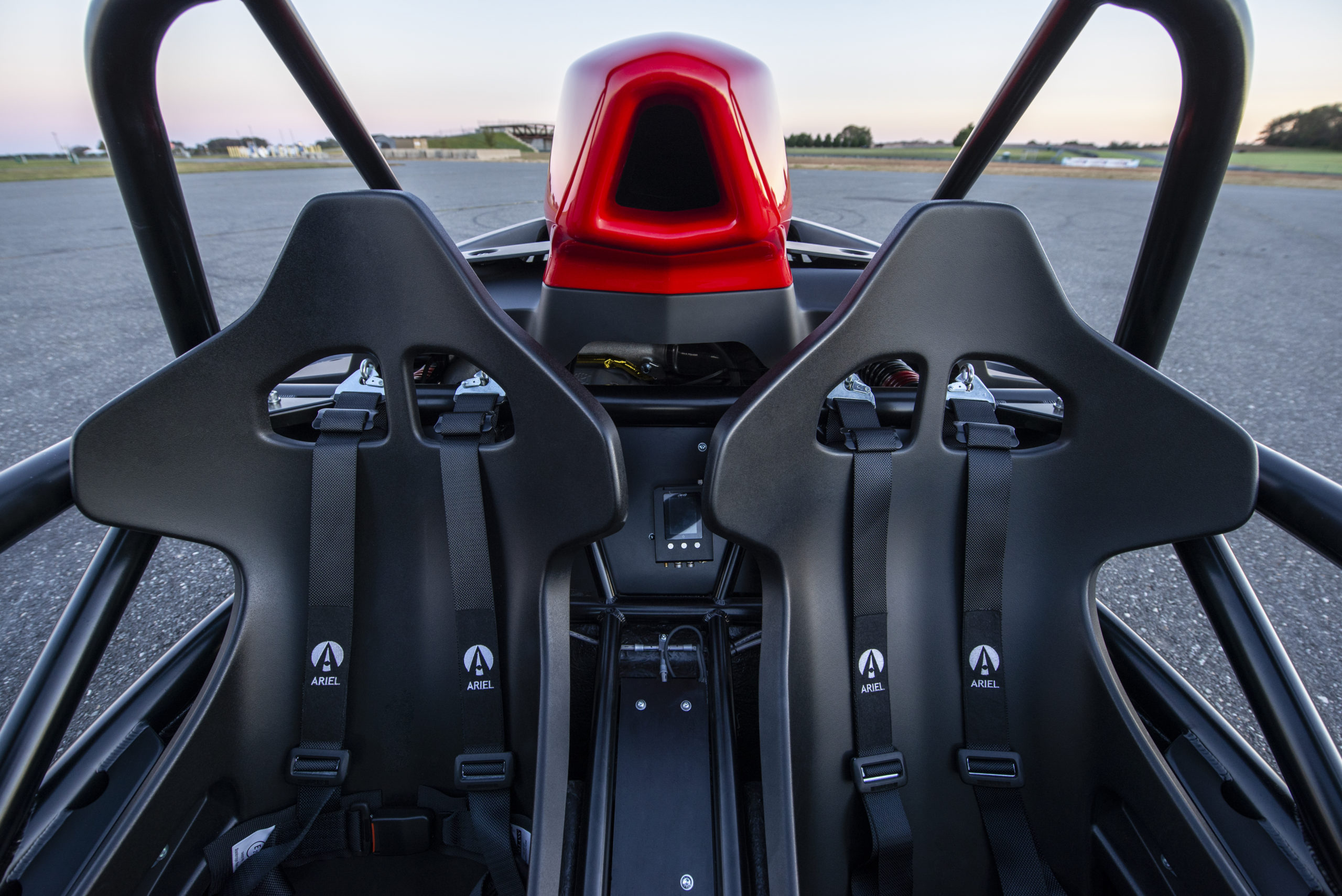 All North American Ariel Atom 4 supercars will be specifically built for each individual customer preferences at TMI AutoTech, Inc. facility in Virginia. Simple adjustable features allow the driver to customize virtually every aspect of performance, from camber and toe to ride height and more.

“We are proud to uphold the Ariel brand while showcasing American talent and craftsmanship” exclaims Mark Swain, President of TMI AutoTech.

The basis of Atom 4 is an all-new tubular steel chassis, designed by Ariel. Featuring larger diameter main and diagonal tubes than previous Atoms, as well as many detailed additions, each tube within the chassis has been analyzed and optimized, resulting in a light but strong structure. The torsional stiffness has been increased by 15% compared to the previous generation without any increase in weight.

The wheelbase of the bronze-welded Atom 4 structure is nearly two inches longer than the previous model, which translates into more interior space and legroom. The new structure allowed for more efficient placement of the engine, suspension components and a larger fuel tank.

Tom Ward, Ariel’s chief engineer, said “Redesigning an icon can be quite intimidating. Our growing design and engineering team forms 25% of the Ariel workforce, so we are committed to making Ariel absolute leaders in their field.” 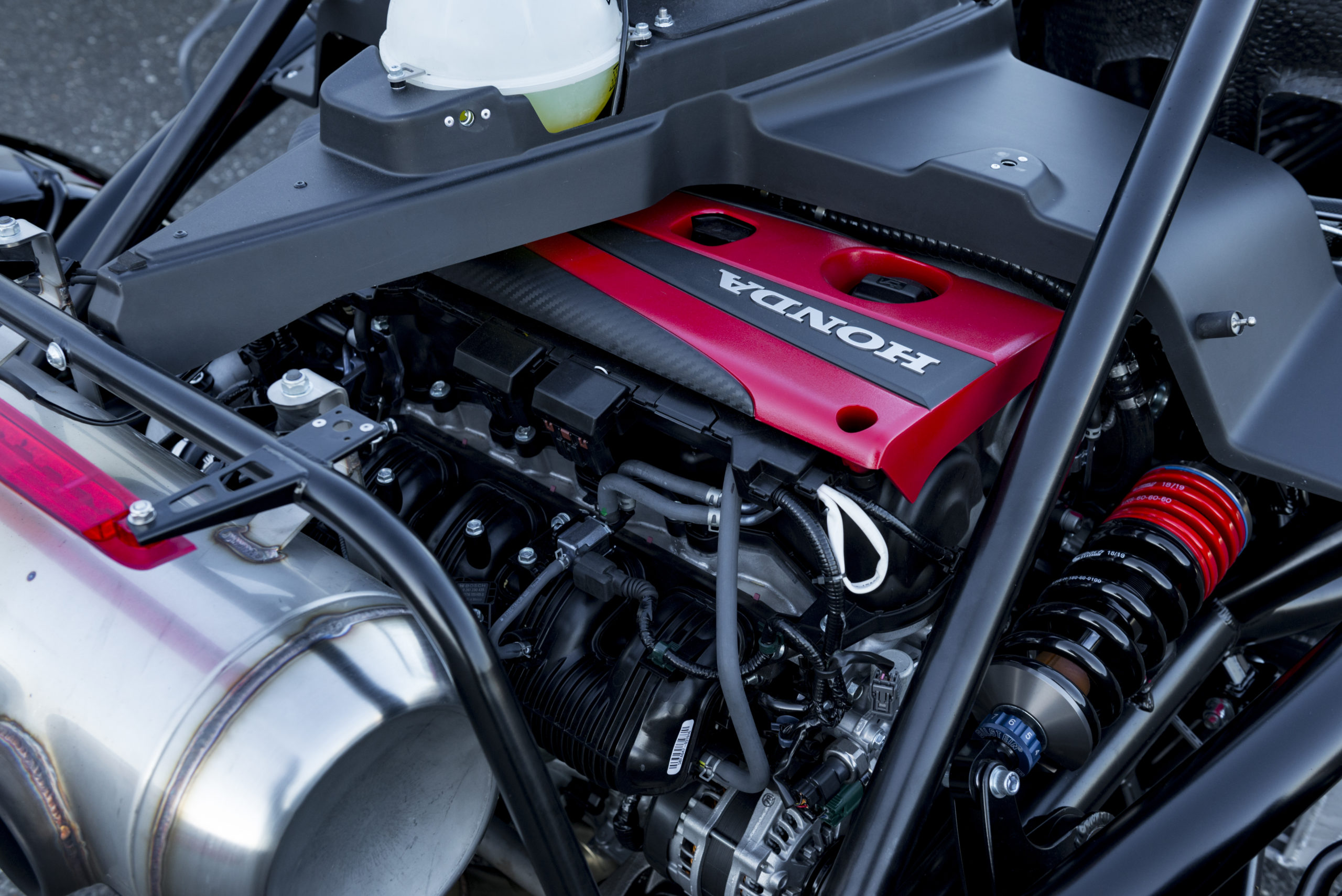 Retaining the inboard, pushrod operated damper system, the Atom 4 features all-new suspension geometry. Based on 18 years of continual development from Ariel, the new geometry includes revised inboard and outboard points plus anti-squat and anti-dive to reduce unnecessary body roll and weight transfer, keeping as much tire contact as possible at all times. All new Bilstein dampers sit inboard, operated by pushrods via new geometry bellcranks.

Revised steering rack, with improved geometry, gives the new Atom accessibility for all types of drivers under all driving conditions. “It’s important that the Atom not only handles superbly but has ultimate driveability,” said Sam Evans, engineer in charge of Atom suspension development. “On Atom 4 we have gone to enormous lengths to ensure the car is as easy to drive on the road as it is fast on a race track.” The steering changes also reduced the turning radius to aid town driving and parking.

At the heart of the Atom 4 is the new Honda Civic Type R K20C 2.0-liter four-cylinder, direct-injected, turbocharged engine. Simon Saunders said “The use of Honda engines is critical for us and our customers. The Type R engines have proven themselves in Atoms over the years with dependable power and absolutely faultless reliability, even under race conditions, so there really is no better engine for the Atom.”

Specifically developed for the Atom 4, MBE ECU engine management system transforms an amazing powerplant into an exotic one, with focus on throttle response and smooth power delivery. Launch and traction control systems are newly available features built into the electronics of Atom 4. Atom 4 also features an available boost controller to adjust and optimize turbo boost levels for different road and track conditions.

An optional Performance Package increases the power output to 350-horsepower via performance ECU tuning, a three-stage boost controller and a performance exhaust system. Included is also a higher efficiency radiator. A limited-slip differential and an adjustable traction control system round out the package. 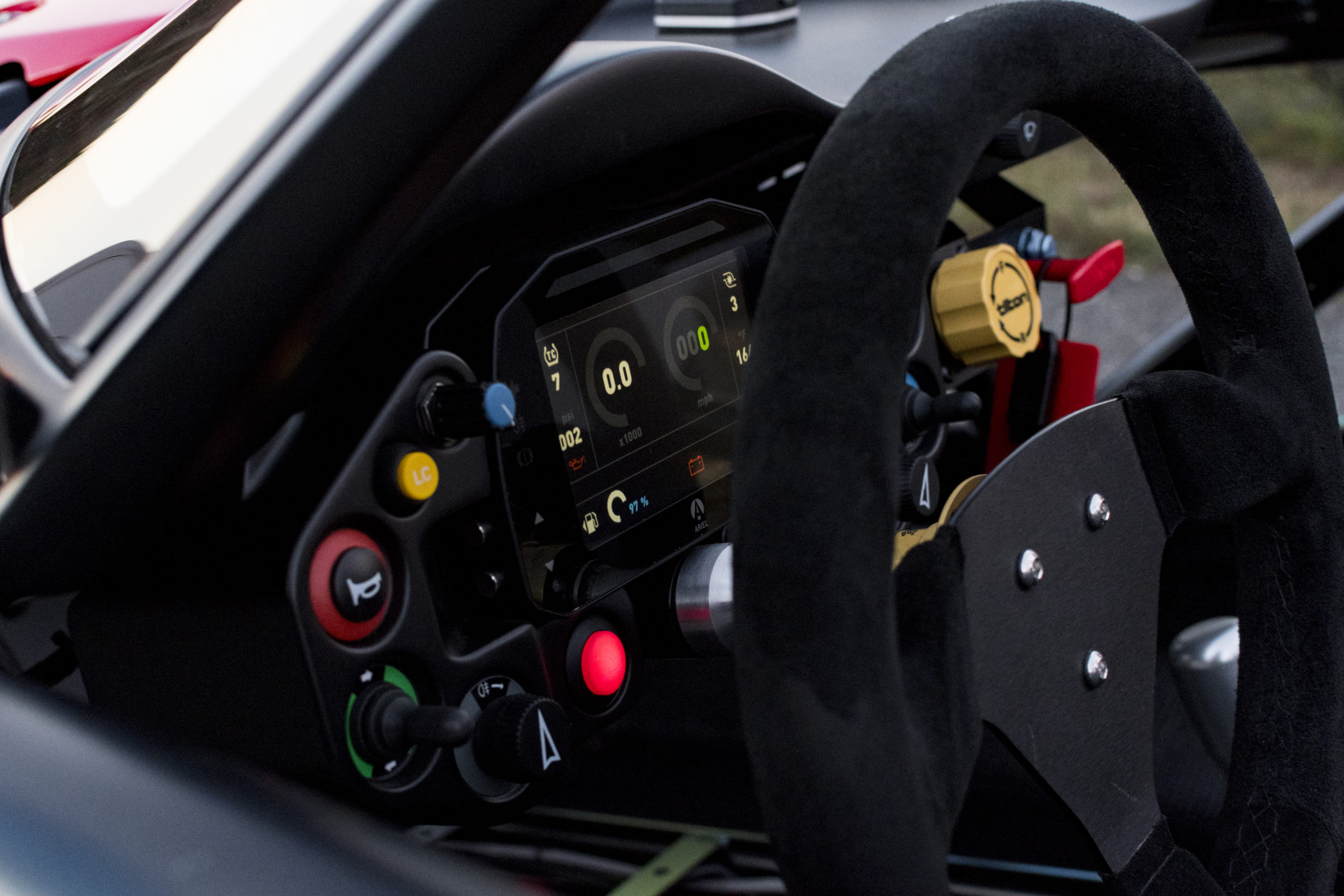 Moving up in size, the Atom 4 sits on 16×7-inch front wheels and 17×9-inch rear wheels. Multi-spoke alloy wheels are standard fitment. In a first for Ariel, the Atom 4 has the option of full carbon wheels. These represent a weight saving of nearly 50% over an alloy wheel and, along with new aluminum hubs, significantly reduce the unsprung weight.

The staggered tire setup is new in the Atom 4. The front tires are 195/50-16 and the rears are 255/40-17. The combination of new suspension and larger tires contribute to the Atom 4 having more mechanical grip than any previous Atom.

An all-aluminum pedal box with brake, clutch and throttle pedal is supplemented by the optional cockpit adjustable brake bias. Goodridge stainless hose for both brake and clutch hydraulic systems is standard fitment.

The Atom 4 features an all-new look and while recognizably an Atom, every panel on the car is new. Working in partnership with TotalSim, Computational Fluid Dynamics (CFD) experts, and in keeping with the original Ariel ‘form follows function’ philosophy, major aerodynamic improvements have been made in every area of the car. Drag has been reduced, downforce increased and mass flow rate to radiator, intercooler and air intakes greatly increased. A shift in aero-balance has been achieved to give neutral handling and more precise control at the limit. 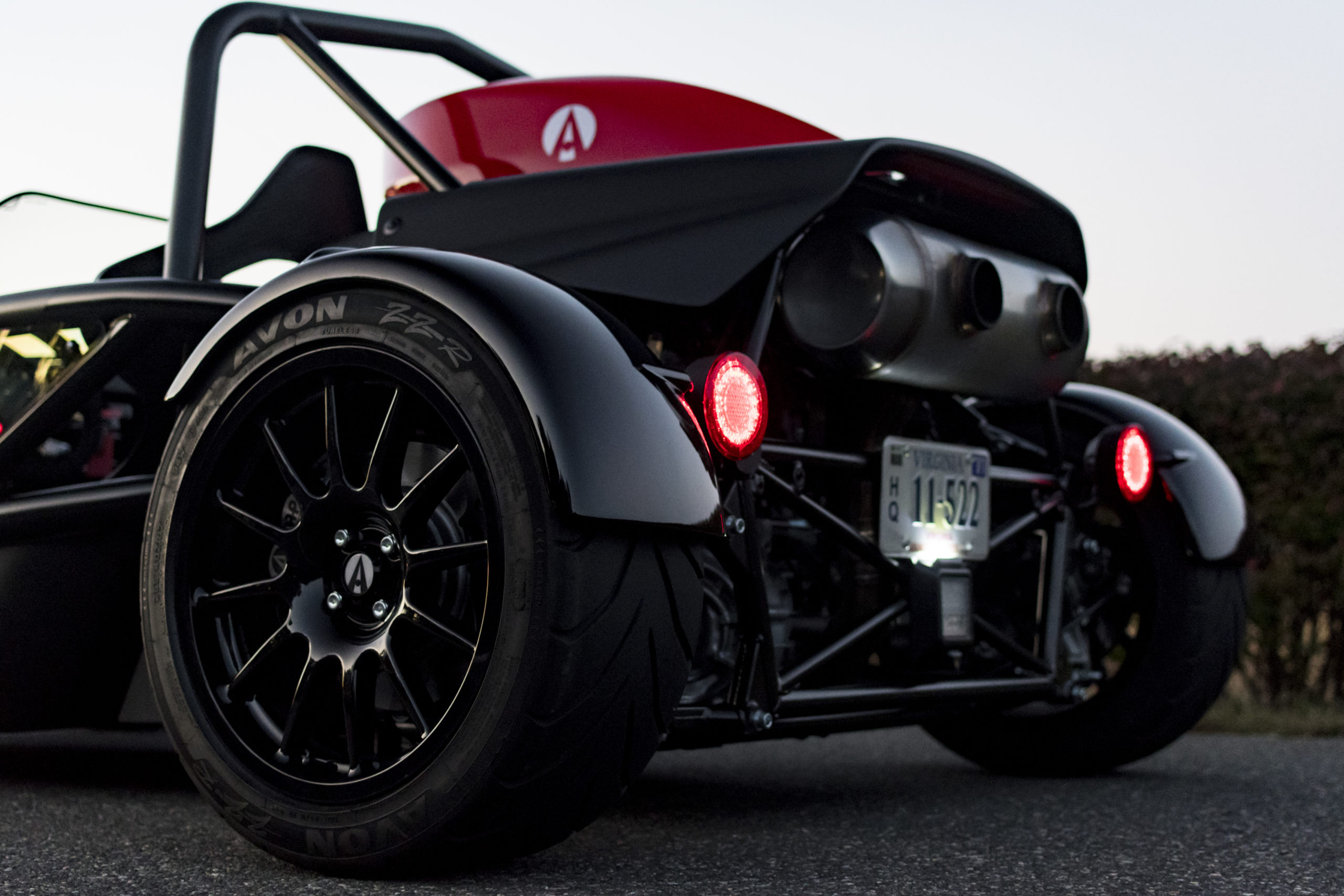 Immediately noticeable is the disappearance of the familiar central Atom roll hoop, now enclosed under the air intake bodywork, which itself has been reduced in size. This has greatly improved air passing over the rear bodywork and controls airspeed going through the ram-air system. Similarly, the new nose cone has smaller openings and internal ducting to reduce drag and decelerate airspeed, maximizing efficiency through the front-mounted radiator. The intercooler mounted behind the tub, in a low-pressure area, keeps the unit close to the engine and is also supplied with air from under the car, optimizing cooling efficiency.

Bodywork will be available in full carbon for many of the body parts, reinforcing the ‘less = more’ Ariel philosophy of performance through less weight.

Additional storage space has been included under the removable front body cover, extending the cubby box, together with access to the new hydraulic system. Individually adjustable single seats combined with a comprehensive study into ergonomics have subtly repositioned pedals, steering wheel and instruments. An additional two inches of cabin length and an inch of width has been added.

The new switch panel features all controls within finger reach of the 310mm suede steering wheel including lighting, indicators, adjustable traction and launch controls. The central display, a full-color TFT screen made for the Atom 4 by AIM, can be scrolled through multiple menus for road, track or set up use. The instruments also have gear position and shift lights as standard, plus provision for real-time race track data-logging. The screen also serves as a display for the new optional back-up camera.