This article originally appeared in the February 2023 issue of THE SHOP magazine.

“Is drag racing dying or is it dead?”

That’s a real question, believe it or not, I often get asked and it’s darn hard to answer. After attending the opening night of the weekly Thursday Night Thunder at Irwindale Drag Strip in Irwindale, California, last year, however, I’d have to say it’s alive and well, at least at the local level.

It took us about 30 minutes to get parked after entering the gate and there were 250 racers who paid $40 each for five hours of frantic 1/8-mile fun. Spectators paid just $20 and kids 12 and under were free.

We were there to watch Kelly and Paul Anderson campaign the crowd-pleasing, wheel-standing 2000 Chevrolet Camaro “Stacy 2.0.” Kelly wrecked the original “Stacy,” but that’s another story.

The pair, who have been married for 32 years and have raised four kids, are relatively new to drag racing, having started in 2019. Kelly, a certified health coach, began with her street car but, after scoring a perfect reaction time, hubby Paul soon splashed out on their first Camaro.

“I race every Thursday from January until November,” says Kelly, “plus test days and special events and I typically make hundreds of passes that, I’m told, equate to about 1 million impressions.

“After I wrecked ‘Stacy’ we purchased another 2000 Camaro and our race engineer, Martin Charles of MC Automotive, gutted her and swapped everything from the engine to the rear end into ‘Stacy 2.0,’ which is the car I race today,” she continues. “My best 1/8-mile time is 6.07 seconds at 111 mph. I could go faster if we kept the front wheels on the ground, but wheelies are beyond thrilling for the spectators and for me so, for now, they’re part of the show.”

The show, or entertainment, is really what it’s all about, and we are a fickle audience. We don’t keep watching the same show over and over, no matter how big. We’re always looking for something different, something new.

For example, last year’s NASCAR Busch Light Clash at L.A.’s Memorial Coliseum apparently drew some 50,000 spectators and 4 million viewers. Right or wrong, good or bad, it was a bold move to attract a new audience.

Something else pulling in huge audiences is Discovery’s “Street Outlaws,” which began in 2013 and includes several spinoffs. Like it or not, it’s entertainment for many and “Street Outlaws: Memphis” has, according to Parrot Analytics, something like 4.7 times the demand of the average TV series in the U.S.

While “SO” is not really street racing—they say it’s a “controlled environment”—the connotation of racing on public roads has solicited criticism in some circles and threats from some of the major sanctioning bodies, but to no avail. It’s too popular, and what drives its appeal is the drama, real or manufactured, along with the personalities and the diversity of race vehicles.

Mainstream drag racing used to be about innovation providing a venue for the weird and wonderful, but somewhere along the line it got legislated down to cookie-cutter cars that the public no longer relates to. Some could argue that the public doesn’t matter, but it matters to the sponsors. It’s no longer about butts in seats, but eyes on screens.

Drag racing commentator Cole Coonce recently had this to say:

“(Last) February, the 10,000-hp modern nitro dragsters were testing at Phoenix on the same weekend as Sick Week, which was five days of 350 of the fastest street cars shooting it out in Florida. Both events were livestreamed. On the day I tuned in to both on YouTube, 160,000 people had watched the Street Legal shoot ’em up and 800 people were watching the professional cars test and tune—800.

“These numbers are unscientific, but the reality is that 160,000 YouTube viewers watching street cars on skinny tires are about what watches a sports channel broadcast of nitro qualifying at a national event.”

A quick search shows “Street Outlaws” appears to enjoy something like 2 million viewers. You do the math.

Street racing remains a problem in many communities. On Dec. 25, 2020, photographer Daniel “Dano” Patten died when two cars street racing in Carson, California went out of control and veered into spectators.

One promoter looking to address the dangerous illegal street racing problem is Andy Marocco, who has been trying to organize legal drag races in Banning, California for more than 20 years. Finally, in 2020, (the weirdest of years), he pulled it off and the 1/8-mile Banning Street Drags were held at the Banning Municipal Airport—but, sadly, not for long.

“This new generation has grown up with reality TV shows about street racing. They watch this and think, ‘Now, this is something I can relate to!’ It’s easy to be attracted to the bad boy image, social scene and the drama of competition that is part of outlaw street racing. For them, it’s a lifestyle and a passion. Professional drag racing offers none of this to them.”

Drag racing is in a state of flux, he believes, due to a generational transition taking place.

“The fans and racers of today are a new generation that has not been excited by or can’t relate to professional drag racing,” he states.

Steve Gibbs, a man on the front lines of drag racing most of his adult life and organizer of the popular Nitro Revival, agrees.

“It appears to me that drag racing is in the midst of major changes, as the healthiest elements seem to be more grassroots-oriented as opposed to the ‘big show,’” he says. “Professional competition, while impressive performance-wise, has been on a decline in recent years in all aspects—participation, spectator attendance and qualified tracks. In my opinion, the cost to compete on a professional level is unsustainable and has resulted in greater interest in more realistic, local-type activities.”

Jack Beckman, who raced for 22 years (14 years professionally) and was the 2012 NHRA Funny Car champion, stepped away at the end of 2020 and returned to his previous life as an elevator mechanic when sponsorship for his ride with Don Schumacher Racing dried up.

“It’s increasingly hard for a sponsor to justify the investment,” says Beckman. “The value has not changed much, although the demographic has aged, but the cost of racing has increased dramatically.”

At the recent Good Vibrations March Meet, nitro was rumored to be $1,900 for a 42-gallon drum. According to Beckman, if a Funny Car gets through to the finals it can use as much as 130 gallons of nitro—that’s around $6,000 just for fuel.

Now add in all the other related costs of getting a team to and from the races and you have a hefty bill—typically about $3 million to field a Fuel car for a year.

“John Force can justify that investment,” says Beckman. “He’s worth whatever a sponsor wants to pay. But it’s very difficult for everybody else to provide the kind of ROI that a sponsor should and needs to see.”

WORK TO BE DONE

Last year, Susan Wade interviewed veteran Top Fuel owner Mike Salinas for “Autoweek” with a tag line that said: “If I had the job of running this… I would do it a different way.”

Salinas grew up the hard way, making his money in scrap. Among many telling quotes in the article regarding drag racing’s biggest stage, Salinas says, “Just look around. There’s a big disconnect. Look at the age group. There are no young kids here; there’s very few. To sustain a culture, any culture, what does it take? That will tell you how many more years and this will all be gone.”

Meanwhile, the opinion of Gibbs from Nitro Revival that the times are a-changin’ was confirmed when I spoke to two promoters—Rocky Phillips, organizer of the Eagle Field Runway Drags, and Mike Thompson of Portland’s Estranged Car Club.

Phillips, who has been organizing twice-yearly drags on a private crop duster strip in Firebaugh, California, says, “The past two years have been crazy, but we’ve enjoyed steady participation. In fact, I had to turn down some TV coverage because we just didn’t need the exposure at the time. That said, there is room for growth.”

“Drag racing is alive and well up here in the Pacific Northwest,” he reports. “Sixty-five miles northeast of Portland in Toutle, Washington is Riverdale Raceway—an 1/8-mile outlaw track. You drive through the gate and it’s like a time machine took you back to 1962. Our club has been racing there for years and I’ve always hankered to organize our own event, which I did as an invite-only event three years ago. The Estranged Drag/Show took place Aug. 19-21, 2022, and you could go back in time for three days of pre-1964-style nostalgia race cars and hot rods racing heads-up.”

Maybe traveling back to simpler times is what people desire. Having got its organized start in Goleta, California around 1948-49, drag racing is now 70-plus years old and that is reflected in the demographics—you can’t see the aluminum for the gray hair.

Not only are the fans getting older, but some venues are disappearing.

Time was you could race three or four times a week in Los Angeles. Steve Hope of Rat Trap Racing recalls, “We’d test on Wednesdays at Irwindale, Orange County (OCIR) or Lions, then move to Ontario to race on Friday, Irwindale on Saturday and OCIR on Sunday.”

Sadly, and for various reasons, all of those So-Cal strips are long gone.

Commentator Bob Beck says, “L.A. recently lost Auto Club Dragway at Fontana, which leaves only Irwindale (at a different location form the old Irwindale) and Pomona, which is used only twice a year.”

The noise generated by Pomona, which is situated within a dense urban development, is intense and folks from miles around can hear what they call the “Pomona Dragon”—leaving some to predict, “It’s only a matter of time.”

All this and we haven’t even broached the “carbon footprint” issue. Not only are we talking about the consumables generated by the actual racing, but also the gas, oil and what have you used by everyone getting to and from the events.

Of course, the pandemic has also had an effect in that overseas fans have not had an easy time trying to visit U.S. drag racing events. Testing and quarantine requirements have prevented fans from Australia, Europe, New Zealand and Scandinavia from visiting, though they are beginning to trickle back in as travel restrictions are slowly lifted.

“Entertainment has to be unpredictable and there has to be the potential for the viewer to see something they have never seen before. Modern drag racing is something we have seen ad nauseum. It is one 3-second riff driven into the ground—it’s like a pop song without any chord changes.”

I couldn’t agree more, which is why I believe the future of drag racing—and for shops that serve these customers—will depend upon the fun and excitement found at the grassroots level in places like Kelly Anderson’s pits at Irwindale’s Thursday Night Thunder.

Her pit area is full of fans, family and friends. Her car reflects her personality with its purple lighting. She puts on a good show with strong burnouts and speed-sapping wheelies that she and the spectators love.

What’s not to like—that’s entertainment! 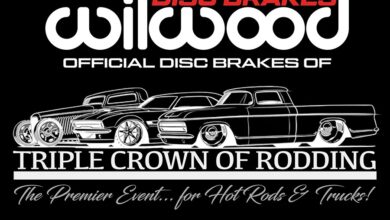