This year’s PPG Dream Car awards, one of the most esteemed prizes on the show car circuit, were presented to two trucks at the Goodguys 18th PPG Nationals.

The Bailey father-son team acquired their now-flawless Chevy in 2014 after it was originally handed down from a family member in 1972. The Baileys worked evenings and weekends in their home shop to give the truck its redo. They achieved the award-winning finish using PPG’s DELTRON 2000 DBC Basecoat and DCU2002 CONCEPT High Solids Polyurethane Clear with PPG colors Fender Guitar Surf Green and 1957 Chevrolet India Ivory.

Robert Anderson entrusted his Ford pickup to Steve Legens at Legens Hot Rod Shop in Martin, Tennessee. The shop turned the truck into a winner, customizing it and sandblasting the body to repaint it a custom-mix glossy green. Legens and painter Keenan Hailey chose PPG’s ENVIROBASE High Performance waterborne basecoat along with water-compatible GLOBAL REFINISH SYSTEM D8152 Performance + Glamour Clearcoat and D8372 Slow Hardener to produce the truck’s head-turning appearance and earn a PPG Dream Car award, according to PPG.

The three-day PPG-Goodguys event displayed more than 6,200 custom cars and trucks and attracted over 75,000 auto enthusiasts. The PPG Dream Car awards are given to the two vehicles (cars or trucks) that best exhibit the outstanding use of color, design, gloss and execution in a paint job. 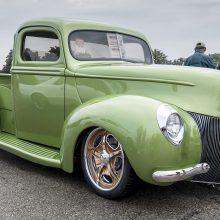 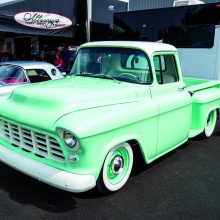