The car is designed with a “dual personality,” according to Nissan, meaning it’s meant for the day-to-day commute, as well as outdoor adventures on the weekend.

The Gripz Concept has the silhouette of a sports car with a raised ride height for more challenging driving conditions.

The Nissan Gripz Concept is equipped with an EV technology-based Series hybrid system, similar to the Nissan LEAF.

“Nissan pioneered the idea of the compact crossover, and this is reflected in the enormous popularity of Qashqai and JUKE and the resulting growth of the market segment as other manufacturers play catch-up,” said Shiro Nakamura, senior vice president and chief creative officer of Nissan. “While the Nissan Gripz concept is not seen as a direct replacement for either of those two iconic vehicles, it does show the extremes to which the compact crossover can be pushed.”

The Gripz concept features a carbon frame over which expressive body panels are placed, according to Nissan. Exposed carbon elements spear through the design, accentuating features such as the boomerang-shape given to the leading edge of the front door structure. Gripz has four doors-with deep dihedral front doors that swing out and up when opened-and a pair of rear-hinged half-doors behind. There is no B-pillar, allowing easy access to the 2+2 interior.

Embedded in the lamps are forward-facing cameras that record every drive.

Boomerang-shaped running lights sit above the lamps, on top of the front fenders and denote the demarcation line between the matt-black bonnet and the red-orange main body color.

More matte-black can be found on the extended wheel arches, the pinched and indented triangular sill (raised to increase ground clearance) and the A-pillar leading to the floating roof. The roof features a central glazed panel with bullet grey-colored composite panels on either side over the seating areas.

At the rear, a dramatic truncated matte-black Kamm tail gives the concept a “codatronca” effect, while beneath the tailgate sits a pair of chromed trapezoidal exhaust pipes, according to Nissan.

The seats and center console are directly inspired by bicycles, as are the door pulls that are shaped like saddles from a racing bike. The three-spoke steering wheel, meanwhile, replicates the car’s road wheels, right down to the special graphics found on the tire sidewalls.

Like the Nissan Sway concept and recent production cars, the Nissan Gripz concept has a “Gliding Wing” instrument panel. 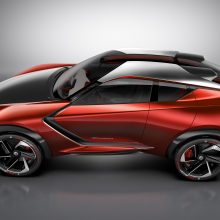 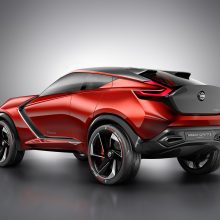 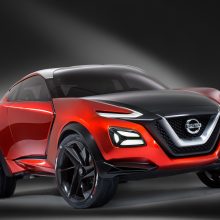