*Scroll below to view a photo of what “The Uncatchable” looked like when Aaron Brown first found it.

Aaron Brown of The Garage Shop in Catawba, North Carolina dedicated his life to building some of the coolest cars and trucks the world has seen, but nothing like his most recent find.

“I wanted something unique, something that has never been done before,” Brown said. “I spent weeks searching the Internet and making hundreds of calls to find the perfect vehicle. Then I found it on RacingJunk.com, deep the in heart of Texas: a 1939 Ford and I knew that was the vehicle.”

Named The Uncatchable, Brown’s 1939 Ford street legal, land-speed rat rod was built from the ground up in his shop during the course of eight months. The concept for the vehicle came in 2013 when he visited the Charlotte Auto Fair. Brown noticed a stack of old hot rod magazines sitting in a milk crate at one of the booths and purchased the entire stack. While he has always had a fascination with hot rods, Brown said reading the magazines gave him a much greater understanding of original hot rods.

“I wanted to honor the pioneers of speed who built these hot rods in their garages using whatever parts they could find,” Brown said. “They spent every dime they had and built these machines on their dirt floor garages. We wanted to keep that tradition alive so we went with the ’39 Ford truck.”

Brown has decades of experience as a NASCAR fabricator and decided he would utilize current NASCAR technology with old rodding concepts to build the ultimate street legal, land-speed truck.

“The Uncatchable is the first of its kind,” Brown said. “Alot of people build outdated Cup cars for land-speed racing or they build hot rods, but no one has combined that technology to build a vehicle like The Uncatchable.”

“The Uncatchable” made its debut at the Charlotte Auto Fair in April. The truck turned many heads, as 1,000 polaroid pictures were taken in just two days for fans to take home as a memento. Since May, the truck has competed twice at the Ohio Mile and earned multiple records. 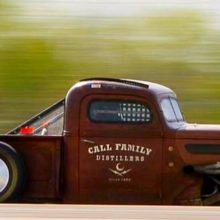 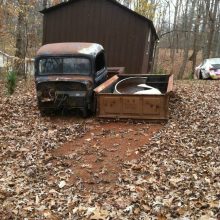