With vertically rising doors, a sky-high expansive windshield, and the promise of hitting 60 mph in 3.2 seconds, the Model X by Tesla Motors may just blow the doors off SUV/crossover design convention. The vehicle-with all-wheel drive and a 90 kWh battery-will carry a price tag exceeding $100,000.

Model X will debut in two models: the speedy P90D, and more economical 90D model. Specs, according to Tesla Motors, are as follows:

Falcon Wing doors allow easy access to second and third row seats from any parking space in the Model X.

With only a foot of clearance, Falcon Wing doors articulate smoothly up and out of the way, allowing passengers to enter from both front and rear directions. The side and overhead opening is so large that parents can buckle children in without ducking and without bumping their child’s head on the roof, according to Tesla Motors.

Tesla Motors claims the Model X has the largest all-glass panoramic windshield in production, providing an unparalleled view of the stars and sky above. Optimized solar tinting and obstruction-free view creates unlimited visibility for the driver and all passengers.

Model X is the first electric vehicle with a 5,000-pound towing capacity, according to the car maker.

Seating for Six or Seven

Model X seats seven people in three rows. The second-row seating is mounted on a single impact absorbing post and is independently reclining. The third row seats fold flat when not in use.

The floor-mounted battery in the Model X lowers the center of gravity so that the risk of rollover is almost nonexistent, according to Tesla Motors.

The battery structure strengthens Model X against side impact intrusions. And without a gasoline engine, the large front trunk acts as a giant impact-absorbing crumple zone, according to Tesla Motors.

Model X is able to achieve 250 miles of range in part because of aerodynamics. Model X’s drag coefficient (at 0.24) is 20-percent lower than the next best SUV, according to Tesla Motors.

In addition, an active spoiler deploys to one of three preset positions when Model X, optimizing visibility, highway efficiency and stability. 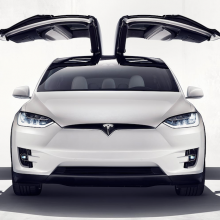 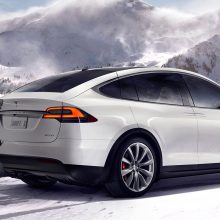 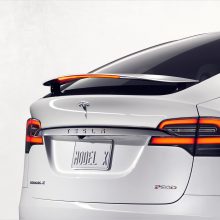 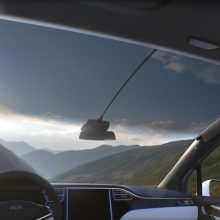 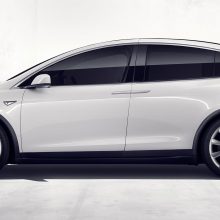 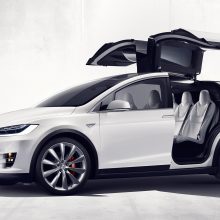 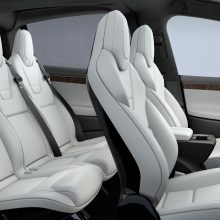 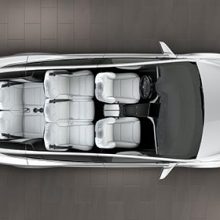 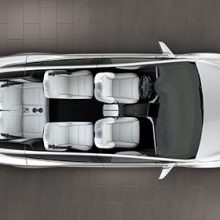 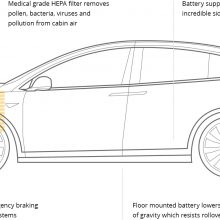